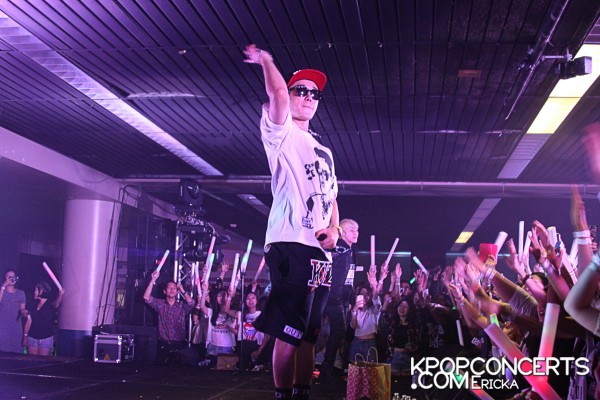 Korean hip hop artists Bumkey and San E partied all night long with their L.A. fans for their first joint concert in the United States!  Held on August 23 at the Hollywood Park Casino, the show kicked off with a batch of phenomenal opening acts – rappers Mike B, Sikboy, and JimGoon wowed the crowd with their sick raps while 7.1.4 Crew’s Beat Rhino lived up to his name as he delivered a remarkable beat box set. 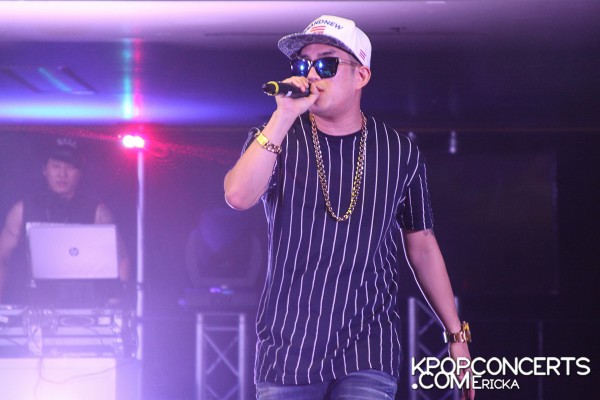 First of the main acts to take the stage was Bumkey with one of his newer songs, “Home.”  Following a successful U.S. tour alongside Verbal Jint, Kanto, and Beenzino back in May, Bumkey was more than excited to return and perform in his second hometown.  He wooed fans with his honey-smooth vocals as he sang “My Lady” and personally serenaded one lucky fan in the front row with “Love Song.”   Then he performed a medley of songs he was featured in such as “Don’t Be Happy,” “Walking in the Rain,” “Special Girl,” and “Be My Brownie.” 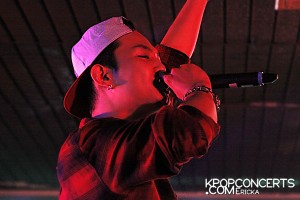 After he had all the girls swooning, Bumkey surprised everyone when he announced his special guest – Kanto!  Together they make up Brand New Music’s hip hop group TROY.  Kanto had his time in the spotlight when he performed his solo debut track, “What You Want” and “Gangnam Women.”  To support their group and label mates, Bumkey and Kanto gifted fans with TROY hats and CDs from Brand New Music artists.  After expressing his never-ending gratitude for the fans’ love and support Bumkey finished off his set with “Bad Girl” and “Attraction.” 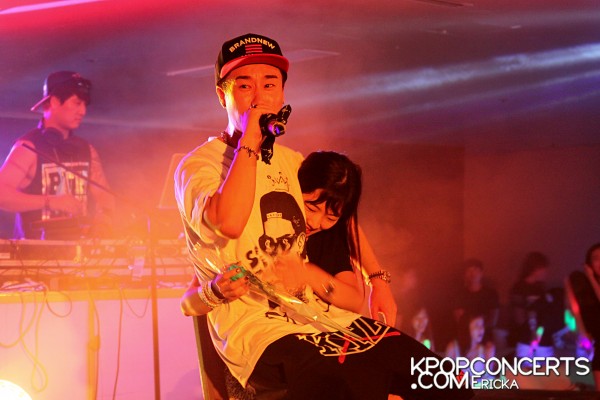 To close off the night, the one and only San E took to the stage.  From start to finish San E and the fans fed off each other’s energy as they jumped and sang together to his “Breakup Dinner,” “Lovesick,” “Mr. Lee,” and many more.  During “Lovesick,” San E fulfilled the ultimate fan service as he picked a lucky fan out of the crowd and brought her on stage.  Throughout the song he gave her flowers, took a selfie with her, and even sat on her lap! 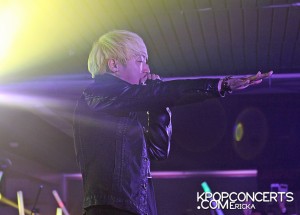 San E, who is currently the judge on the hit hip hop music show, Show Me the Money, could not have a show without showcasing a little bit of freestyle!  He brought onstage JCOP from JINJO Crew who accompanied San E’s mind-blowing freestyle rap with his equally jaw-dropping beat boxing performance.

The rapper’s charismatic personality had the fans’ undivided attention as he performed other tracks such as “A Midsummer Night’s Sweetness”  and “Story of Someone I Know.”  To cap off the show with a bang, Bumkey joined San E onstage as they performed their recent joint track, “Body Language.”

Overall, Bumkey and San E did not disappoint and went above and beyond everyone’s expectation.  With talented and charismatic artists such as themselves, it’s only a matter of time until Korean hip hop takes over the music charts and gives K-pop stiff competition.

NASTY NASTY Shows You the Moves for "Knock"