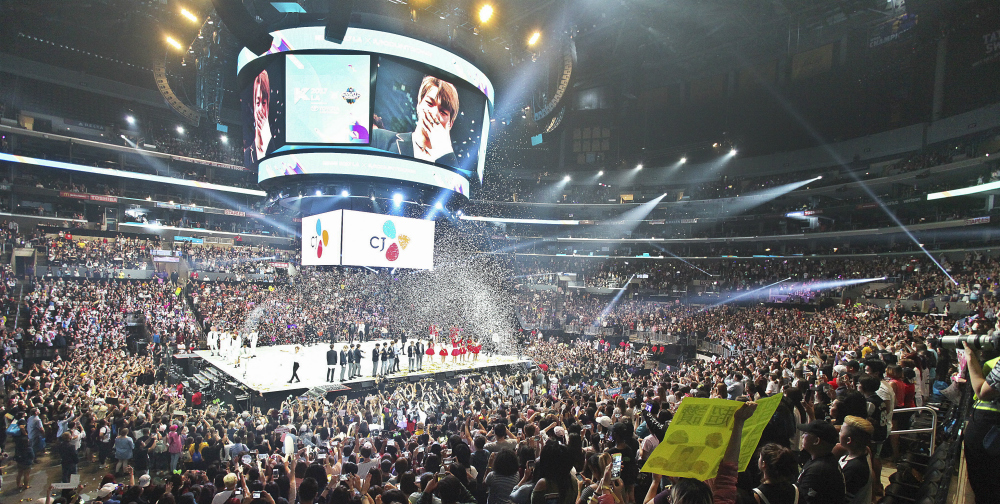 Day 2 of the concerts brought some of Korea’s hottest artists, including NCT127, Astro, Heize, K.A.R.D, GOT7, and the top rookie group of the year, Wanna One. Kim Tae Woo, of the legendary idol group G.O.D, and WM Entertainment’s sole girl group, Oh My Girl, also performed at the concert as special guests.

Walking out onto the middle of the stage was Kevin Woo, former vocalist of idol group U-KISS, who introduced the pre-show performers for the night- Iamnot. Iamnot, a Korean indie rock band, consists of three seasoned musicians on guitar, bass, and drums. Despite being an indie band, the members showed no signs of nervousness, and used their powerful stage presence to capture the attention of the audience. They performed their songs “Psycho” and “RBTY,” as well as a cover of Bruno Mars’ “Uptown Funk” that got the whole the whole audience dancing and singing along. 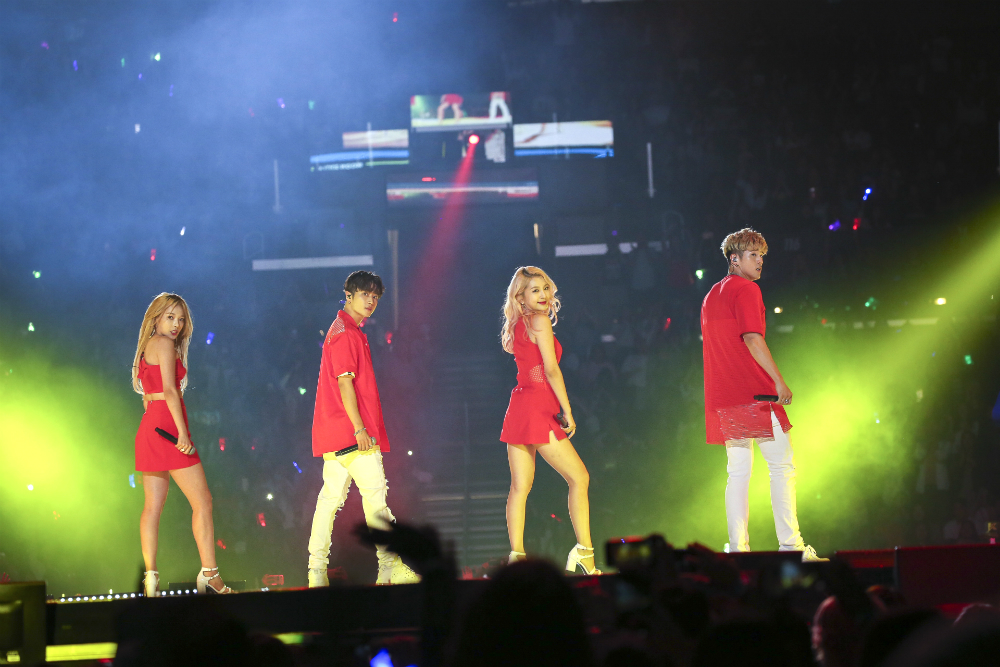 The first act of the night was co-ed group K.A.R.D, who gained popularity before their official debut through their pre-debut releases “Oh Na Na,” “Don’t Recall,” and “Rumor.” They performed “Don’t Recall” before introducing themselves to the audience in English. It turned out that  Somin’s birthday was coming up on August 22nd! The audience sang  “Happy Birthday” in unison, moving Somin to tears. They followed up with their newest title song “Hola Hola” and closed out their performance with their first pre-debut song “Oh Na Na.” 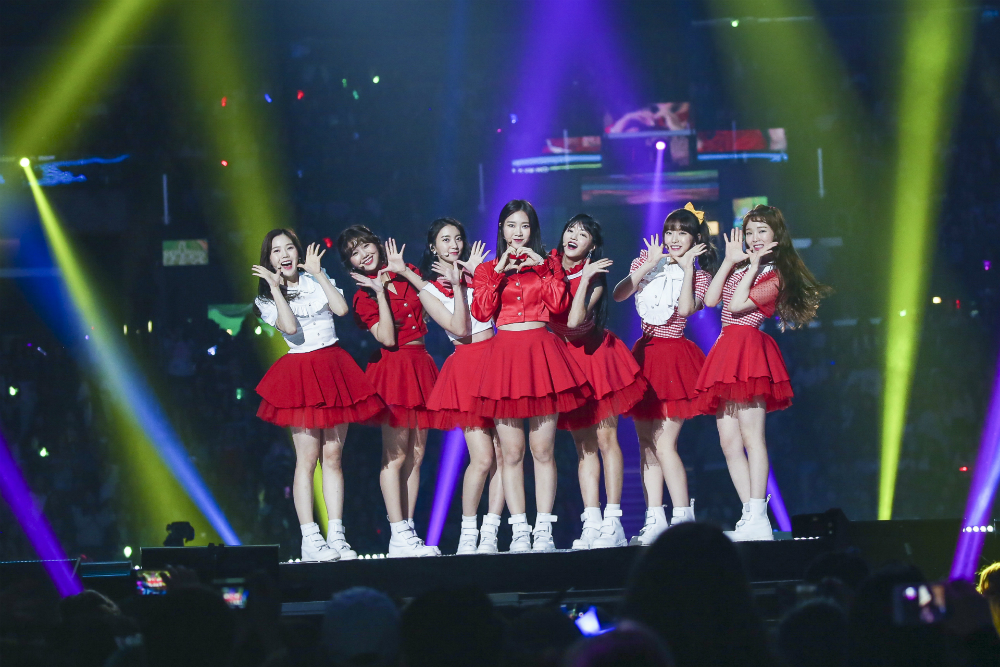 Next up was special guest Oh My Girl, who brought a pop of freshness to the concert with their song “Coloring Book.” They then finished their performance with their song “Closer,” showing off a more mature side of themselves. 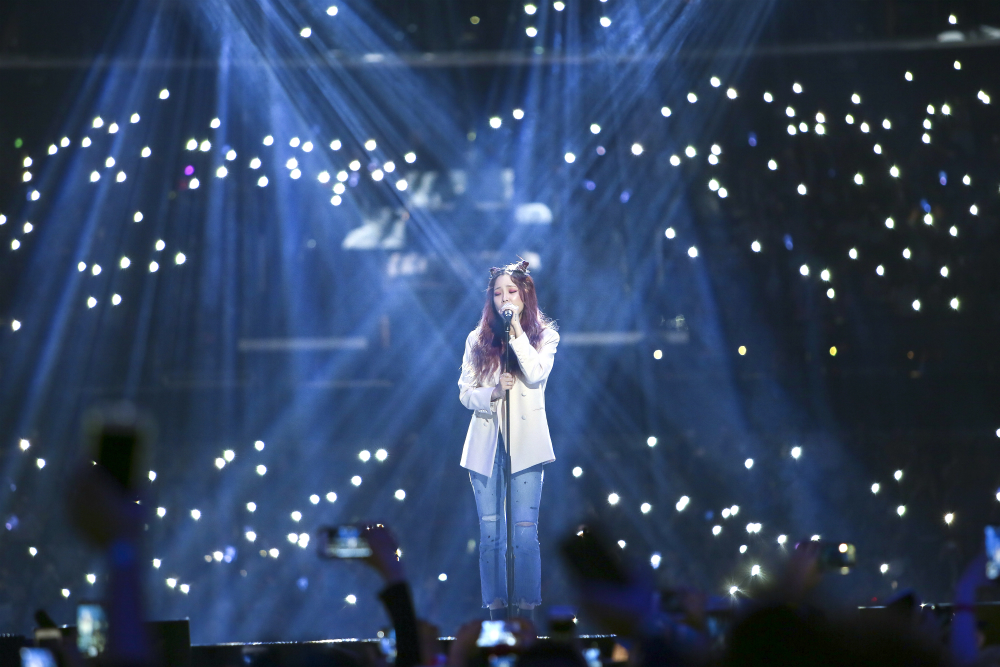 The next artist in the lineup was singer, songwriter, and rapper, Heize. She showed off the title song of her newest album, Don’t Know You, and the song “Star’”from the same album. Before performing “Star,”  Heize was shocked and moved to tears when the crowd turned on their cell phones’ flashlights to create a “starry night sky” for her stage. Even without choreography, Heize had the audience moving to the music. 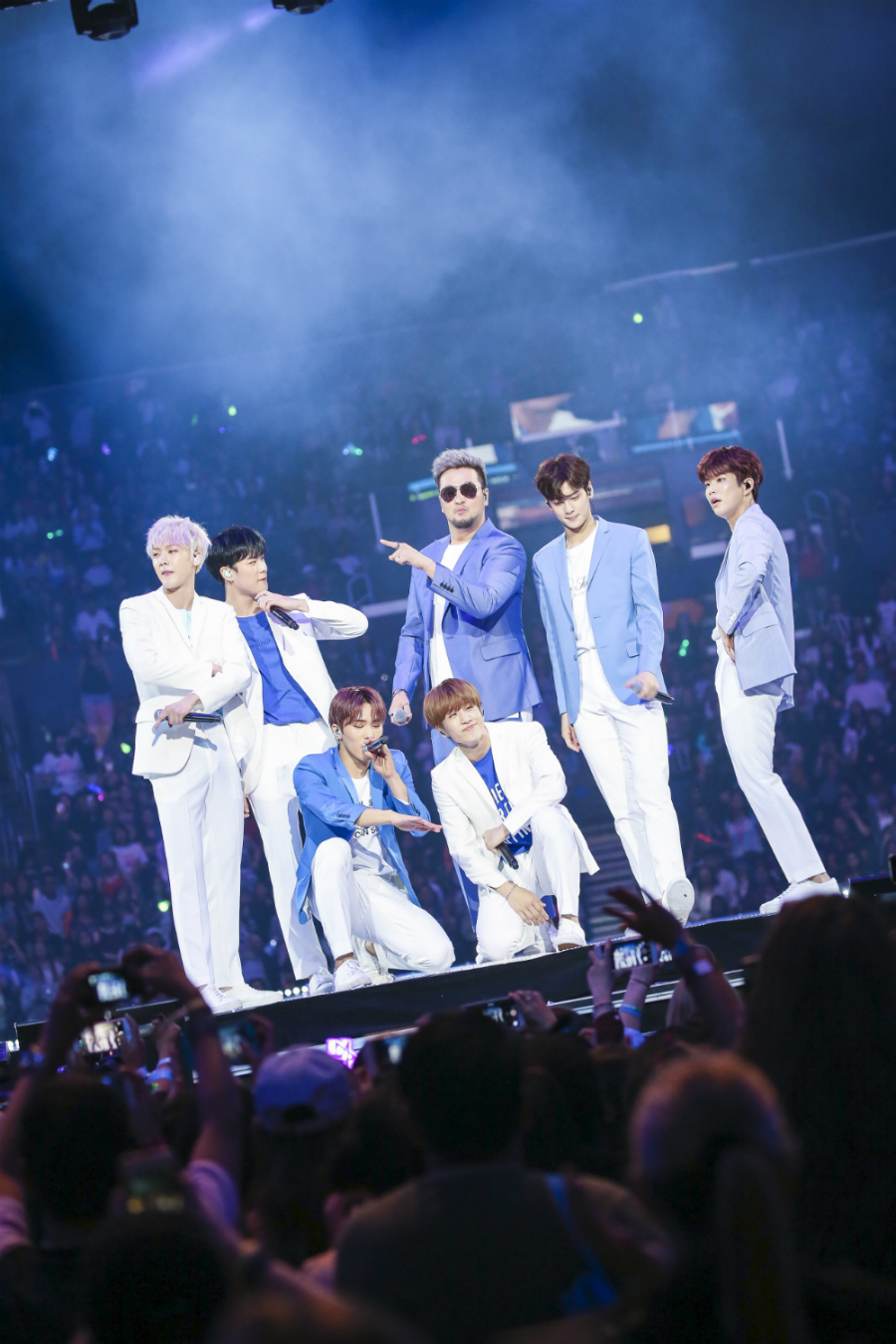 Next was a special collaboration stage between Astro and Kim Tae Woo from G.O.D. Astro performed a cover stage of G.O.D’s hit songs, “The Place Where You Should Be,” and “One Candle.” Kim Tae Woo joined Astro on stage to perform “One Candle,” and depsite being 17 years their senior, he was able to pull of a seamless performance with his junior group. Astro then passed the stage to Kim Tae Woo, who performed his new song “Following” and his hit track “Love Rain.” Although he was the “oldest” idol performing at the conert, many were singing along with him throughout his entire performance. 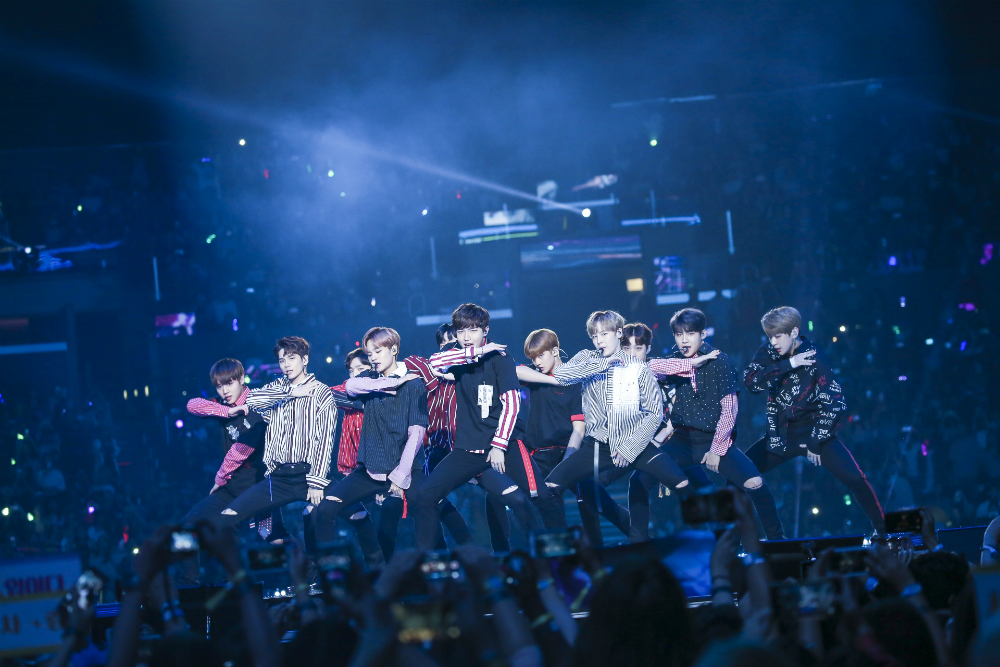 The next artist was the highly anticipated rookie group, Wanna One. The members of Wanna One were chosen by the people of South Korea as the winners of popular competition show Produce 101. Although their official debut was less than one month ago, they are quickly rising to become one of the top idol groups in Korea, having already filmed a variety of TV commercials and taken home multiple first place trophies. They kicked off their performance with their debut title song, “Energetic.” Even though it was their first performance in the States, their performance was “energetic” and stable, and received much love from the audience. They performed another song from their debut album, “Burn It Up,” before leaving the stage. 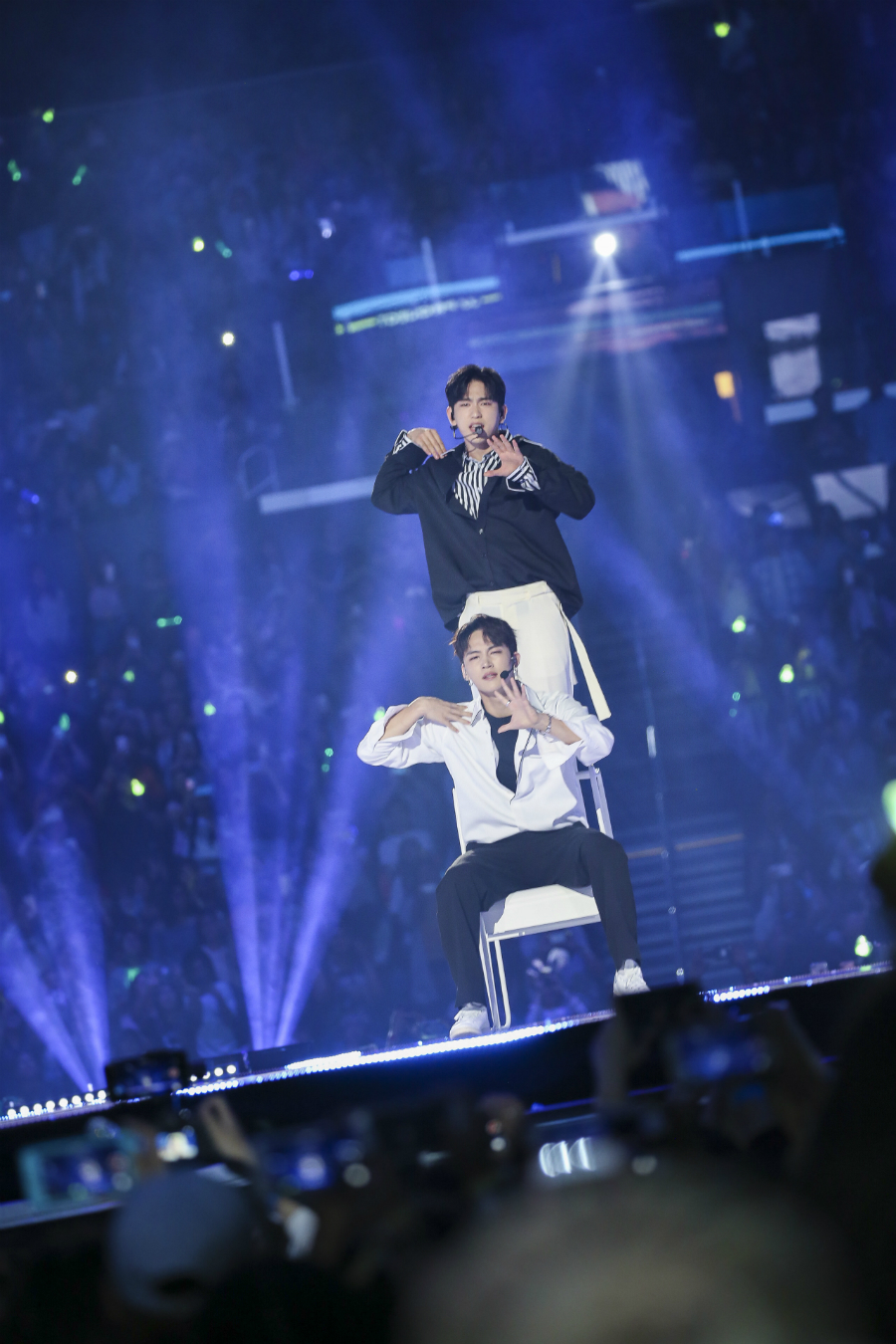 Next was GOT7’s JB and Jinyoung, returning as the unit JJ Project for the first time in five years. JB and Jinyoung first debuted under the unit name ‘JJ Project’ in 2012 with the song “Bounce,” which was a fast-paced, energetic song with a base in hip-hop. This was two years before they joined members Jackson, Mark, Youngjae, BamBam, and Yugyeom to form the group GOT7. They showed off their new song “Tomorrow, Today” for KCON, utilizing chairs and backup dancers in the their performance. Their new song showcased a more mature and rhythmical side to the unit in comparison to their debut song. Their new album, Verse 2, debuted at No.2 on Billboard’s World Albums chart, and has topped Korean music charts, such as Bugs and Mnet, as well. 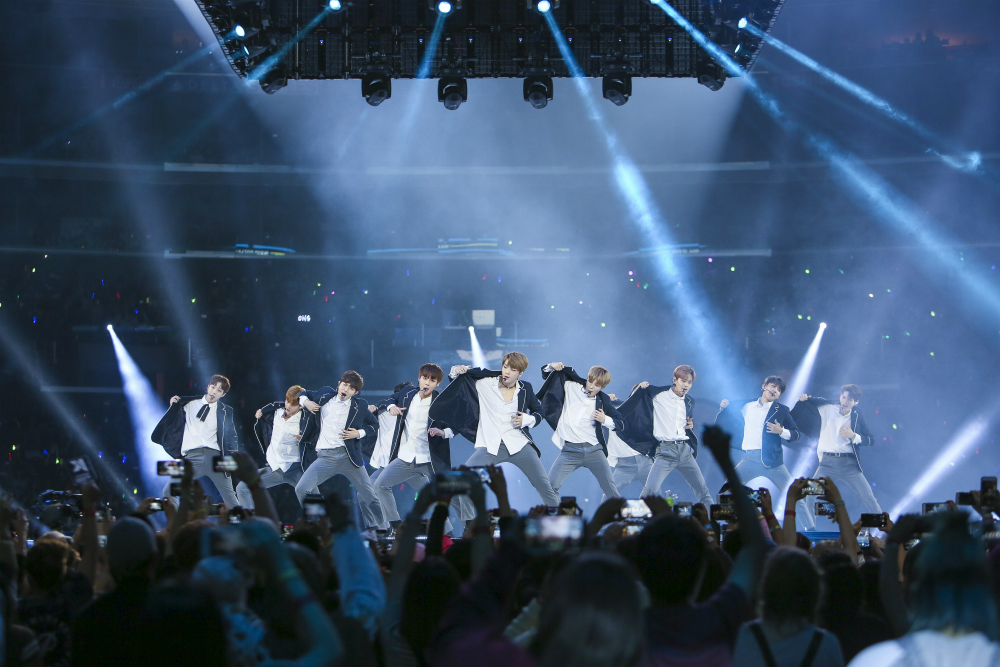 Fans were disappointed that Wanna One’s performance was so short, and just then, Wanna One returned to the stage to perform the most popular songs from Produce 101,’ They started with the song “Never,” which hit number 1 on multiple music charts in Korea. Then, they finished off with the show’s addictive theme song, “Pick Me.” 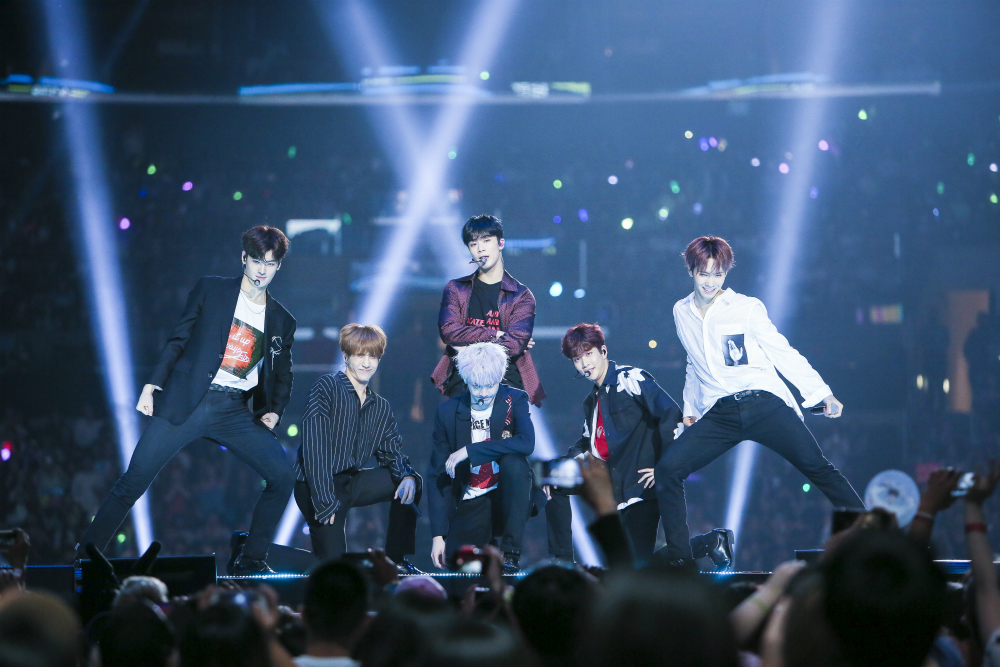 The next artist was rising rookie group, Astro. Although they debuted less than two years ago, this was their second consecutive appearance at KCON LA. They started with their song “Breathless,” and held a special “piñata” event with the audience. The new addition to the KCON concerts allowed for a more interactive experience with the fans. The members  were given the mission to each decorate a T-shirt in one minute, and then pass these T-shirts out to fans in the audience. After spending a few minutes interacting with the audience, they performed a medley of their songs “Polaris” and their newest track, “Baby.” 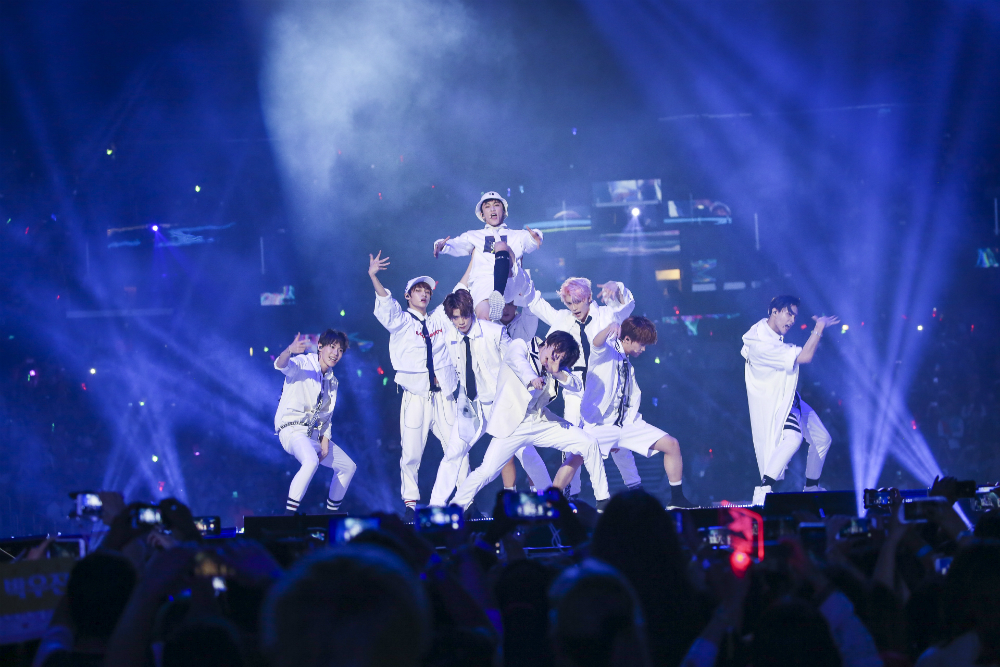 Next was NCT’s unit group, NCT127, who kicked off their performance with a special dance performance. They performed their songs “Firetruck,” “Limitless,” and “Cherry Bomb,” showing off their perfectly synchronized choreography and catchy beats. Not to mention their signature good looks! 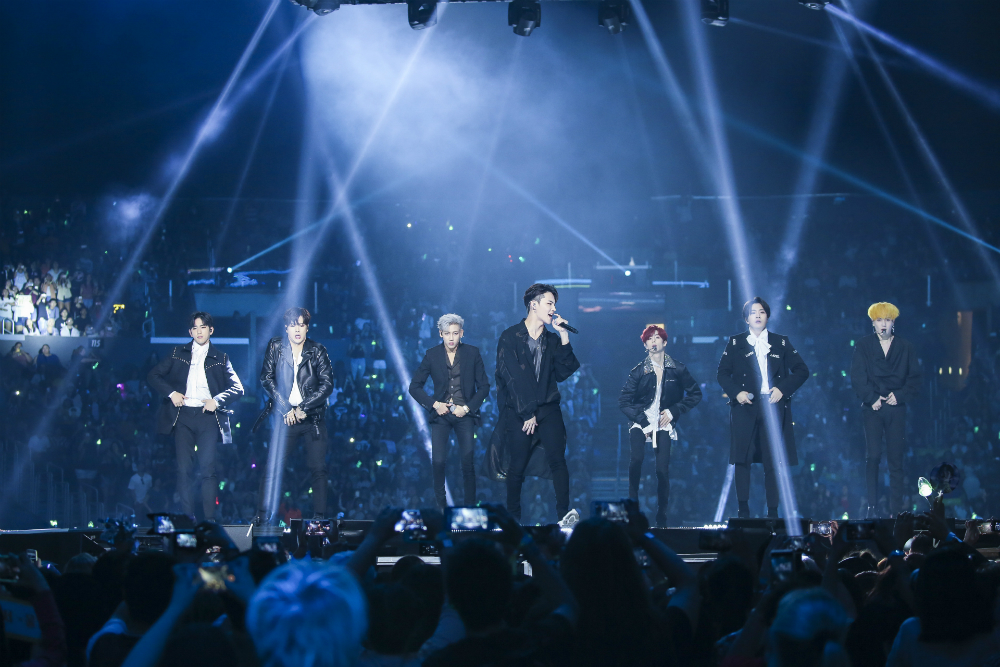 The last performers of the night were GOT7, the headliners of the final night of KCON 2017. They performed their song “Never Ever,” and then stopped to play another “pinata event”. This time, the mission was to propose to a member of the audience. As the camera panned through the crowd, fans throughout the stadium jumped out of their seat and waved frantically to get their attention. The lucky fan was randomly chosen and members Bam Bam, Youngjae, and Jackson each delivered silly proposals to her.  “propose” to her. They calmed the atmosphere with their song “Everyday,” but closed out the show with a bang, performing one of their most popular songs, “Hard Carry.” Their enthusiasm and energy while performing made it clear why they are one of the most loved K-pop groups in the U.S.

And that was the end of KCON 2017. That makes us wonder… who will we see next year?