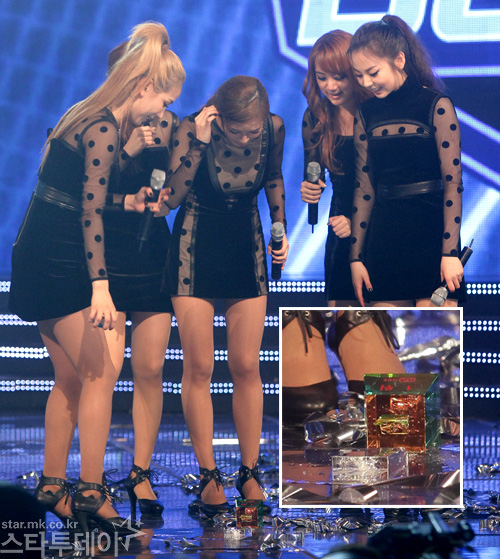 If there’s one thing you shouldn’t do at an awards ceremony, it’s drop the award.

On a live broadcast of Mnet’s “M-Countdown”, Wonder Girls won first place for their song “Be My Baby”. The award meant a lot to Wonder Girls so soon after making their comeback. Unfortunately as the girls were preparing for their encore performance, the trophy slipped and fell to the floor shattering.

Yubin tweeted on her Twitter, “Thank you so much. It’s sad that we broke the trophy that we won after our comeback, but we are so grateful for the win. This is just the beginning and we will do our best. Fighting.”

Netizens replied to the news: “1st place is much more important than a trophy,” “We congratulate you anyway,” “Wonder Girls are impressive,” “What to do about the trophy? Should I make you a new one?“

Their second official album has just been released, “Wonder World” after a year and a half break from the lime light.

Not found any footage of the breaking, but here’s their performance.