United Cube has toured from South Korea to Japan and is now making its way to Europe. United Cube Concert in London is set to to hit the stage at Brixton Academy. Kpopconcerts editors Su Mi and Kiah asked UK fans what they were anticipating from Cube Entertainment’s United Cube concert in London next monday (December 5th).

We’ve found out that Beast have the largest fan base of all the cube acts among UK fans, Beast and 4minute were how most fans got into cube entertainment (Which follows a similar trend among Korean teenagers, whom idol groups are most popular with). However, this doesn’t mean that fans aren’t excited to see G.NA , in which many fans expressed excitement and curiosity as to how her stages will be performed.

Many fans described the acts from Cube entertainment as performers who ‘strive hard for passion’ and also ‘ idols who bring different elements into each of their performances’ , making them stand out from other Kpop idols which suggests reasons  for their ever growing popularity amongst kpop fans all over the world. Fans also expressed how cube entertainment acts seem more like family then just singers under one company.

Fans are expecting strong performances from Cube including: HyunA – Bubble Pop, Beast – Fiction and Fact, Beast – Shock, 4Minute – I Me Mine, G.NA – Banana. We’re hoping that A Pink will be at the concert, and for some special stages/solos.

With the recent release of the track ‘ Trouble Maker’ by HyunA (4minute) and Hyunseung (Beast) , fans are anticipating a special stage from ‘2hyun’, with hope that itll be as electric as the stage which they performed at the MAMA awards in Singapore.

For many, Cube are their bias Entertainment company so they were more than willing to pay the £73 ticket costs (£65 + £8 service charges).  Even for those whos bias company may not be Cube, The concert means alot to them as it means more Kpop in the UK, aswell as global recognition for Cube. For some fans this is the first Kpop concert they have been able to go to go and have expressed immense gratitude towards this amazing opportunity.Fans are also hoping that Cube’s presence in the UK will help to increase Kpop’s popularity in the Western World. 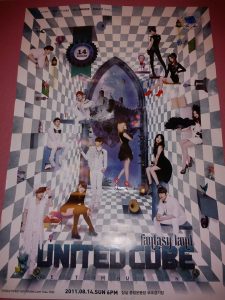 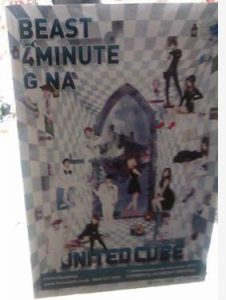 Seoul Plaza in New Malden, also known as Korea Town or K-Town, now have up posters of United Cube London(right). The Poster is almost identical to the poster for the concert in Korea(left) so I would expect the concert to be similar.

With only days left before United Cube concert hits London, Brixton Academy, UK kpop fans are anticipating great stages from the performers in which then Cube entertainment will deliver.

Bang Yong Guk & ZELO reveals MV for “Never Give Up”