After a successful first tour in Europe and thanks to the overwhelming fan demand on fan-initiated concert making service MyMusicTaste, The Rose is set to embark on a second European tour next November.

Paint it Rose 2018 in Europe: 2nd Coloring, presented by MyMusicTaste, will kick off on
November 16 in Kiev and stop in Berlin, Cologne, Milan, Paris, Madrid, Stockholm, and Helsinki. A full schedule of tour dates and venues is listed below.

This marks The Rose’s second European tour in collaboration with MyMusicTaste, a global
online service where the fans request their favorite artists to their cities for a live performance. In order to meet the ever-growing demand of The Rose’s fans, the band partnered with MyMusicTaste to reunite with their eager fans from Europe.

The South Korean boy band is comprised of four members: Woosung, Dojoon, Hajoon, and
Jaehyeong. They made their debut in August 2017 with the single album Sorry, making an
unprecedented appearance in the K-Pop scene with their unique styling of British pop with a special Korean touch. The group’s first EP “Void” was released back in April and its lead single “Baby” debuted at #8 on the World Albums chart.

In addition to performing their hits, the band will be playing a number of new songs at Paint it Rose 2018 in Europe: 2nd Coloring as a special thank you gift for their European fans. 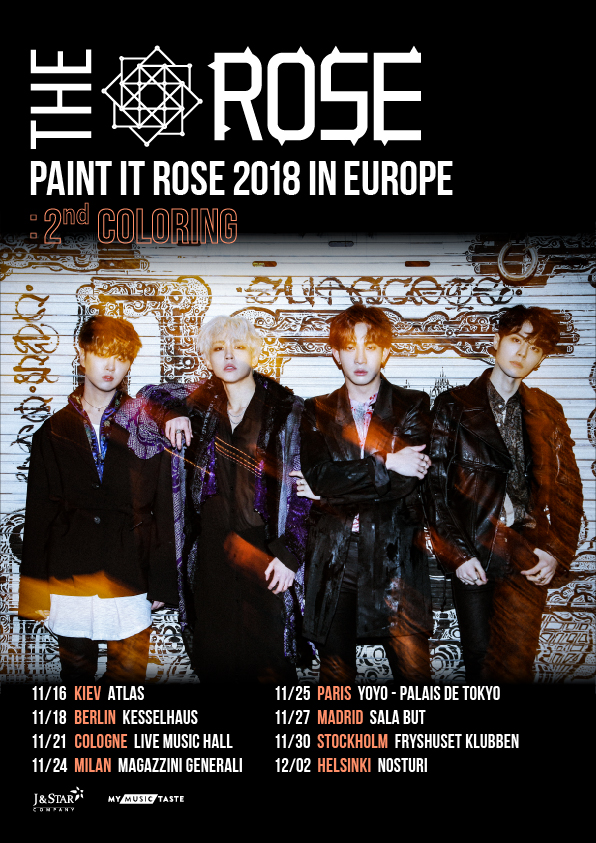 Further information on the tour and ticket purchase can be found through mymusictaste.com or other social media channels of MyMusicTaste.