The second part of We Got Married- the Super Junior addition was aired this Saturday and man was it worth the wait.

In the previous episode, Kyuhyun, Donghae, Eunhyuk and Sungmin were seen meeting their potential partners Son Eun Seo, Shin Soyool, Lee Sena, and Jung Yeonju for the first time. Both parties were very shy and watching the scene unfold was just so cute! In part two the preliminary couples go out on a bowling date and the winner of the bowling challenge even gets a kiss from his partner.

After the bowling date the parties were then given a dancing challenge where each of the participants were meant to show their charm via a dance. The girls showed a mixture of cute and strong performances whereas the boys showed equally strong performances. Who would expect less from Super Junior?

However, the couples were then asked to again choose the girls they would like to partner up with and with this came a massive twist. There seemed to be a change of heart during the course of the episode causing Donghae and EunHyuk to get involved in a difficult situation between Son Eun Seo and Lee Sena. Eunhyuk had first chosen Lee Sena as his first choice but then chose Donghae’s first choice Son Eun Seo.

The results of this situation resulted in Lee Sena to shed some genuine tearing shocking everyone around her! Eunhyuk who is the reason behind those tears is seen mouthing..’really?’ to Leeteuk and follows her straight away to console her. After all the couple had been chosen, the four couples were split into two groups, each group going on a double date at a local bowling alley to get to know each other better. 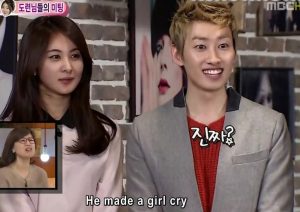 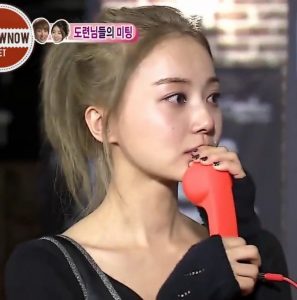 What do you think of Eunhyuk’s behaviour??

Leave your comments below and let us know what you think!

Girls Generation on their way to the US