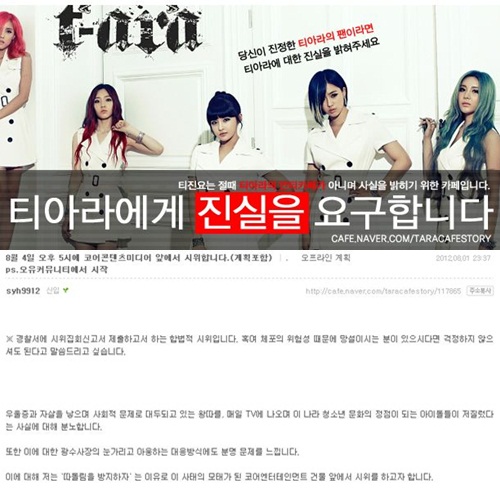 Having made quite an impact with protest’s organisation and gaining members day by day on its cafe`, T-jinyo, online cafe` with meaning “We demand the truth about T-ara,” has been been contacted by Core Content Media CEO Kim Kwang Soo for a meeting. Due to the condition of meeting, T-jinyo has just declined Kim Kwang Soo’s offer to meet.

Earlier today, the CEO requested a meeting with T-jinyo to clear up the allegations about T-ara members bullying Hwayoung, the former member of T-ara whose contract has recently been terminated by the CEO. The condition of the meeting was that it has to be private without media presence and the meeting attendance to be Kim Kwang Soo, three members of T-jinyo and two public-culture critics.

To explain the reason behind its decline to meeting, T-jinyo made a post titled, “We’ll let you know about the meeting between Core Contents Media and T-jinyo.”

The contents stated, “After speaking with the organizer of this meeting, we’ve decided that we will not meet with CCM. We feel that it would be faster to get the truth from the T-ara members themselves rather than Kim Kwang Soo.”

Through another notice regarding the upcoming protest, they further expressed their position stating,“If the representatives of T-Jinyo and Kim Kwang Soo were to meet, it would be an open meeting that is made public. T-Jinyo is not a simple anti-fan cafe, so we will not be appearing as a whole. Please send any questions concerning the protest to ‘Sajungyeon’ (social union) rather than to T-Jinyo. T-Jinyo is a cafe for public indignation, while Sajungyeon is a cafe for people who would like to take action.”

T-Jinyo will hold their protest on August 4 at 5PM KST in front of the Core Contents Media building.