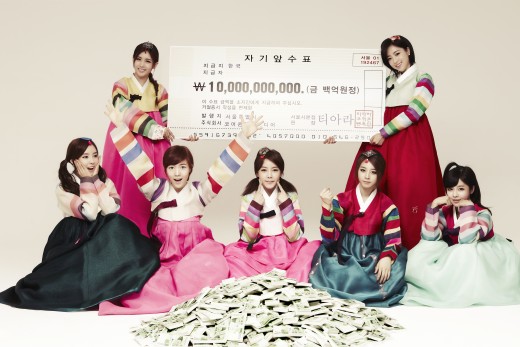 A second picture has been released by T-ara wishing fans a Happy Lunar New Year.

For this latest picture released on January 22, they wanted to give a unique pose that was different to other celebrity greeting pictures. The picture was taken in Hanbok at a Gangnam studio.

“Happy New Year and we wish all of you become rich!” was the caption for the second picture with T-ara holding a check for ten billion won.

T-ara said, “We prepared these greetings for the New Year to thank our fans, who loved, worried, and supported T-ara in 2011.” The bouquet of money, placard, and check were designed and created by T-ara members.

Currently T-ara are doing very well with their latest single “Lovey Dovey”, topping most online charts and appearing on a lot of TV music programs.