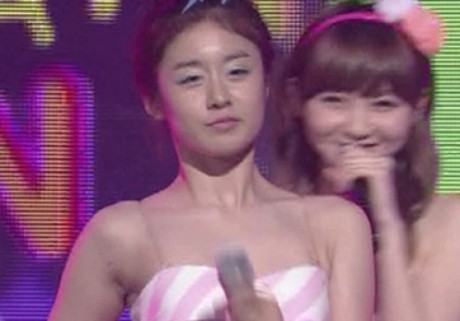 A series of previously unseen stills have surfaced online, uploaded by a netizen. The pictures show T-ara’s Jiyeon without her eyeliner on.

Uploaded on the 14th November under the thread title “Jiyeon performing without makeup”, the still dates back to the days when she was taking part in a project group alongside SeeYa’s Lee Boram and Kim Yeonji, and Davichi’s Kang Minkyung and Lee Haeri.

The stills from the show Jiyeon in a pink tube top with blue eyeshadow. For some reason, however, one immediately thinks she has no makeup on. On closer inspection, this is due to the fact that she is without her trademark eyeliner.

The stills have sparked many comments online, “Please use eyeliner when you go on stage”, and “I thought she had no makeup on, but then I saw the blue eyeshadow…”

Wonder Girls’ So Hee admits a preference to bad guys