0 0
[ad#GA-468-Tx-Runa] Earlier today, T-ara member Hyomin tweeted a picture of her hand written New Year letter to her fans. She tweeted the image and commented saying “It’s a New Year’s laundry letter..” She then tweeted again saying “Again again~ Hurry up and read it before it’s all dryㅜㅜ Can you still not see the letter??” 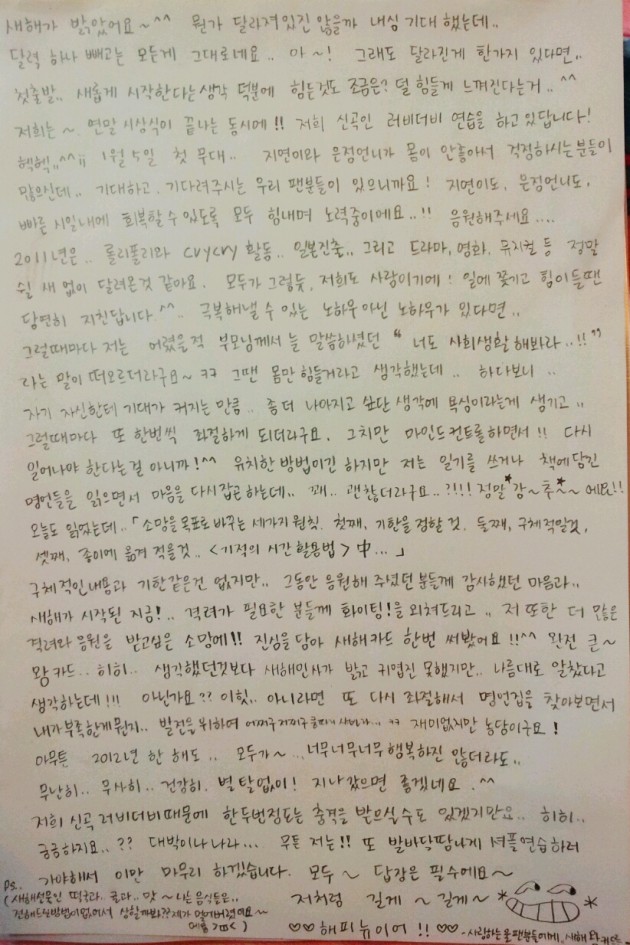 Translation:
The New Year has arrived~^^ I secretly had my hopes up for something different..
But everything remains the same except one thing, the calendar .. ah~! Though if there had to be one thing different..
A new start.. thinking about starting anew makes feeling tired feel a little? It feels a little less .. ^^
We ~ at the same time the year-end ceremonies came to an end!! We are practicing for our new song, Lovey Dovey!
Haek haek,,^^;; The first stage on January 5th.. There have been a lot of people worrying about Jiyeonnie and Eunjung unni because they haven’t been feeling well..
But because our fans have also been anticipating. and waiting for us ! Jiyeonnie, and Eunjung unni too,
Everyone is trying their best so that they will get better as soon as possible ..!! Please give us your support ….
In 2011 .. with Roly Poly and crycry promotions .. Japanese debut.. and dramas, movies, musicals, etc.
It really feels as if we’ve ran up to this point with no time to rest. Everyone must feel like that, we’re people too, you know!
Of course we get tired from working ^^.. If there’s a know-how, that isn’t exactly a know-how in means of overcoming this..
I think of what my parents always told me when I was younger “You try going out there in the real world..!!”
Those are the words that come to mind~ ㅋㅋ I used to think that only my body would be tired .. but after experiencing it ..
There’s more greed to become a little bit better.. as you set up high standards for yourself..
and there’s a feeling of frustration each time that happens. But with mind control!!
I know to rise up again each time!^^ It may be a childish method but I write in my diary or read famous sayings from books to encourage myself.. It’s actually.. a quite decent method..?!!! I seriously *re~commend*~~ it!!
I read it again today but.. 「The three principles of changing wishes into goals. First, setting a deadline, Second, specificity, Third, writing these on paper.. …」
Although I don’t have a set time limit or anything specific.. how thankful I’ve felt up until now to all the people who cheered for us..
And right now, the start of the new year!.. I want to shout out hwaiting! to the ones in need of words of encouragement .. And.. I also tried writing a New Year’s card filled with sincerity!! In hopes to receive even more words of encouragement and support from you all !!^^ A really big~
huge card.. hehe.. My New Year’s greeting didn’t turn out as bright and cute as I thought it would be but.. I think it’s meaningful in its own way!!!
Is it not?? Ehe.. if it isn’t then I’ll be discouraged again and I’ll go search for a compilation of famous sayings and think of what I’m lacking of.. in means to improve blahblahblah talking nonsense…ㅋㅋ It’s not funny but that was a joke!
Anyway I hope in 2012.. everyone~.. although it might not be a year of extreme happiness..
Easily.. safely.. with good health. Without any trouble! I hope the year passes by like that .^^
You might get shocked once or twice though with our new song Lovey Dovey.. hehe..
Aren’t you curious..?? Let’s get a daebak… Anyway I!! need to go back to practicing the shuffle dance to the point where my feet start sweating so I will end here. Everyone~ replies are a must~
Write long~ long~ like me
♡♡Happy New Year!!♡♡ –To our fans whom I love, a huge New Year’s card
PS..
( Rice-cake soup which was a New Year’s present.. tangerines and.. deli~cious food..
I have no way of delivering them to you in case they’ll spoil?? So I ate them all~~
Merong (T/N: sticking tongue out) )
(translation credit: en.korea.com)