Following the release of a mysterious teaser photo on SMTOWN’s official social media pages (Facebook, Twitter and Weibo) yesterday, the entertainment agency has revealed that its next solo artist is none other than Super Junior-M’s Zhoumi! 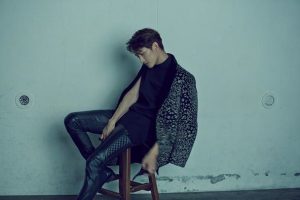 According to earlier sources, the 28-year-old Chinese member will be releasing his first mini album Rewind through online Korean and Chinese music site on Oct 31, and will be promoting in both countries as well.

Online netizens seem to be less than surprise about the star’s impending debut, especially following the debut of fellow SJ-M member Henry’s solo career. Fans are also expecting that Zhoumi will be taking part in the writing and composing of this album, since the star previously wrote several of the Chinese tracks for Super Junior-M’s past albums, and even penned the lyrics for the Chinese version of ‘Addiction’, by fellow labelmate Tasty (SM C&C).

Earlier this week, Zhoumi was also announced to be joining as an MC on season 4 of Korean music show ‘The Show’.