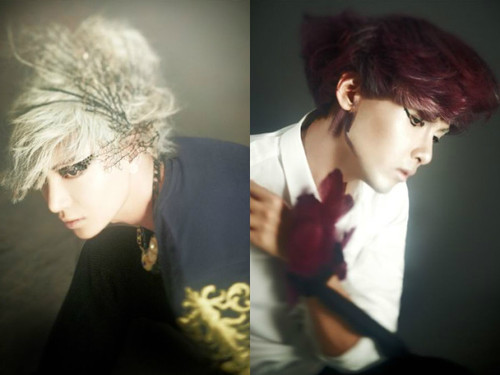 SM Entertainment surprised many Super Junior fans by releasing not one but two teaser photos. Recently the news of Super Junior’s comeback has been causing a lot of hype among the K-Pop community. Two other teasers were released before these of Eunhyuk and Donghae.

In the first picture we see Leeteuk having bleach-blonde hair with vines and intricate rhinestones around his eyes. In the second image, Ryeowook  is seen in semi-formal attire with red hair and various makeup markings on his face. They give a royal yet dreamy aura with their teasers.

Super Junior’s 6th album will be released online July 1st and offline July 4th. Their album will be sold on various sites including iTunes.
Keep up with kpopconcerts.com for the latest news!
[ad#GA-468-img-natmj]