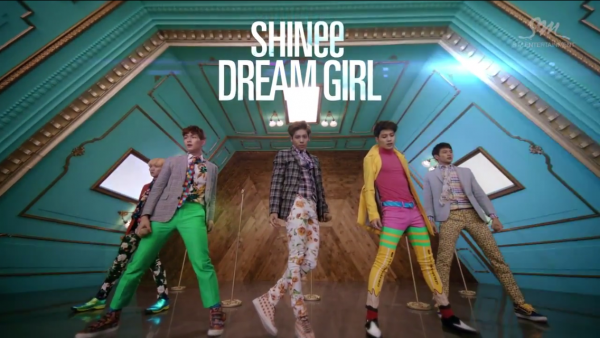 A little under a year since their last Korean promotions with “Sherlock”, SHINee is changing the game by showcasing new styles in their 3rd full-length album.

On February 19, SHINee’s much anticipated music video for their latest single “Dream Girl” was released.

The video was directed by DIGIPIDI, a duo known for their unique filming and directing styles. The video portrays SHINee as they struggle to find the girl they encountered in their dream. Through the use of pop colors and comical scenes, the boys successfully displayed the upbeat feel of the song.

Along with the release of the music video, the full dance version was released aswell! “Dream Girl” was choreographed by Tony Testa (also choreographed “Sherlock” and TVXQ’s “Catch Me”) who incorporated microphone stands into the routine.

Chapter 1 is now available for download on online music portals such as iTunes, Melon, etc.

Along with their Korean comeback, SHINee will also be returning to Japan with their upcoming single titled “Fire“, which is set to be released on March 13.

Check out the music video and dance version, below!

Rachel Yamagata Reveals She is a Fan of MC Sniper