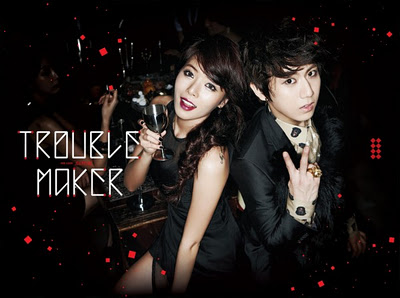 The title track, Trouble Maker, and the MV have been very popular since the release. Trouble Maker is an upbeat, charismatic duet with a catchy hook line and whistle intro that has been receiving much attention and love from many fans.

The music video’s concept seems to be a mix of love and betrayal and this is definitely an exciting combination. It isn’t the first time love and betrayal has been the story behind a music video, but I really enjoyed this version when compared to previous versions such as MBLAQ’s Y. I was immediately hooked even though the storyline was kind of confusing. The music video features a sexy, suave choreography as well and I think I speak on behalf of most K-pop dancers when say that I cannot wait to learn it. But I have to admit, I was slightly disappointed with Hyunseung’s dance break as it was pretty simple and I know that he’s capable of much more charismatic dance moves.

Track 2 is called The Words I Don’t Want to Hear (듣기 싫은 말) and it’s a lot slower and less energetic but a lot more soulful when compared to Trouble Maker. It has a very nice beat and harmonies throughout the song so it sounds more like an upbeat ballad. We can hear Hyuna’s vocals a lot more in this song as Hyunseung’s seem to be more dominant in the title track. Many people are wishing and hoping that the duo will perform this track as a follow up performance but only time will tell.

Track 3 is called Time and it features Radoo. It is similar to The Words I Don’t Want to Hear (듣기 싫은 말) with its slow pace and heavy beat. It is also a track which shows off the vocal styles of the two artists and their talents. Track 4, 아무렇 (Amurut) is a similar style so there isn’t anything new in it. But one thing I did notice was that only Hyunseung’s voice is present in this track, making it his solo track on the album. Not that I’m complaining :P

Netizens have generally had a positive opinion about this album with many comments such as “Hyunseung’s voice is AMAZING! I’m so glad he got to show it off a bit more with this album” and “Absolutely love this album from this fierce duo” but many people are still waiting for Hyuna to impress with live vocals. Some people didn’t have as positive a review as others with one netizen’s comment being “This actually disappointed me. A lot. It wasn’t great.”

In my opinion, the release was definitely worth waiting for and it’s an EP you should listen to if you haven’t yet done so. I’m really looking forward to the comeback performance and I’m sure it won’t disappoint. I have listened to this album countless times since its release. Being a 4Minute fan, I’m glad you can hear Hyuna’s soulful and powerful vocals a lot more in this album. She got a bit of bashing from netizens during past live performances for not being able to sing well, so I’m hoping this will prove them wrong.

What do you think of this album?