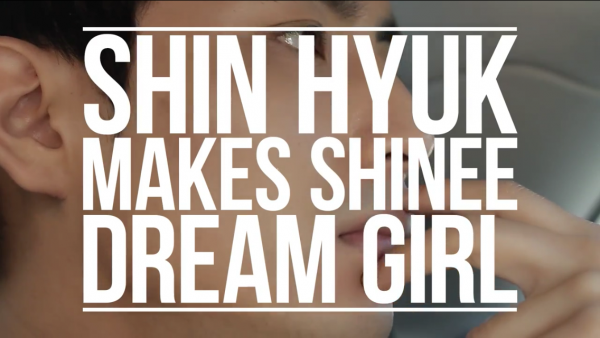 First, the video shows Hyuk Shin diligently working with his staff at Joombas Music Group as they try to create the instrumentals. Even during his ride to work, Hyuk Shin is seen working on the song in the back with a piano on his lap as he starts to think of the tune he’s going for.

After the instrumentals were set, Hyuk Shin went into the recording studio to work on making the English demo version. In most cases where songs are produced overseas, the producers would provide a Demo version of the song in English first, to give the intended artists an idea of how they should portray their voices once it is translated into Korean. In the video, fans can hear Hyuk Shin belt out his rendition of Jonghyun’s high notes heard on the official track.

Hyuk Shin is a notable producer for K-Pop artists and American artists alike. As for K-Pop, he has produced: SNSD’s ‘Romantic St.’, Teen Top’s ‘Supa Love’, Fiestar’s ‘We Don’t Stop’ and EXO’s ‘Angel’. It has also been reported that he had also worked on a song for EXO’s comeback. As for American artists, Hyuk Shin is most known for producing Justin Bieber’s ‘One Less Lonely Girl’.

Can’t wait to see what else Hyuk Shin and Joombas Music Group has in store! Check out the video below:

How Does Kim Bum Keep Himself Warm During the Outdoor Scenes of “That Winter, The Wind Blows?”