The ever increasingly popular Lee Min Ho proved once again the power of the K-Pop phenomenon as his eager Chinese fans over populated the fan greet, thus causing the event to be cancelled.

Lee Min Ho has increasingly become a household name China due to his performances and the broadcast of dramas such as ‘City Hunter’ and ‘Boys Over Flowers’ in China. One can admit being a fan of him instantly after having watched ‘City Hunter’ because of his strong character and his flawless role (even my Girlfriend is a huge admirer of him!).

Starhaus Entertainment, represented Min Ho, they stated, “On the afternoon of April 2nd, Lee Min Ho was scheduled to participate in the opening ceremony of the brand Semir in Xi’an, China. There were even some fans that waited from the day before to see him. Because of the countless number of fans, the event was cancelled due to safety concerns”.

The event organisers stated that “Although there were 100 coordinators and bodyguards, in addition to more than 300 local police officers, there were no other options. Lee Min Ho was only able to stay at the hotel and not go to the actual location, he was later forced to board the plane to return home”.

We eventually got in touch with Lee Min Ho and he commented, saying “I’m upset that I had to leave without even getting to see everyone. I promise there will be a next time”.

Being generous, he consoled fans by providing a signing session for 300 fans over two hours.

Below are some images of vast amount of fans that cancelled the event, as provided by Weibo. 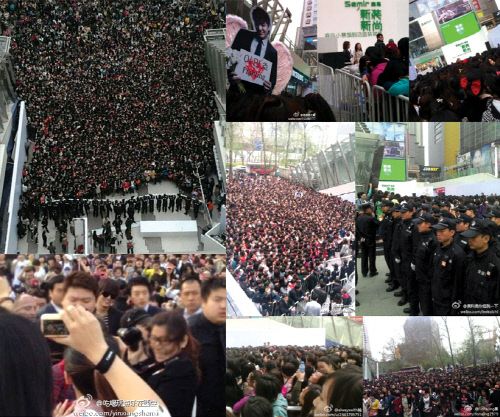