[ad#GA-468-tx-NT] Good news from two of the leading kpop groups, KARA and Teen Top as this week see’s a member from each group graduating from high school.

On February 7th, Teen Top’s Chunji, took time out of his busy schedule with his group promoting, “Going Crazy”, to attend his own graduation at the Seoul Gangseo-gu Community Health Center

At the moment there is speculation that Chunji was specially admitted to Hanyang University’s applied music program,, where the course it due to being later this year. 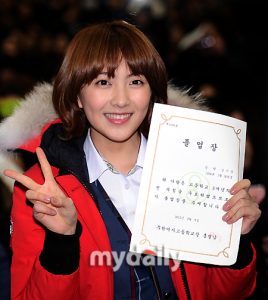 [ad#GA-468-tx-NT] KARA’s Jiyoung (now 18) will considered an ‘adult’ officially as she attended her graduation at Muhak Girls’ High School. Even though Jiyoung has been busy with KARA promoting in Japan and Korea, she made time to say farewell to classmates and teachers.

Jiyoung also updated fans on Twitter before graudation saying, “I debuted when I was a freshman in high school, but I’m already a senior, graduating tomorrow. Will I be able to be a mature, successful adult?”

Other kpop celebs in the same year group that have or will be graduating in 2012 include: INFINITE’s Sungjong, Girl’s Day’s Minah, IU, SISTAR’s Dasom, T-ara’s Jiyeon and Hwayoung, 5dolls’ Hyoyoung, KARA’s Kang Ji Young, SHINee’s Taemin, and B1A4’s Gongchan.