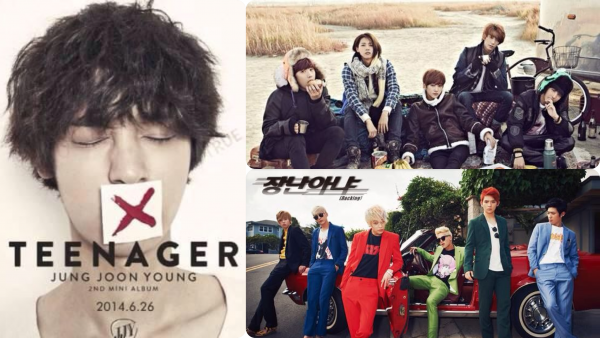 Solo artist Jung Joon Young kicked off his career after placing in the Top 3 on Superstar K4 in 2012 and officially debuted the following year with “Spotless Mind.”  Joon Young has just made his comeback yesterday with the release of his second mini-album, TEENAGER. KCON attendees will be blown away by the rocker’s powerful performance.

Idol group B1A4 was in high demand for this year’s KCON.  The group debuted back in 2011 with “O.K.” and has since released numerous hit singles such as “Beautiful Target,” “Lonely,” “This Is Over”, and many others.  B1A4’s anticipated comeback is scheduled for July and KCON attendees will be one of the first to hear the group’s latest track!

Fellow idol group Teen Top will be returning to the KCON stage after last year’s remarkable performance.  KCON 2013 attendees were left in awe as they were the first to hear Teen Top’s killer track “Rocking” and the first to see the boys perform the fast-paced choreography.

The three performers will be joining the already-phenomenal KCON 2014 lineup consisting of Girls’ Generation, BTS, CNBLUE, IU, and VIXX. The full artist lineup will be revealed prior to the ticket sales.