For a lot of London Kpop and Korean food fans Seoul Bakery is not only known for its delicious cheap food, quirky décor and Kpop music but it is also where Kpop idols such as 2NE1, SHINee, Superjunior’s Siwon and Norazo have also dined. 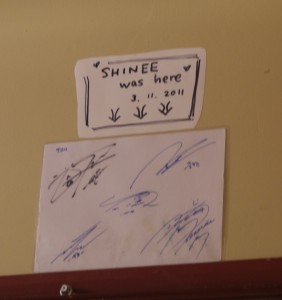 Kpop fans are always seen hanging out in Seoul Bakery and now the owner HoHo Son, with help from a London Kpop fan and friends has now opened a one day a week Kpop merchandise store called ‘HoHo’s Kpop Store’.

The store will be open every sunday from 4pm to 8pm. Ho Ho regularly goes to Korea to buy stock and almost anything can also be pre-ordered. They not only sell albums but posters, cards, towels, wallets, phone cases, dvds and lots more. 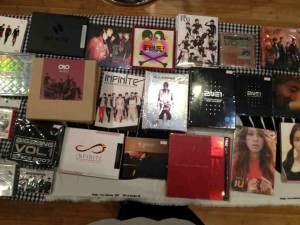 The front of store is mostly run by Kpop fans who are close friends of the owner which makes the atmosphere really relaxed and fun. There are also free Korean snacks available and of corse, Kpop music being played.

As this is the first Kpop merchandise store in London we know of, It seems the ‘Hallyu wave’ is expanding quickly in the U.K. Also Kpop fans are already really excited to be able to buy product without having to pay ridiculous over seas shipping fees.

The store is located down stairs of Seoul Bakery and the address is:

The store also has an offical Facebook page for any other enquiries or requests.

The store only opened a few weeks ago but KpopConcerts was there on the first opening day to check it out. Take a look at our quick clip below of what HoHo’s Kpop shop had to offer..