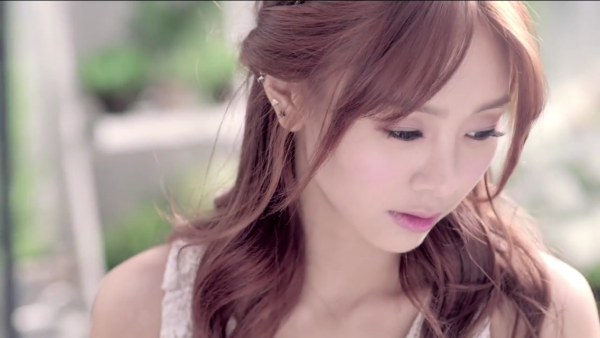 G.NA follows up her sexy concept in “Oops” with a mature and elegant concept for “Mind Sync“.

In the music video, G.NA is sporting an elegant white dress as she wanders around her garden and reminisces on all the good times she had with her ex-boyfriend. The ex-boyfriend, in turn, is seen in his kitchen also reminiscing about his times with relationship with G.NA.

G.NA teamed up with fellow label mate, Huh Gak, for the ballad that portrays former lovers’ lingering feelings for one another. Although it’s implied the couple had broken up a while ago, the lyrics reveal that they still still hold feelings for one another, if given the chance, they would give their relationship another shot. Although Huh Gak does not appear in the music video, his and G.NA‘s voice perfectly express the bittersweet emotions of the ballad. With their powerful and sweet vocals, G.NA and Huh Gak are sure to melt people’s hearts.

“Mind Sync“, along with “Oops“, is off G.NA’s latest mini album, Beautiful Kisses. The album is currently available for download on iTunes and other music-sharing sites.

Super Junior's Yesung Will Enlist for National Service in May