Pre-debut: JiYong was born and raised in Seoul. He began his career when he was eight as part of the group ‘Little Roora’. The group were only able to release a Christmas album before having their contract terminated by the record company. JiYong swore that he would never become a singer again to his mother. GD then trained at SM Entertainment for 5 years, he was scouted by SM whilst on a ski trip. GD was introduced to an American group ‘Wu-Tang Clan’, he was inspired by their music and began taking rap classes at the age of 12, he also joined the release of Korean hip hip Flex album in 2001. He wrote his own lyrics for the song, he admitted that his “English was bad and the story behind the lyrics was the same old thing’  along the lines of, ‘I’m young, but I’m the best’ He specialised in dance, at SM Entertainment as he had not decided what he wanted to do, before leaving the company.

Sean of YG’s Jinusean first noticed JiYong when he was 14, who later recommended him to CEO HyunSuk Yang. After joining YG entertainment GD spent the first year as a runner before meeting trainee YoungBae Dong (TaeYang). The two were put together as GDYB, training together and appearing on several artists tracks and music videos. In 2006, Gdragon made his debut as leader of Big Bang. with TaeYang, TOP, DaeSung and SeungRi. 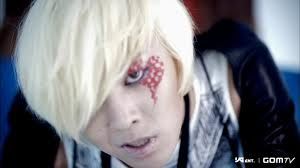 Solo Activities: GD’s  first solo album ‘Heartbreaker’ was released on the 18th august 2009 (his birthday). Other than the album being amazing there are a few reasons why Kwon JiYong received attention on this album. Firstly, He was one of the first idols to go bleach blond. Theres also the checkered red heart on his face, which many fans tried to copy.

There’s also the apples, which are symbolic of hearts, and is how the term ‘applers’ came about. Although ‘Applers’ isn’t an official fan base, fans still use this. Heartbreaker was one of the first Kpop songs to use so much autotune, although it was done for an electronic feel. Many thought that GD would be unable to perform it live, but he proved them wrong with strong performances at his concert ‘Shine a light’.

He was almost prosecuted for his intimate performance with Amy Lee at his ‘Shine A Light’ Concert during Breathe, as people as young as 12 were present. According to investigators in 2011, G-Dragon had smoked marijuana sometime in the middle of May, and had taken a drug test in July. The initial urine test came back negative, however futher tests caused uncertainty.GD confessed at the time that he had been taking the drug at a Japanese club whilst visiting Japan for a concert. “I smoked a cigarette that someone had given me at a club,” G-Dragon said. “The smell was somewhat different from that of a regular cigarette so I was slightly suspicious that it was marijuana, but it is true that I smoked it,”Since the amount of marijuana was so small and G-Dragon had no prior offences, they decided to give him a warning.


GD received a lot of attention for his 1st mini album “One Of A Kind”, with each song on the album having a unique feel to it. GD is said to have worked on this album even whilst BIGBANG’s Alive Galaxy Tour. In addition to this G-Dragon is set to release another album and will go on a 2013 solo world tour.

Miscellaneous: GD has a pet dog ‘Gaho’, who is known for his ‘wrinkles’ and cuteness. Gaho was even in G-Dragon’s breathe music video, and in several other programs such as 2ne1 TV.
G-Dragon is often referred to as the “Fashionista” of K-pop, in 2012 GD even wore several weaves. JiYong models for G Market and Beanpoles. Here are the recent CFs.

BIGBANG to have a comeback in 2012