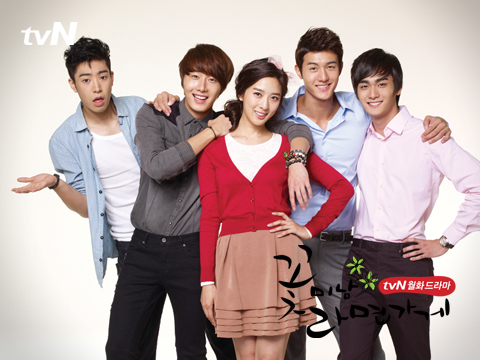 This Drama tells the story of Yang EunBi (Lee Chung Ah) an ex volleyball player preparing for her civil service exam to become a teacher and Cha ChiSoo, (Jung Il Woo) the arrogant son of one of the rich’s business men in Korea who strangely falls in love with Yang EunBi without realising it. They both end up working in a ramen shop  for the lazy Choi Kang Hyuk, (Lee Ki Woo) who takes over the ramen shop after EunBi’s father passes away. The drama deals with the ‘Flower Boys’ who live with EunBi and work at the Ramen Shop.

This was definitely one of the most talked about Dramas when it aired in regards to the actors and the storyline itself and was certainly one of my favourites from 2011. It’s an upbeat drama, filled with brilliant OST songs and entertaining anime like humour which will keep you smiling, if not laughing throughout.

As the drama unfolds you find yourself emotionally invested in the characters as they reveal refreshing new sides of themselves. The characters in the drama are so endearing and their interactions with each other are just so funny. You can easily tell that the cast had very good chemistry with one another which paid of tremendously on screen.

If I had to choose a word to describe this drama with I would say ‘addictive’. From EunBi’s too tempered, old fashioned character, Kang Hyuk’s total ‘flower boy’ looks and deep care for EunBi, ChiSoo’s naive and bratty personality, the other flower boys adding fun and laughter to the storyline and not to forget the love triangle that develops half way through the drama..It was all just so good!! I thoroughly enjoyed this drama and like any fan girl was totally left wanting another season at the end!!