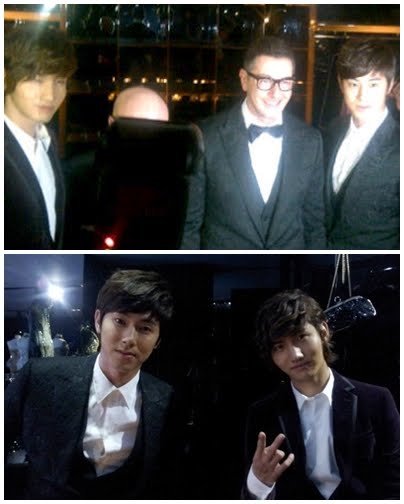 2 photos were uploaded on November 9 at around 1pm on various online communities showing TVXQ with the world famous designers with the post titled “Dolce & Gabbana and TVXQ”.

The published photo shows Yunho and Changmin with Domenico Dolce and Stefano Gabbana flanking TVXQ. What was even more attractive was they were all wearing white shirts and black jackets but still managed to catch stares even while their standard suits styles.

During the afternoon of November 8 a party was held with Dolce & Gabbana’s presidents-cum-designers at a Dolce & Gabbana outlet situated in Chungdam-dong. Other than TVXQ, actresses Kim Sun Ah and Kim Sarang etc also graced this party, as well as the main guests Domenico Dolce and Stefano Gabbana.

Netizens who saw the photos showed a variety of responses, “It’s a pity that Mr Dolce’s face didn’t appear in the photo”, “Looking at such photos, one will inevitably say “suits craft”, isn’t it”, “It seems that suits should no doubt be the combination of white shirts and black jackets.”

What a Psychologist says about Fangirls