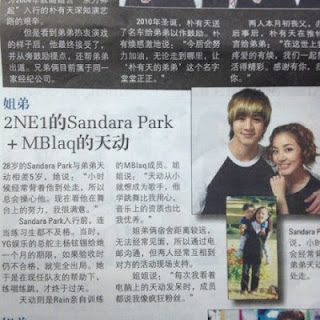 2NE1′s Sandara Park + MBLAQ’s Thunder
28-year old Sandara Park and her younger brother have an age gap of 6 years(although the article said 5 years). Dara said, “I used to piggyback him everywhere when we were younger, so I’m always worried about him. But now looking at him putting effort performing on stage, I’m very satisfied.”

Before Sandara Park’s debut, she wasn’t even qualified to be a trainee. During that time, YG’s CEO Yang Hyun Seok gave her a month’s time to train. If she failed to improve, she will be kicked out. Hence she trained her vocal and dance skill with her current members and managed to remain as a trainee. (Actually, YG thought that Dara wouldn’t make it as a 2ne1 member at first, so he told her to become a YG actress instead. Dara wanted to prove herself so she trained really hard with the help of the other 2ne1 members for one month. She worked hard to become a member of 2NE1 and not to remain as a trainee.)

Thunder, on the other hand, was personally trained by Rain himself with the other MBLAQ members. Dara said, “Thunder had always wanted to become a singer since he was young. He was more hardworking than me during dance practices, and he had better musical talents than me.”

Due to the distance of the siblings’ dorm, they couldn’t meet up often and used email to stay in contact. However, they would still show up on each other’s event to show support.
Dara said, “Every time I stare at the computer screen while Thunder is performing, my members would say I look like a crazy fan.”

London to become the 'K-pop Hub' of Europe?