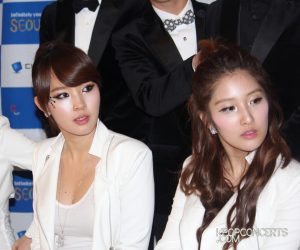 Cube Entertainment released its list of official fan sites from 24 countries around the world.

46 global websites that they considered to be official fan sites were named by Cube from countries such as France, Spain, US, Russia, Philippines, Brazil, and more. But oddly enough UK fan sites were not on the list.

The breakdown of fan sites per artist is 4minute with 15 global sites, B2ST will have 21 and G.NA will open 10.

Cube Entertainment review over 150 different fan sites in January. Officials are said to have gone over reports submitted by the sites regarding member activity and future management plans.

Cube Entertainment plans to use the sites to help promote their artists to the global market whilst trying to build up a relationship with the international audience.

There have been no official reports as to why the UK was omitted from this list. This is the second blow that UK Cube Entertainment fans have been dealt after the B2ST tour announced that it would not be coming to the UK.

Do you think some UK sites should have been on the list?

Miss A: On the set of their new music video