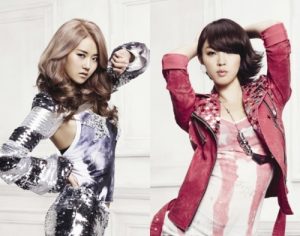 Following the recent debut of sub-unit Trouble Maker, made of 4Minute’s HyunA and BEAST’s Hyunseung, CUBE Entertainment have made an official announcement regarding the 2nd sub-unit composed of 4Minute’s Gayoon and Jiyoon. The duo have so far been named ‘Double Yoon’ as they have yet to conjure up an official name.

CUBE Entertainment representatives revealed that the sub-unit would make their debut next year, after the release of 4Minute’s comeback and their promotions.

Gayoon is 4Minute’s main vocalist, being capable of exhibiting an amazing vocal range. She has also contributed to the OSTs of dramas such as MBC’s ‘My Princess’, SBS’ ‘Lie To Me’, and KBS’ ‘Poseidon’.

Jiyoon is 4Minute’s lead vocalist and sub-rapper, known for her charismatic vocals on stage, but also being able to express some adorable aegyo offstage.

4Minute have recently completed, along with fellow label mates BEAST and G.NA, a world-wide live concert tour of UNITED CUBE, which included Seoul (South Korea), Tokyo (Japan), London (United Kingdom) and São Paulo (Brazil). It was in London where ‘Double Yoon’ made their first performance, covering Ke$ha’s ‘Blow’, and received positive feedback from the audience.