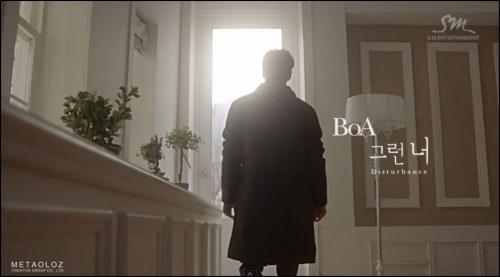 ‘Disturbance’ was relased through numerous music portals on January 28th. The song is a soft R&B ballad that portrays the pain of a crumbling relationship and the loss of one’s significant other.

The song and music video share few similarities with BoA’s previous single, ‘Only One’ – both songs were composed and written by BoA while her older brother Soon Wook directed both music videos. ‘Disturbance’ was filmed in early January and was first shown at BoA’s solo concert, ‘BoA Special Live 2013 ~Here I Am~’ on January 26.

SHINee’s Taemin was also featured in the music video as BoA’s boyfriend. The maknae showcased his acting skills as he shows love and affection towards BoA in the flashbacks, but bursts into tears and punches a wall out of frustration at their current situation. Taemin’s skinship with BoA and overall acting in the video had shocked many fans.

The music video for ‘Disturbance’ also gives the viewer two alternative endings to view – ‘Let Time Go By’ where BoA is seen giving walking away from Taemin and their relationship and ‘Go Back to the Past’ where Taemin returns to the day he first confesses to BoA.

Taemin’s casting in the music video was brought up in BoA’s solo concert press conference. According to the translation, “[BoA’s] schedule was tight and the time given to shoot the new MV is limited . People around her recommended Taemin . BoA said that Taemin ‘s pure and innocent image fits and she is very grateful to Taemin . MV turned out sweeter and more romantic than she expected and people might be jealous of her.”