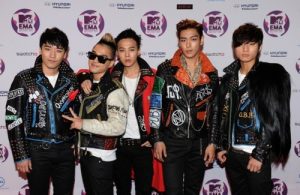 After winning the Asia/Pacific catagory of the EMAs, the boys were moved up to the ‘Worldwide’ category, going against Worldwide acts: Lena, Britney Spears, Abdelfattah Grini, and Restart.

When accepting the award GD spoke in Korean, while TaeYang spoke in English. You can view the transcript here:

“Woah, it’s amazing! Thank you so much! We are called BigBang from South Korea! It’s nice to see you and this award is all the more valuable because it’s a present that you, fans, gave us. Thank you VIPs! Please take interest in Korean Music and BigBang even more from now” – G-Dragon

“This is only because of our fans,  through the ups and downs thank you for standing by us, thank you MTV!” – TaeYang

“Shout out to YG family, Thank you MTV, we love you” – G-Dragon

“BIGBANG” –  G-Dragon & Taeyang
BIGBANG really wanted to thank V.I.Ps for all their continous support!  VIPs broke the record of most votes, having a total of 58 Million!

Unfortunately, BIGBANG did not perform but at least they won their award and hopefully the Hallyu Wave will now continue to grow!

Not only did BIGBANG win, they were also top in mentioned tweets,  above popular western acts including Lady GaGa, Paramore, Rihanna and Bruno Mars. 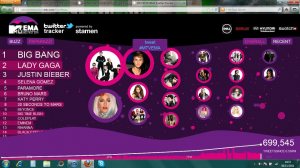 Check out some of the Screen shots of them accepting the award:

Below is the video of BIGBANG accepting the award! Please subscribe for more news to come!