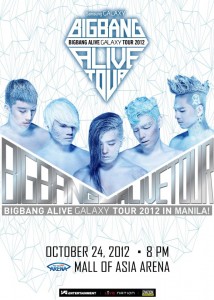 After rocking Singapore, Bangkok, Jakarta and Taipei, Bigbang finally hit the Philippines. On October 22, welcomed by a huge amount of fans, BigBang arrived Ninoy Aquino International Airport for the concert tour. Since the boys arrived almost 2 days earlier for the concert, they spent their free time swimming and dining out with no other than 2NE1’s Dara.

Well, just as expected, the boys rocked the Mall of Asia Arena with their hits from their albums Alive, Still Alive, GD’s One of a Kind and many others. Taeyang danced and sang in every side of the stage, and of course the stripping was the highlight! Daesung looked really sexy banging his head and whipping his hair. Seungri was especially cute and handsome that night. On the other hand, GD as the usual, impressed the VIPs with his fashion and style. TOP killed the VIPs with his overflowing charisma and surprisingly danced solo during the encore stage.

The Filipino VIPs surely enjoyed the party and definitely wants more. To that note, Bigbang promised the VIPs that they will be back in Manila.

Here are some of the captures from the concert.

From the Philippines, BigBang will make their way to Kuala Lumpur, Malaysia as the next stop for the Alive Galaxy Tour which will be held on October 27, 2012.