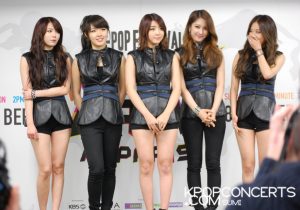 4minute has been scheduled for a comeback in April after being pushed back since January this year. The group have on a hiatus since the release of “4MINUTES LEFT,” in April last year.

Cube Entertainment say that 4minute are trying to get through all their songs, mastering the vocals and performances.

4minute have already chosen the track from their new album to make their comeback with.

CEO of Cube Entertainment posted on his twitter on March 20, “On my way to the filming of 4minute’s MV. Enjoy dinner.” Sohyun from 4minute then retweeted the post and added, “That’s right^^ Filming 4minute’s MV right now♥”

SHINee will make you broke with five different album covers for ‘Sherlock’!