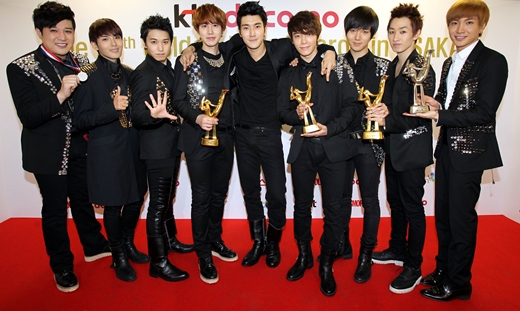 Despite a small controversy over this year’s award ceremony being held outside Korea for the first time, the 26th Golden Disk Awards in Osaka, Japan, have produced a very satisfying outcome, especially for k-pop superstars, Super Junior.

The 13 member boy group swiped a phenomenal 4 Golden awards, including the top category of Disk Daesang (a.k.a Record of the Year) for their 5th album, Mr Simple. This leaves them with the title of ‘Most Awards Won’, with 13 awards over their 6 year career.

Along with a grateful tweet from the whole band which thanked their fanclub ELF for their continued support, member Sungmin updated his blog on naver.com after the ceremony; I am really, really…so happy today~
I hope that we can repay you for these awards that you have given us, in the future
I will try much harder!! >

They were joined in victory by f(x), Infinite, MBLAQ, Jay Park, CN Blue, and BEAST as Disk Bonsang (Main Award), and also came top in the first day’s Popularity Award. Their final win was the MSN Japan Award, a new category for this year.

There was also great reason to celebrate for entertainment company Cube, as alongside BEAST’s Disk Bonsang, they gained the CéCi Award, for popularity in the Korean magazine of the same name. The company’s producer, Hong Seung Sung, successfully collected the Golden Disk Producer’s Award for the second year running.

As Day 2 of the GDA’s quickly approaches, it remains to be seen which other talents will be rewarded for their achievements in the music industry.
The Golden Disk Awards 2nd Day will be broadcast on 12th January on channel JTBC at 18:30PM KST, involving acts such as FT Island, BOYFRIEND, Huh Gak, and Girl’s Generation, who are nominated in 3 categories. The most anticipated event of the second day will be the Digital Daesang category, for Digital Record of the Year.

Do you agree with today’s winners? Who would you like to see win a Golden Disk?

Donghae tweets Thanks to ELF