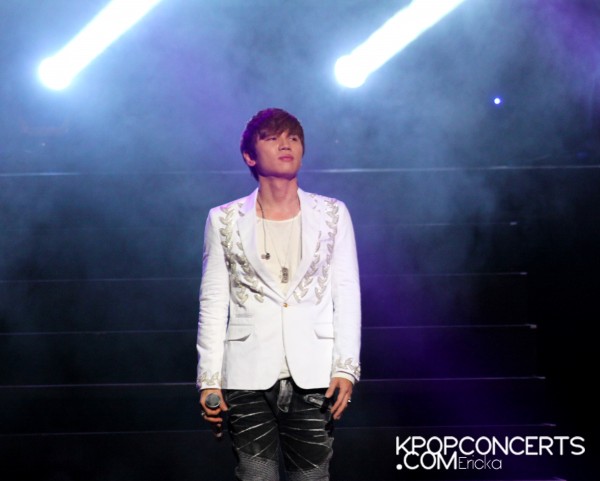 Regardless of the fact that it was on a Thursday night, hundreds of fans of all ages attended the concert. From little kids to the elderly, K.Will’s voice had made an impact on all generations. As soon as K.Will stepped on the stage, he was greeted with a roar of cheers from the crowd, to which he gratefully acknowledged. His powerful and moving voice had the fans singing along in unison, even reaching a point where K.Will would suddenly stop singing to listen to the fans’ voices. Whenever he would take a break to drink some water, fan-girl screams would erupt much to his amusement that he took several more gulps to tease the fans even more.

K.Will delivered an outstanding performance as he sang several of his hit singles such as: “I Need You,” “Please Don’t,” “Butterfly,” Love 119,” “My Heart Beating,” and many more. Along with his hit singles, K.Will performed two of the most popular songs in K-Pop today – Big Bang’s “Fantastic Baby” to which the fans made even louder screams, and followed by PSY’s “Gangnam Style.” By this time everyone was on their feet doing PSY’s signature dance.

During one of the talk segments, K.Will called out a man in the crowd. Apparently this man had previously made known to K.Will that he will be proposing to his girlfriend at the concert. Due to technical problems and the girlfriend’s shyness, K.Will walked down the stage towards the man’s girlfriend, sat on the arm rest (much to the envy of the female fans in the audience) and interviewed her. Then the proposal happened, and she accepted. Needless to say, roar of screams and cheers of “Kiss! Kiss! Kiss!” erupted in the entire theatre.

Although the 2-2.5 hour concert went fairly quickly, many fans will remember this Valentine’s Day for years to come.

Check out some of Kpopconcerts’ exclusive photos from the show, below!

Written and photographed by: Ericka P.