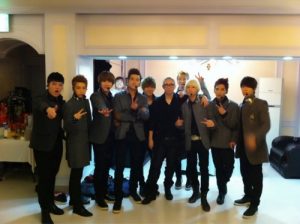 For many ELFs, November 19th and November 20th was a huge day of celebration. Tumblrs and facebook users, everywhere, flooded their pages with pictures of this glorious event! Even Henry and Zhoumi participated many times and had their own solos. Super Junior dressed up as many characters such as Yesung being Chuckie, Donghae being Charlie Chaplin, Sungmin as Marilyn Monroe and even Kyuhyun as Steve Jobs. It was, by far, one of Super Junior’s most successful concerts having fans coming from all over the world.

This concert has other ELFs on the edge of their seats, begging SM Entertainment to bring this opportunity to their concert. SM Entertainment has promised to reveal Super Show 4 concert dates and countries tomorrow; let us hope they’ve kept their promises about coming to Europe and America.

If you wish to get a glimpse of this stupendous event, check out some fancams below!

Super Junior’s Donghae with a goatee