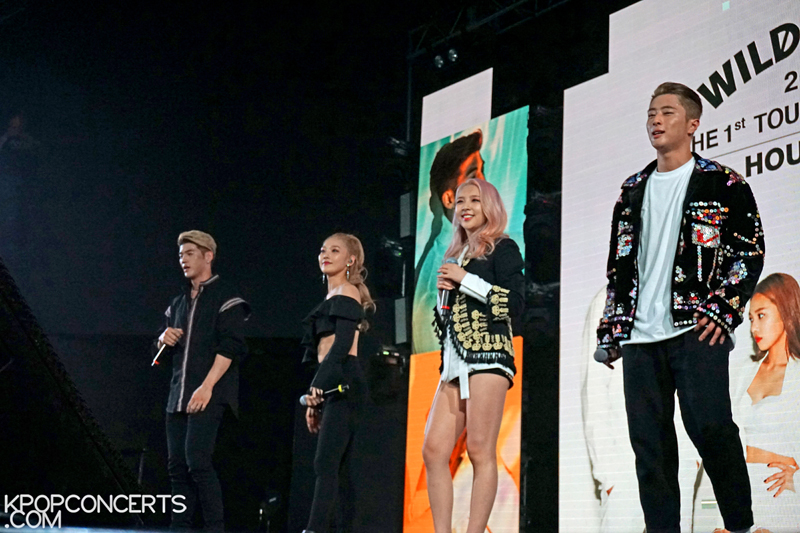 Have you ever heard of a K-Pop group with three officially released, charted songs to their name and haven’t even debuted?  Meet KARD, 4-membered K-Pop group fresh on the scene with their high-energy dance bops.  It’s quite unconventional, but then again, KARD has never been one for convention.

Korean groups have always been heavily dominated by groups of just one gender.  In rare maybe even fresher moments, there are a few co-ed groups that sprung up through the history of the genre.  We first had old-school perennial summer-time favorite group Cool, then Koyote (where Kim Jong Min of XMan and 1 Night 2 Days variety show fame originated from), to more modern sound groups like 8eight, Clazziquai, and Urban Zakapa. Co-ed groups have proven time and time again to enjoy massive success not just among K-Pop fans but among the Korean general population as well.  As the only idol group currently active, KARD hopes to distinguish themselves from the rest of the idol groups in the industry and rightly so.  Because of their unique group formation, KARD has the advantage of taking on different concepts, music genres, and performance techniques compared to single-gendered groups.  Since debut, KARD has enjoyed unprecedented success abroad for a rookie group not even officially debuted.  Much of this popularity has been accredited to the right appeal of the electro-pop music to international audiences.  And such a unique combination has brought about their 1st tour in America, in which Kpopconcerts.com had the opportunity to cover. 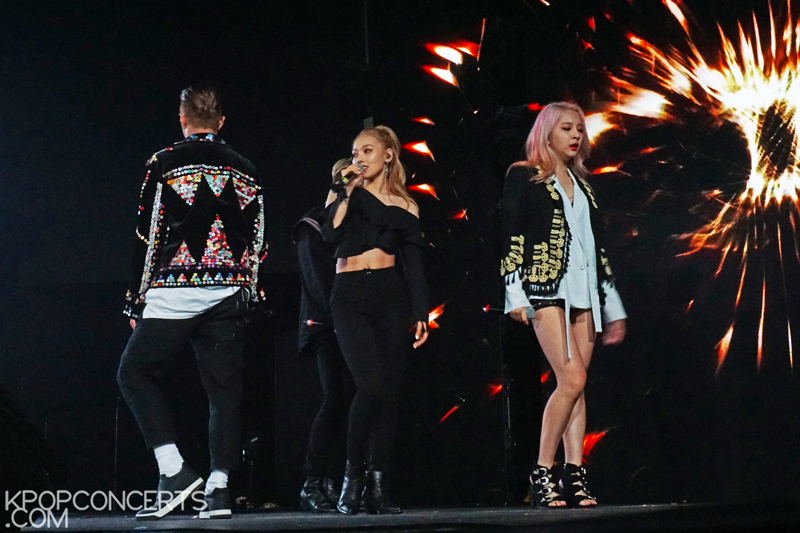 With tour stops in Chicago and Los Angeles, Kpopconcerts.com caught KARD at their Houston leg held in Stereo Live, a venue traditionally held for EDM acts.  Although the venue is not familiar to K-Pop, it nonetheless provided an intimate setting for eager fans who have been waiting in line since 10AM to meet the members.  As fans poured into the venue, excitement and anticipation was thick in the air.  The show promptly launched off shortly after 7PM, with opening song “Rumor,” a moombahton song with lyrics of spiteful ex-lovers wanting to get back together.  Next, fans were treated to the English version of “Don’t Recall.”  With a mellow tropical house sound, the song’s highlight lies in its lush synth melodies coupled with angsty post-break up lyrics.  As a closing act, it was the song that propelled them into the limelight with KARD’s trademark hybrid sound of hip-hop and synth pop “Oh Na Na.”  It’s not hard to see the appeal with its addicting hook and fresh dance concepts. 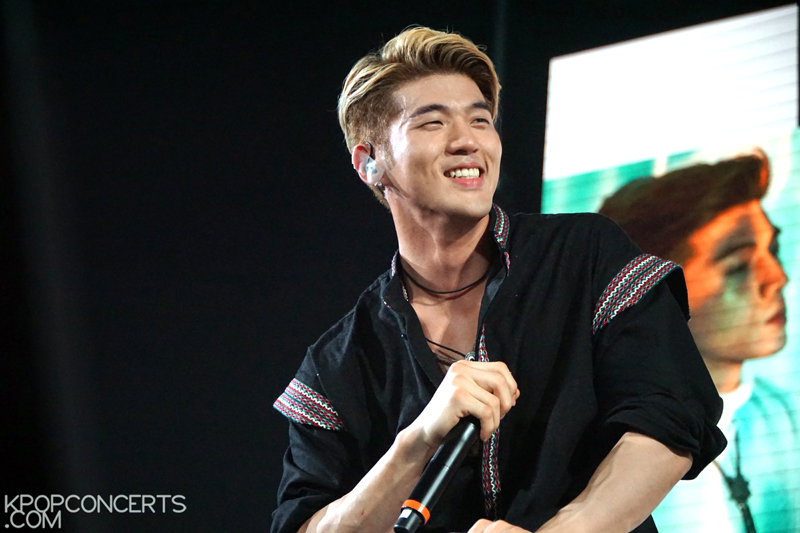 Perhaps what fans were even more anticipating aside from seeing the songs live was the Q&A.  The members introduced themselves one after another, with BM not holding back his enthusiasm to use his native English to greet fans.  Members took turn drawing questions from a box filled with questions from the fans.  The first question drawn by member J.Seph was if they had tried Chicago deep-dish pizza and how was it.  J.Seph said that he was surprised by how thick the pizza was and while eating it, the pizza was quite sweet but it was still good.  Here in Houston, Texas, the members had some Texas BBQ. J.Seph thought it was like eating cotton candy, while member Jiwoo admitted it was her first time eating the BBQ and would love to try it again.  Sadly enough both members Somin and BM confessed that they really wanted to eat more but didn’t because of their ongoing diets. 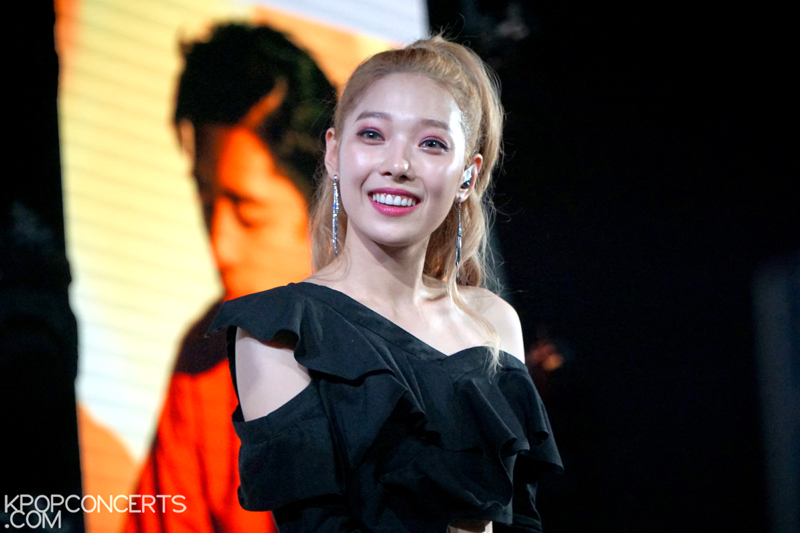 When asked what would they have been if not members of KARD, Jiwoo said that while she really wouldn’t think of anything else but a singer, she does have a strong interest in fashion so perhaps something involved in that area. Many people thought that J.Seph could have worked as a model, but the member very strongly denied it and hesitantly said in English that he would have been in the army. BM shared with the audience that he was actually studying Psychology before he entered the trainee life so he could see himself helping people with anxiety disorders. Somin would have been involved in classical music. Another interesting fact shared to the fans during the Q&A segment was the members’ hidden talents. BM alluded once again to his psychology background, while Somin and Ji Woo both said they could play instruments. J.Seph kept things fun by proudly revealing that he could dribble a soccer ball 200 times. Fans definitely ‘ooh’ and ‘ahh’-ed over that one. 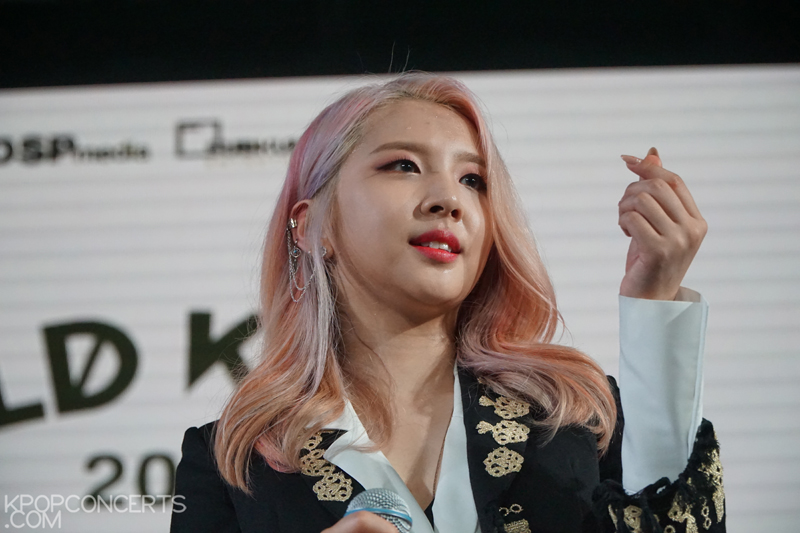 The night’s program alternated between performance sets and interaction sets. The members showcased their skills and acknowledged their audience with covers of current American pop songs. Member Jiwoo shined with her rap rendition of Nicki Minaj’s part in the song “Side to Side” while fans enjoyed the group’s signature couple dancing. Fans were treated with quite an interactive segment where six lucky fans were selected to be onstage to win prizes from signed albums to Polaroids of the members. One lucky fan of BM was serenaded by the member himself to use as a morning alarm call. And as a variation of random dance play corner, the members participated in a random dance speed play segment where not only the songs are randomly selected but the tempo of the song as well! Hours of blood, sweat, tears of practice and hard work paid off when members barely made mistakes throughout the segment. However, a victim had to be selected for the sexy dance punishment and thus, member BM was singled out. Without further ado, he quite unabashedly revealed his abs to cheering fans. 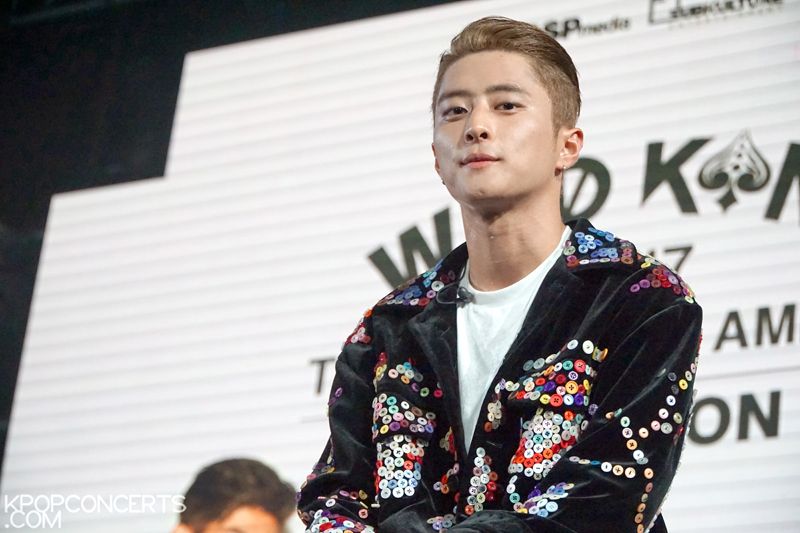 If Houston was any indications of what was in store for KARD, the group is here to stay with its staunch support from international fans. Providing slick hybrid songs of hip-hop and synth pop, the group has never doubted its strength in providing fans with the trendiest music. Armed with charming personalities and a native-LA speaker, the group aims to grow globally and locally as they look forward to their own official debut in Korea. KARD lacks nothing in well-oiled music production, dance prowess, and engaging personalities, and Kpopconcerts.com is grateful to be a part of their rookie start on their “WILD KARD” 2017 The 1st Tour in America.

Special thanks to SubKulture Entertainment for having us!