For five years and counting, KCON 2018 LA has brought the hottest acts in K-Pop to the international community. This year was no different as the first day of the M Countdown show saw thousands of K-Pop fans flock to the LA Staples Center to see 2018’s finest. 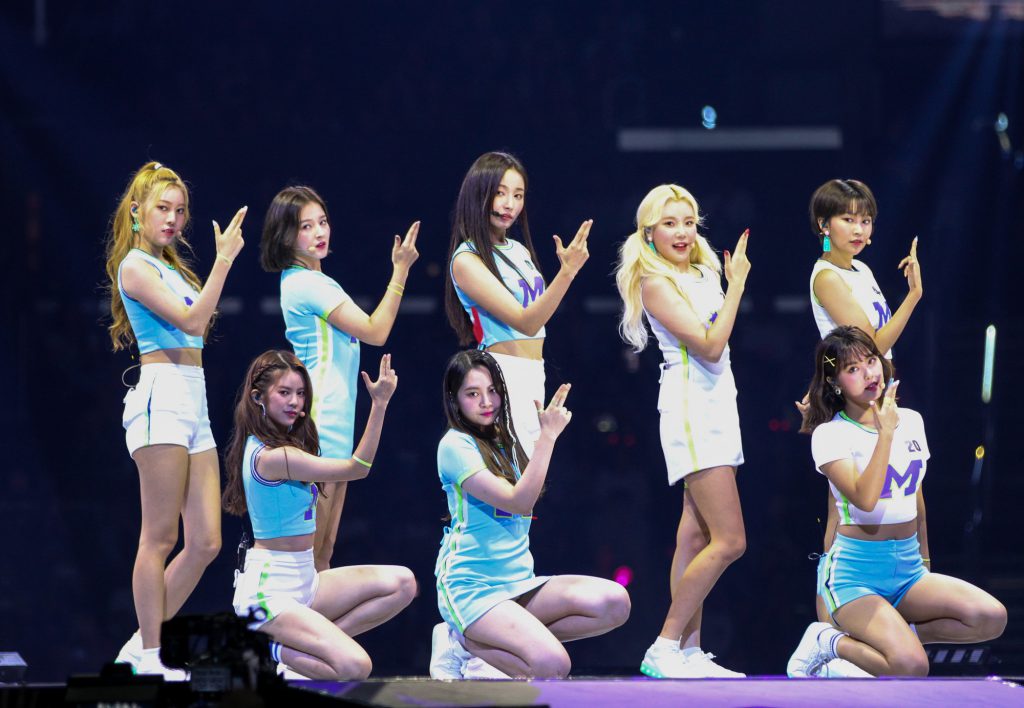 After filing into their seats, full of anticipation for great music and good fun, the audience was treated with Momoland performing their newest track, “BAAM,” which pumped up the crowd for the show. Their hit single “BBoom BBoom” closed out their performance. High energy and full of smiles,  the ladies’ energy proved how they were able to make one of the hottest comebacks of the year.

Mina and Jihyo of Twice, two of the night’s MCs, took the stage to introduce IN2IT. They showed off the funky beats of their newest track, “Sorry For My English,” and impressive voguing choreography of “Snapshot.”

Seasoned hip-hop duo Dynamic Duo took to the stage next and got the crowd bobbing their heads to, “Hot Wings.” Solo artist CHUNG HA joined the duo and spiced up the performance. 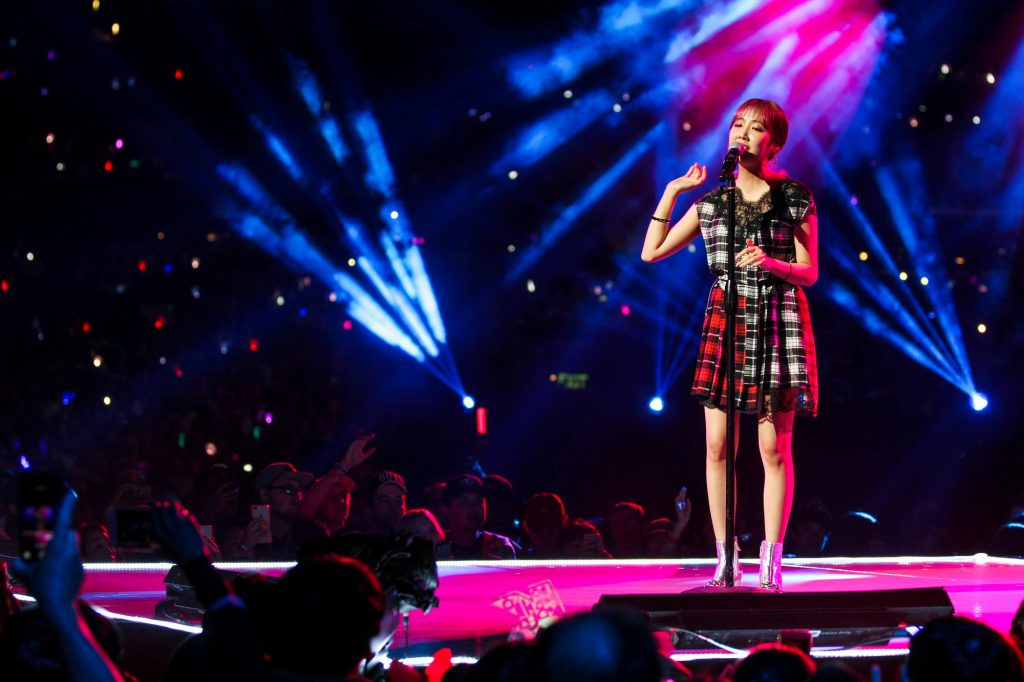 Singer-songwriter Mia took the stage next, calming the buzzing atmosphere with her soothing, R&B styling. She sang “Blind,” which was featured on Mnet’s Breakers, and “City of Stars” from the popular musical, La La Land. 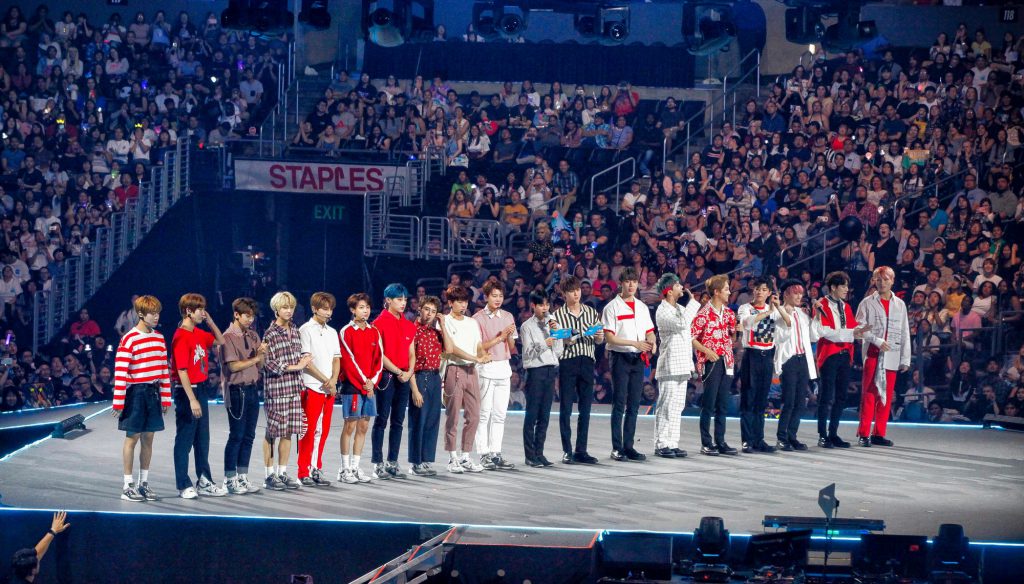 MCs Daehwi and Minhyun of Wanna One hit the stage to introduce rookie groups IN2IT and Golden Child for the “Who’s Next” segment. Starting with a serenade battle, started with a serenade battle, IN2IT’s Inho crooned “When We Were Young” by Adele, followed by Golden Child’s Joochan with “Just the Way You Are” by Bruno Mars. They finished the segment with a “snapshot” posing battle, showing off their best poses for their giddy fans. 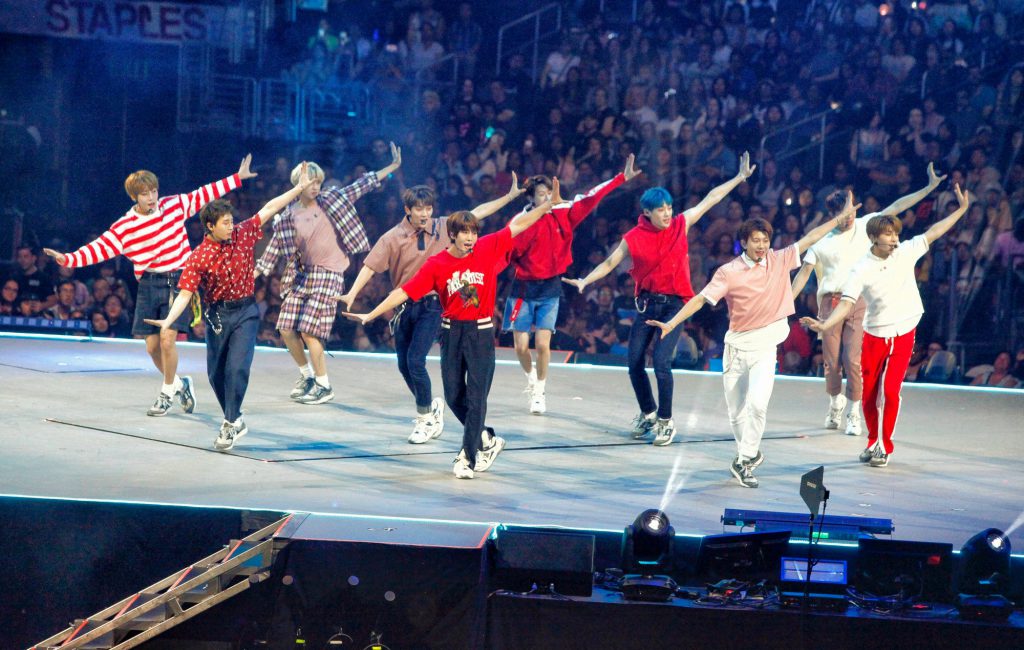 After the “Who’s Next” segment, Golden Child remained on the stage and started their performance with their latest single, “Let Me,” followed by their energetic debut track, “DamDaDi.”

A special surprise followed, a performance by Twice’s Jihyo, Tzuyu, and Momo. The three showed off a powerful cover of Beyonce’s “End of Time,” showcasing a sexy side of the members that is not often seen through Twice’s typical feminine performances. 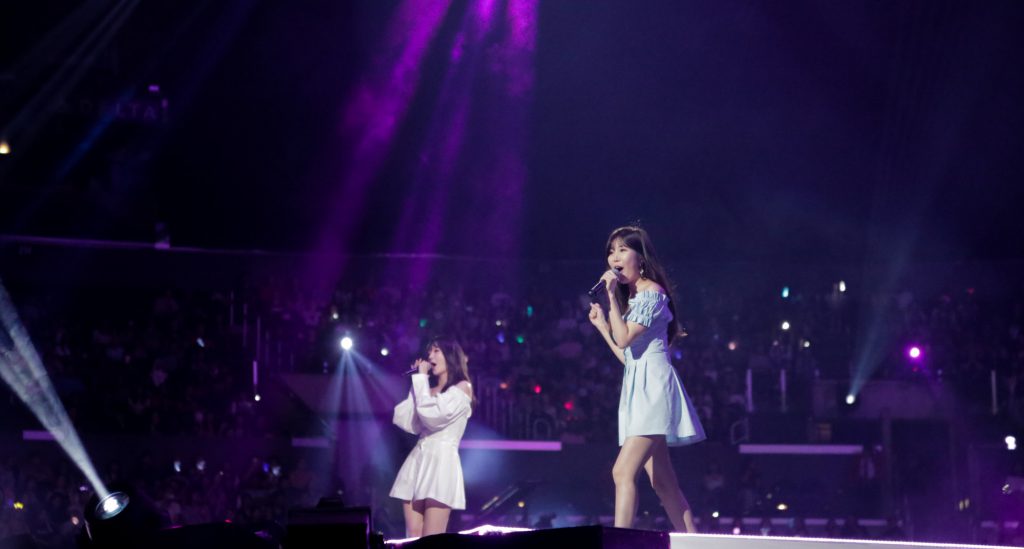 OST queens and powerhouse vocal duo, Davichi, took the stage with their heartfelt ballads, “Nostalgia” and “This Love,” which was included in the soundtrack of popular drama Descendants of the Sun. For their final performance, they brightened up the Staples Center’s atmosphere with their 2009 hit “8282.” 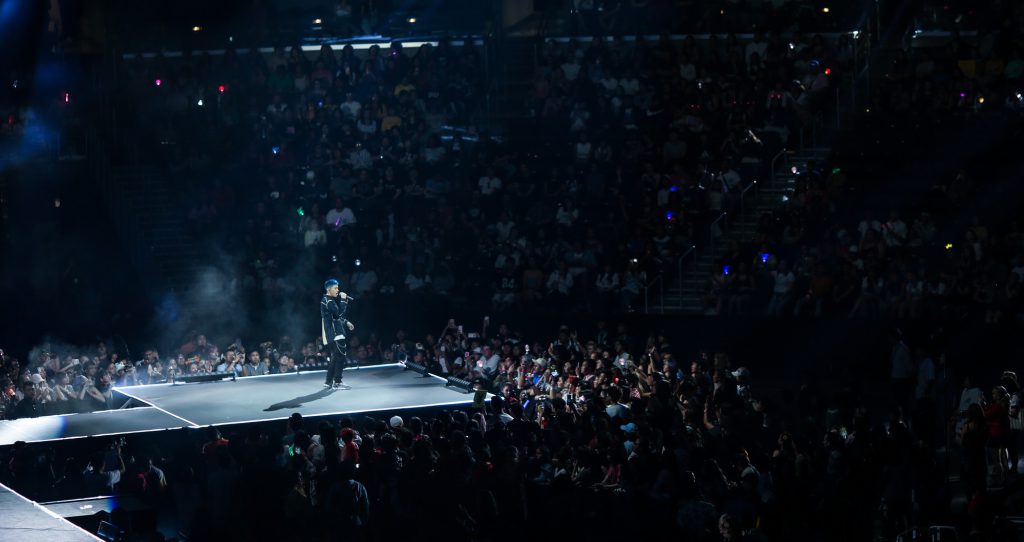 Next to hit the stage was one of Korea’s hottest hip-hop, R&B singers, Crush. He started with one of his newer releases, “Bittersweet,” and then was replaced by his seniors and Amoeba Culture founders, Dynamic Duo, who performed their popular track, “BAAM.” Dynamic Duo then invited Crush back up to the stage to get the crowd jumping to their track, “Friday Night.” 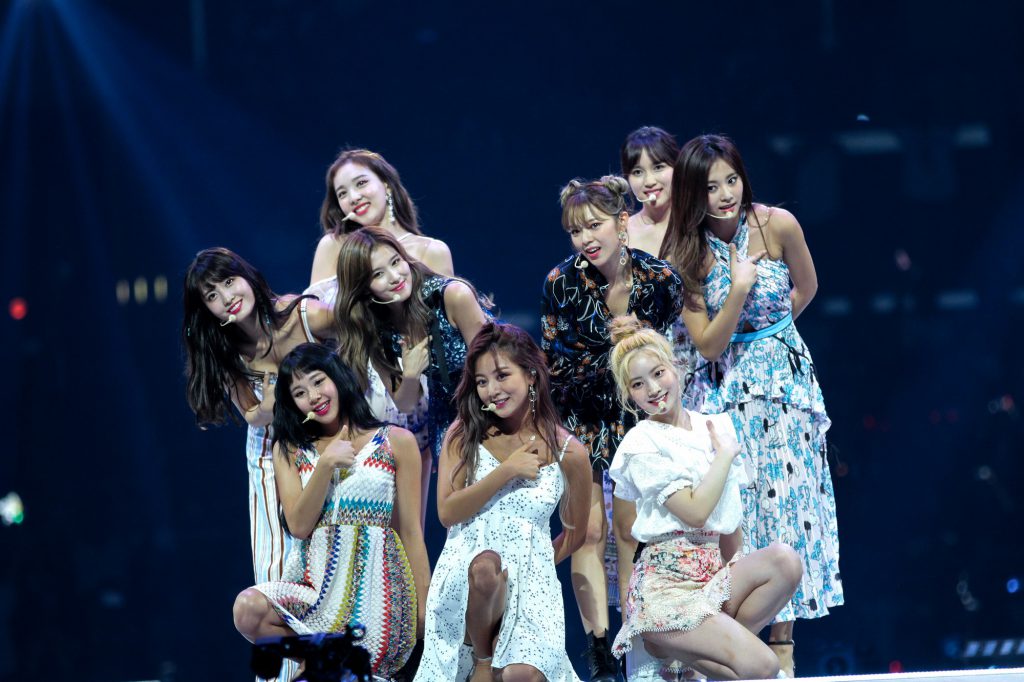 One of Korea’s most popular girl groups, Twice, was up next. The crowd roared as they started with a performance of their newest track, “Dance the Night Away,” and their cute, quirky track, “What Is Love.” They finished their performance with their most popular tracks, “Likey” and “Cheer Up,” and had everyone in the crowd dancing along with them. 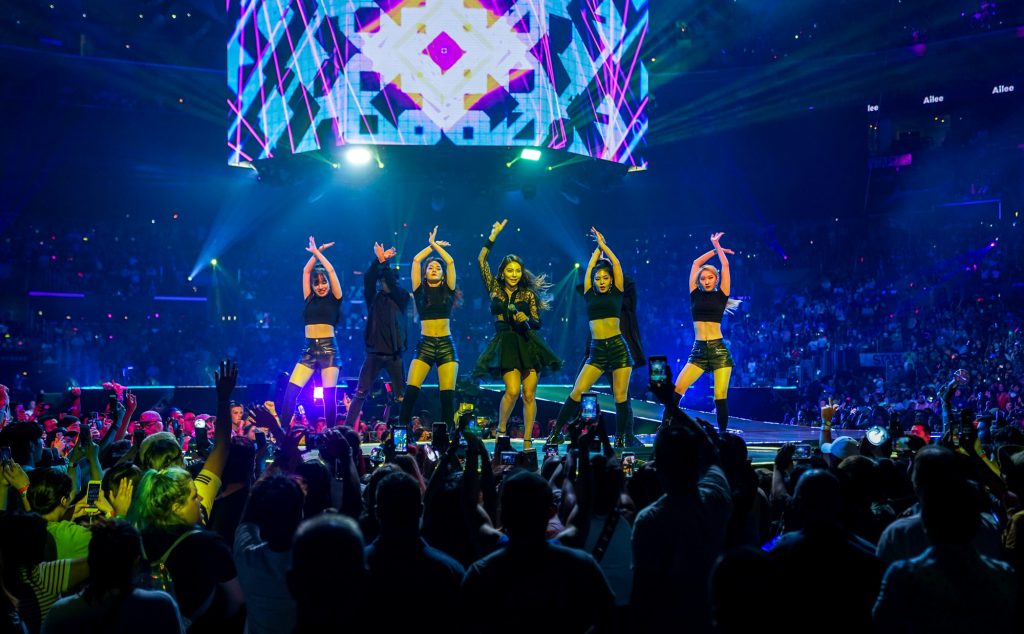 Korea’s own diva came next, powerhouse vocalist Ailee. She showcased her signature belt to the adoring crowd with “You&I.” “I Will Show You” followed, and she had the crowd jumping with her cover of Juncoco and Advanced’s “Atmosphere.” 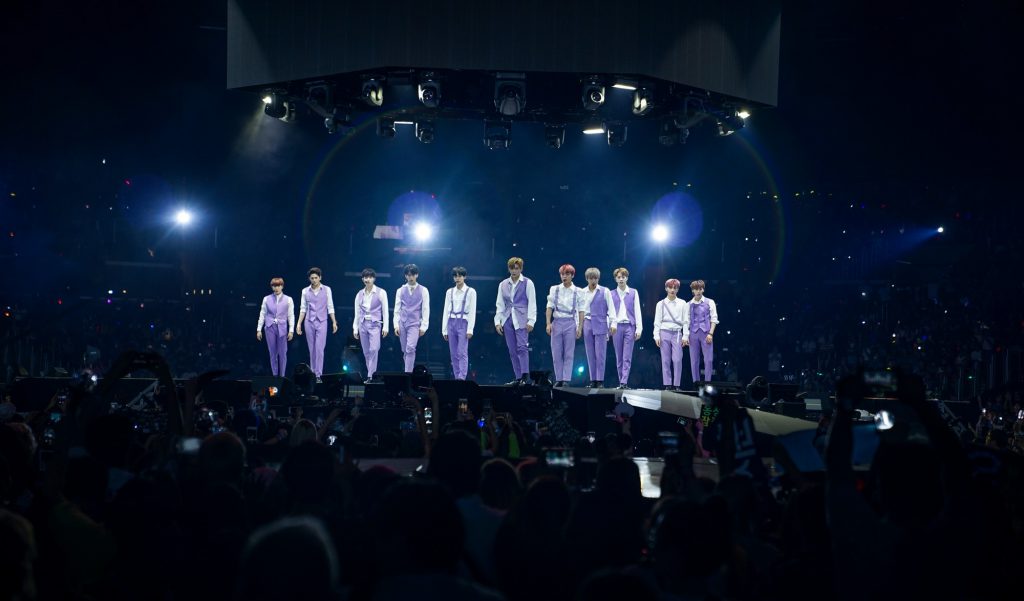 The final performance of the night was one of the hottest K-pop groups of the year, Wanna One. The stadium was filled with fans cheering for what would most-likely be their last performance in the United States before their contracted disbandment. Cheering more loudly and enthusiastically than ever, the crowd was treated to their latest title song, “Light.” They then participated in a special segment where to make their fans’ wishes come true by accepting their requests. The boys show their aegyo, serenaded the crowd, and showed off their best sexy dance. “Energetic,” their debut song, followed the special segment. To finish off the night of wonderful music and entertainment, the group closed their performance with slower-tempo “IPU” and catchy, fast-paced “Burn It Up” before saying goodbye.

At the end of the show, all of the artists came back on stage to say thank you to their fans one last time.