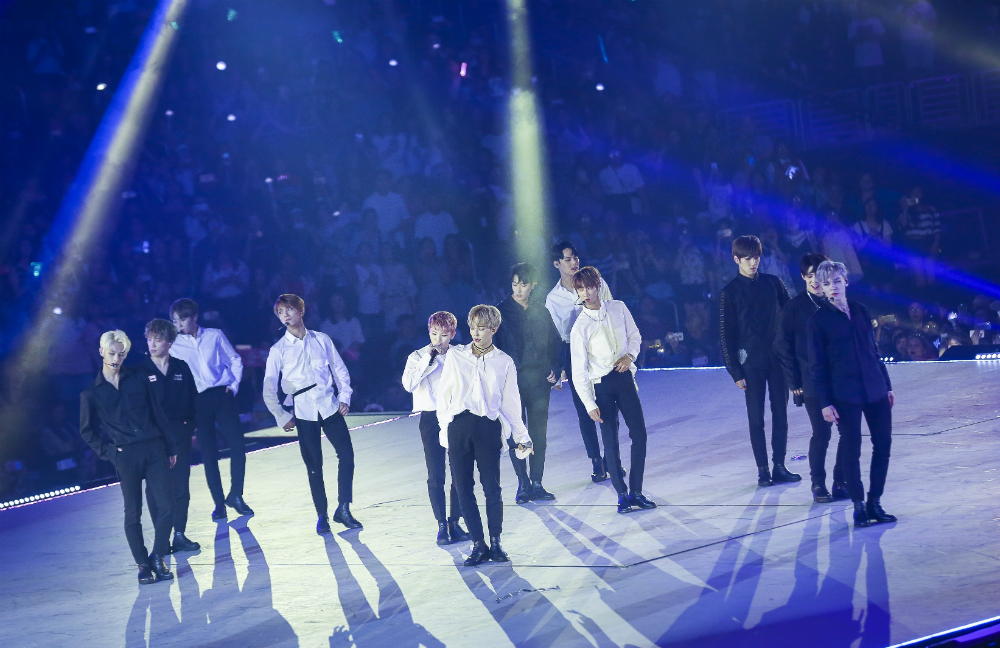 KCON 2017 Presented by Toyota kicked off the first of two jammed packed nights of concerts on August 20th at the Staples Center. Under the banner, “#Let’s KCON,” this year’s event broke new records and attracted 85,000 fans over the span of three days and sold out both nights of the M Countdown concerts. Day 1 consisted of artists SF9, Cosmic Girls, Girl’s Day, Seventeen, VIXX, and Super Junior D&E. With a lineup spanning different eras in the Hallyu Wave, the first night of the M Countdown concerts catered to both new and veteran K-Pop fans. 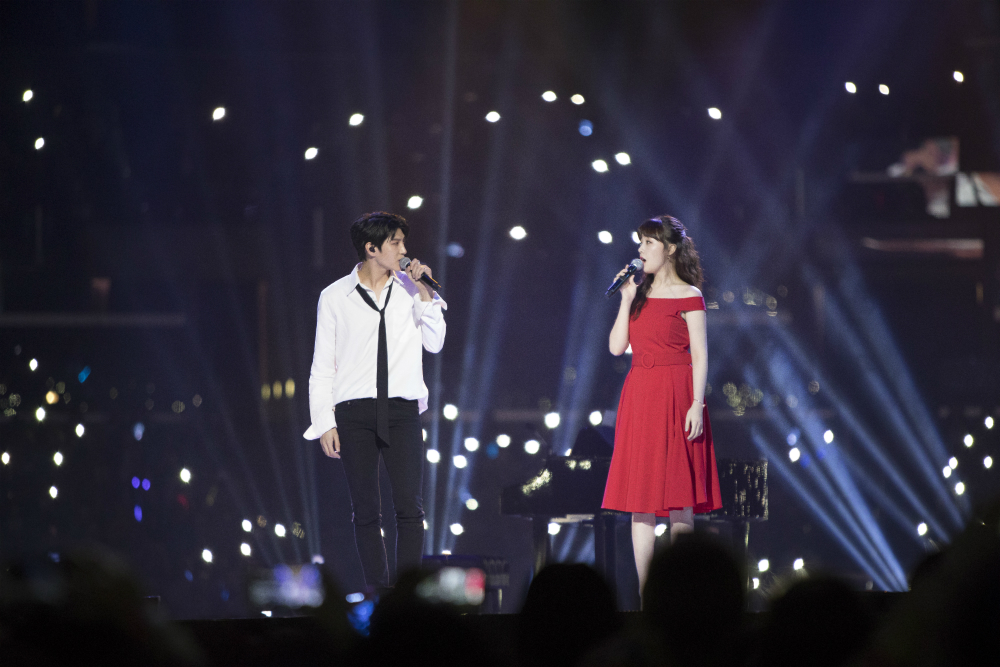 Starting off the night’s festivities was a special duet between VIXX’s Leo and Girl’s Day Minah. The audience was asked to turn on their phones’ flashlights and hold them up high, creating an all around beautiful, starry night. Leo and Minah then appeared and performed a heavenly rendition of “City of Stars” from the award-winning Hollywood film La La Land. Both lead vocalists in their respective groups, Leo’s and Minah’s powerful voices had the crowd wrapped around their fingers and singing along. 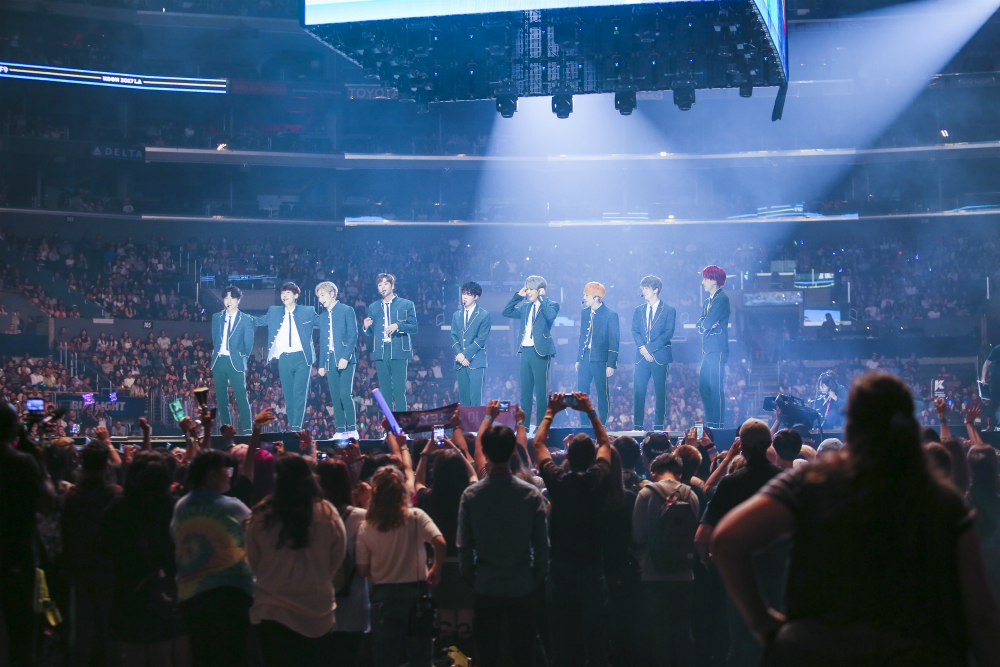 Following the beautiful duet was rookie group, SF9. The nine-member group are the freshest faces at this year’s KCON after making their debut last October. SF9 (Sensational Feeling 9) performed a medley of their songs, “Fanfare,” “Easy Love,” and “Jungle Game” where they showcased their acrobatic skills with their intricate choreography. 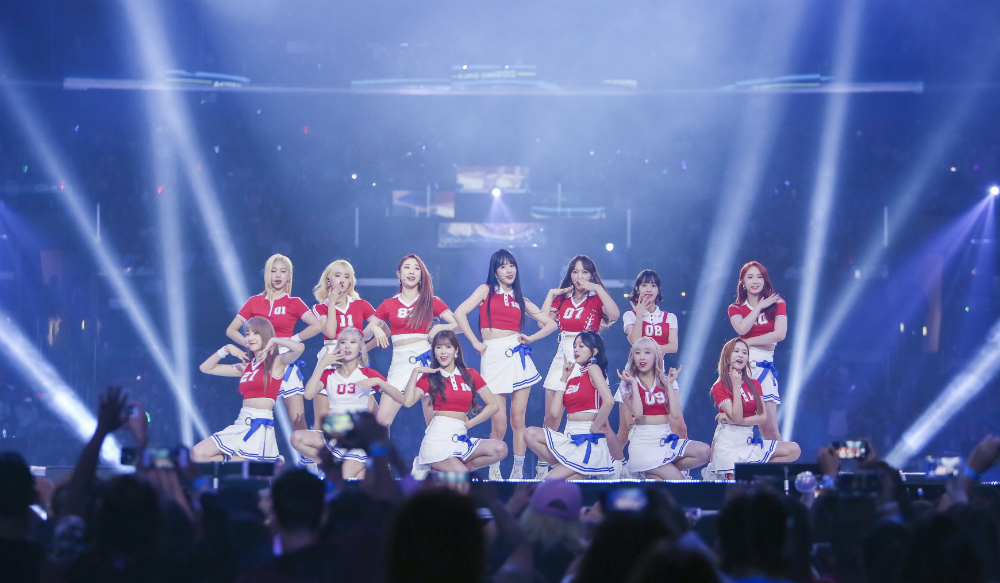 The next group to take to the stage was Cosmic Girls (a.k.a. WJSN). The K-Pop group made their debut in early 2016 and sparked headlines for its thirteen-member Korean and Chinese lineup following the joint efforts of Korea’s Starship Entertainment and China’s Yuehua Entertainment. The girls strutted through the GA floor and started off with a high energy, cheerleader themed performance of their song, “Happy” followed by equally energetic and aegyo-filled performances of “I Wish” and “Secret.” 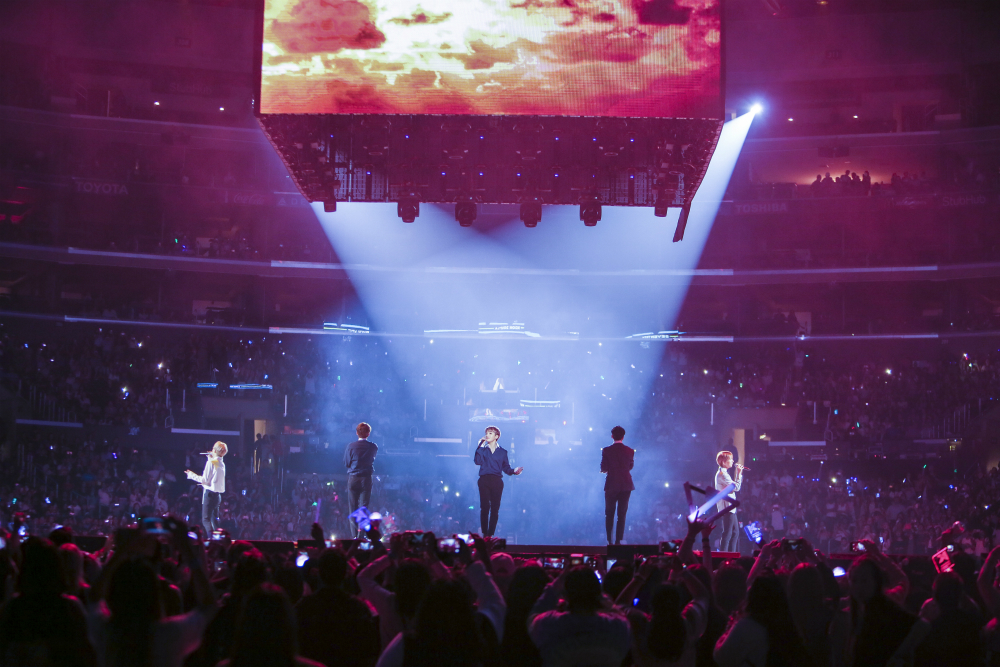 Next, SEVENTEEN’s three unit groups appeared and caught the crowd off guard with a special stage.  First, the Performance Team (Dino, The8, and Jun) performed their catchy track, “Swimming Fools,” where they showed off their slick moves.  Afterwards, SEVENTEEN’s Vocal Team (Junghan, Joshua, Woozi, DK, and Seunggwan) appeared, decked out in tailored suits, and performed “Habit.” Finally, the group’s Hip-Hop Team (Mingyu, Vernon, S.Coups, and Wonwoo) made their grand entrance through the P1 seated sections and performed “Check-In” from the sub-unit’s mixtape. 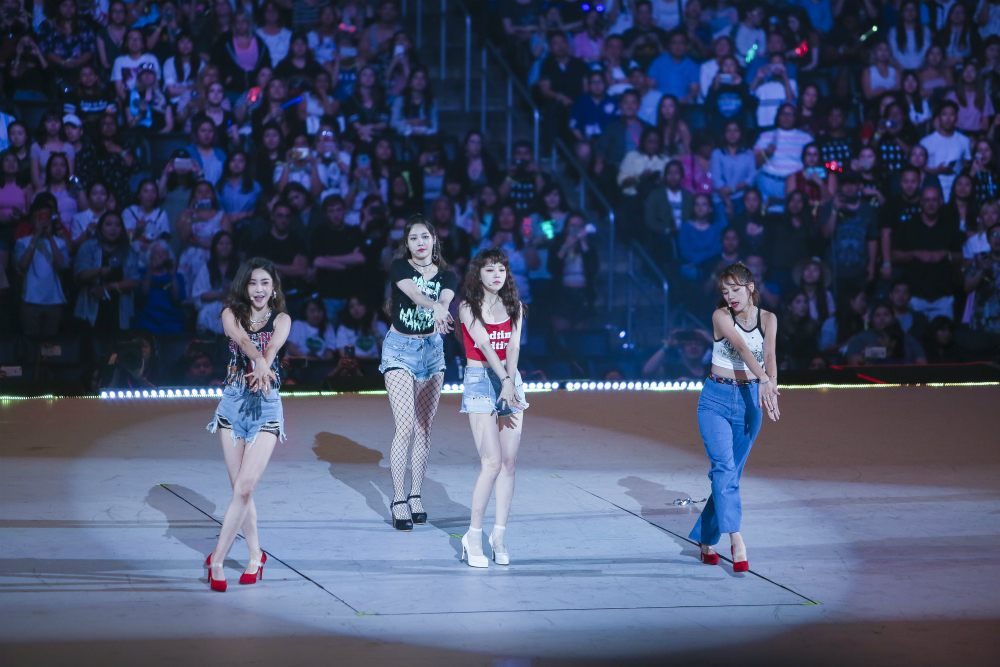 Next up was the one and only Girl’s Day! Since their debut in 2010, the girls have destroyed the charts with back-to-back hit songs. The group kicked off their set with their comeback song, “I’ll Be Yours,” a super catchy bop reminiscent of a Broadway number. The girls then performed their sexy  and iconic track, “Something” before closing off with their funky track, “Ring My Bell.” 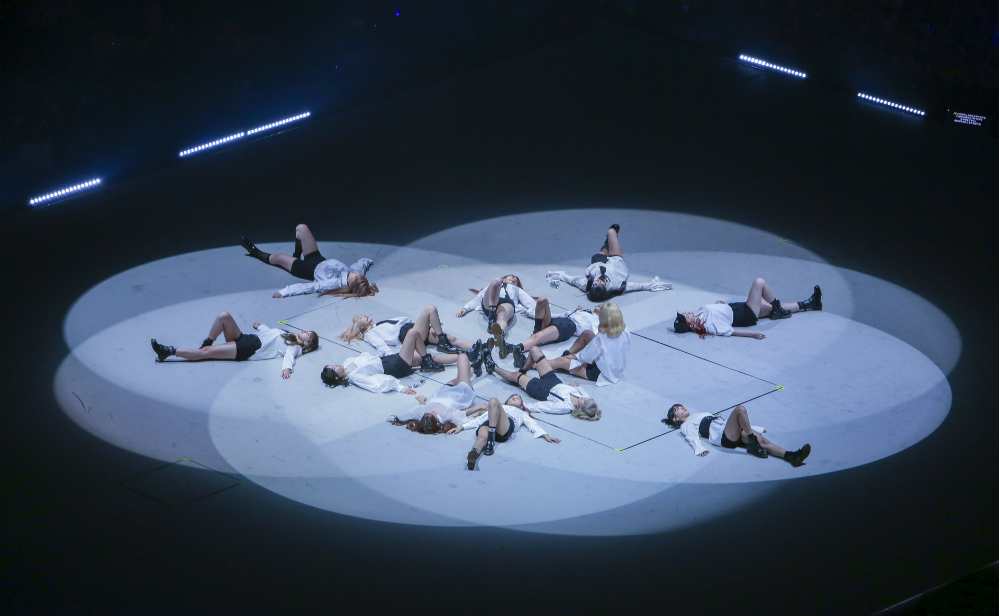 A special stage was then held to commemorate some of the most iconic K-Pop dances to date. Cosmic Girls returned to the stage dressed in black shorts and white button-up tops and performed BTS’ “I NEED U.” SF9, decked out in polished suits, then took their turn on the stage to perform Super Junior’s “Sorry Sorry” alongside the girls. 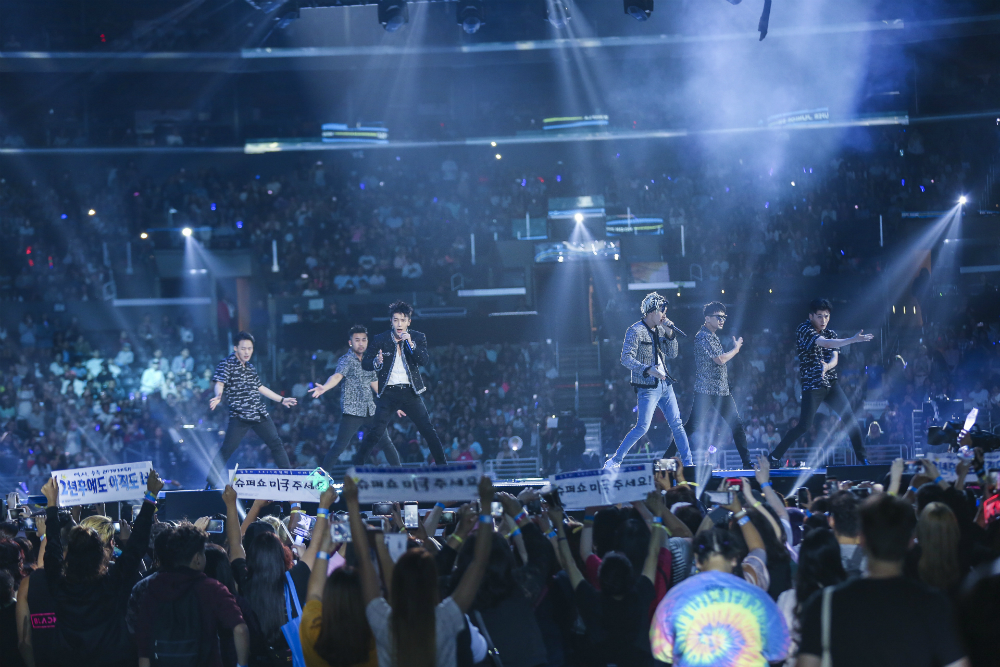 The next act to take center stage can be credited for paving the Hallyu craze. Super Junior D&E appeared and were finally back on the  stage following the completion of their mandatory military enlistment. Donghae and Eunhyuk kicked off their set with their newest song, “Growing Pains” that showed off the duo’s’ powerful vocals.  To spice things up, Donghae and Eunhyuk performed their funky, high-energy tracks “I Wanna Dance” and “Saturday Night.” Their playful and humble demeanor and stage presence charmed the crowd. During their final song, “Oppa Oppa” the duo let loose and danced their heart out. It had been a long time since they last stood together on a stage, and they left fans with more than enough to eagerly await their future projects. 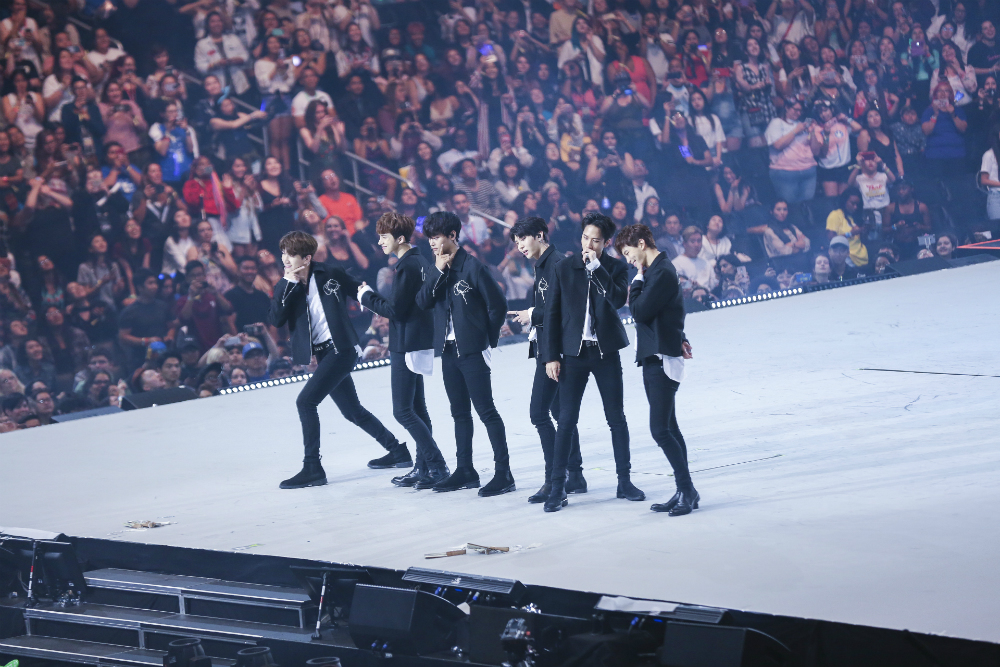 Following the duo was VIXX who started off with a beautiful fan dance for “Shangri-La.” Before moving forward to their next song, the six-member group held a special “piñata” event! New to the LA concert, the “piñata” a segment where idols can play various interactive games with the crowd. For this round, the members’ activity was to go to each side of the 360 stage and strike a pose. After the fun photo opp, VIXX jumped right back in and performed “Black Out” and a breathtaking and majestic performance of “Fantasy.” 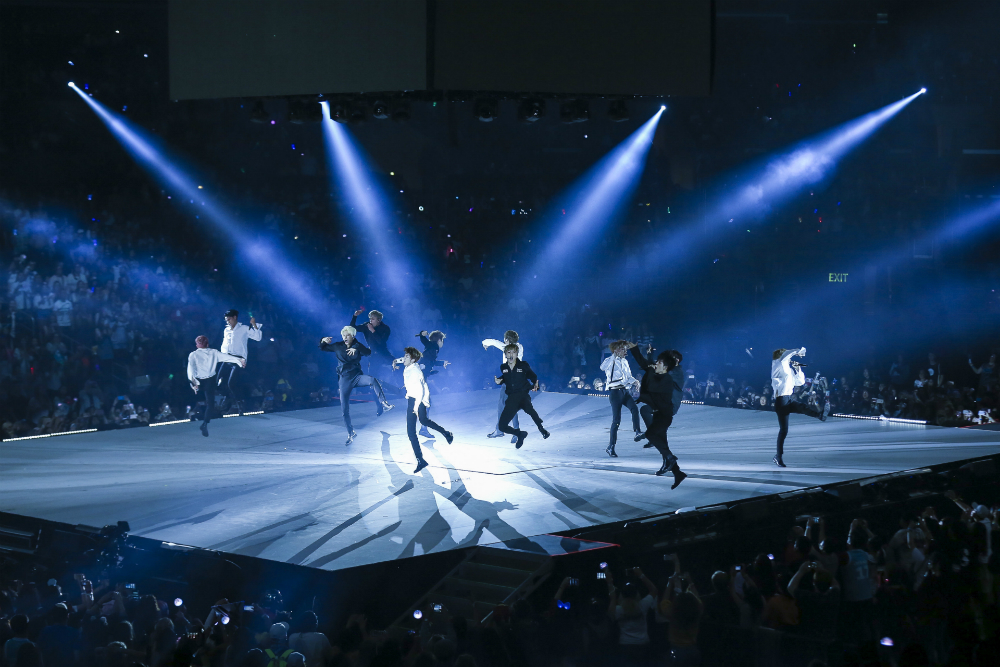 Closing off the night was none other than Seventeen. Having only just debuted in 2016, the thirteen-member group received an explosive response that has acquired them an ever-growing fanbase. The boys started things off with their emotional and synth-heavy track “Don’t Wanna Cry.” The group’s rappers then took the spotlight with their heavy, beat-driven song, “Rock.” Seventeen then participated in KCON’s “piñata” event where they had to freestyle to Michael Jackson, Bruno Mars, and encouraged fans to dance along to their song, “Mansae.” Then, the boys each signed a shirt and used a T-shirt launcher to shoot each one into the eagerly-awaiting crowd of fans. After their “piñata” segment, Seventeen had everyone up on their feet and dancing as they closed off KCON M Countdown Day 1 with “Very Nice.”