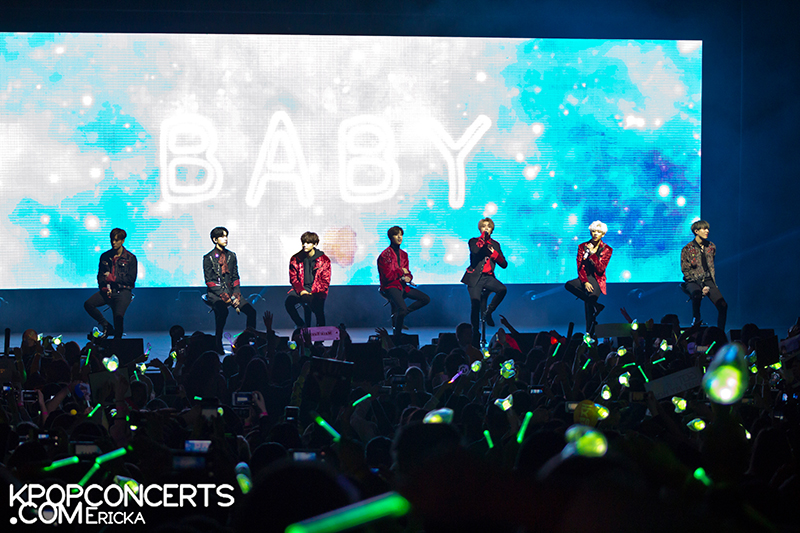 Take your seats, fasten your seat belts, and grab your light sticks. We’re about to experience some turbulence!  After only six months since SubKulture Entertainment brought them over for their FLY in USA tour, GOT7 returned to the States for the final leg of their GOT7 Flight Log: Turbulence in USA.

On January 29, thousands of fans flocked to Pasadena to attend the sold-out fanmeet. Before the boys even took to the stage, the Pasadena Civic Auditorium was lit with flailing neon green light sticks as fans sang along to “Hard Carry.” The lights dimmed, signaling the start of the fanmeet and fans by the stage rose to their feet, starting a ripple effect as the rest of the audience quickly followed suit. Finally, GOT7 appeared! They took their seats and serenaded fans with “Let Me” (co-written by Mark) and the smooth R&B track “Prove It”(co-written by JB.) 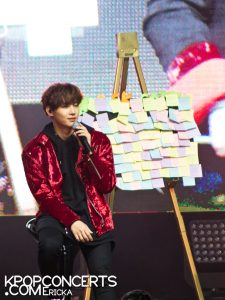 Host Danny Lim from KCON and GOT7’s interpreter, TK, joined the boys onstage after their set to proctor the Q&A session. Onstage was a board filled with burning questions sent in by LA Aghases and each member had the opportunity to pick their favorite ones and address it live. When asked about their ideal type, Jackson stated that his was someone who only loves him, justifying that the members could not share the same girl’s love. He continued to tease the squealing fans by saying, “I’ll meet you after the show.” 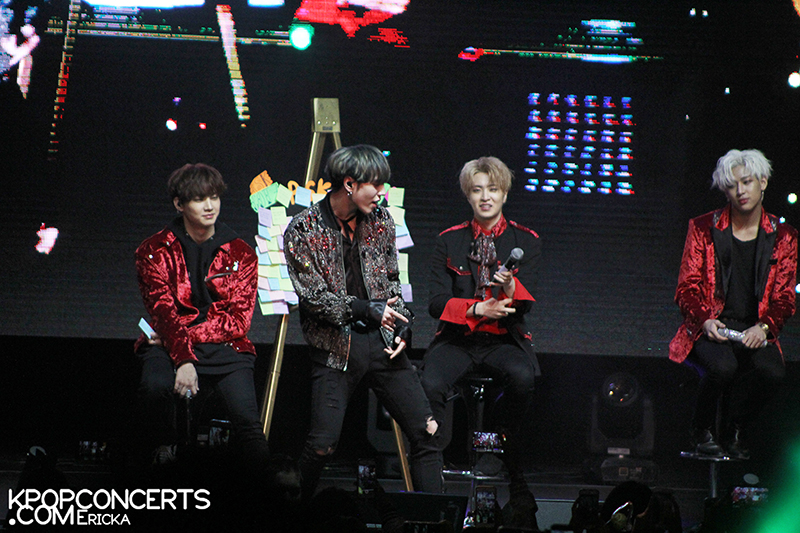 Some members meticulously picked out questions that would surely evoke some fan service. When asked about his favorite dance moves, Mark diverted the attention to Yugyeom, “I like to watch Yugyeom’s sexy dance!” In response, the GOT7 maknae performed a short, sexy routine that led to shrill squeals from fans. BamBam’s question asked him and Yugyeom to dance to “Juju on That Beat.” Not one to reject a dance challenge, BamBam dragged Yugyeom up once again and they performed a small snippet of the viral dance routine. As he took his seat, BamBam slowly brought his left arm up and quickly did his signature dab for the audience. 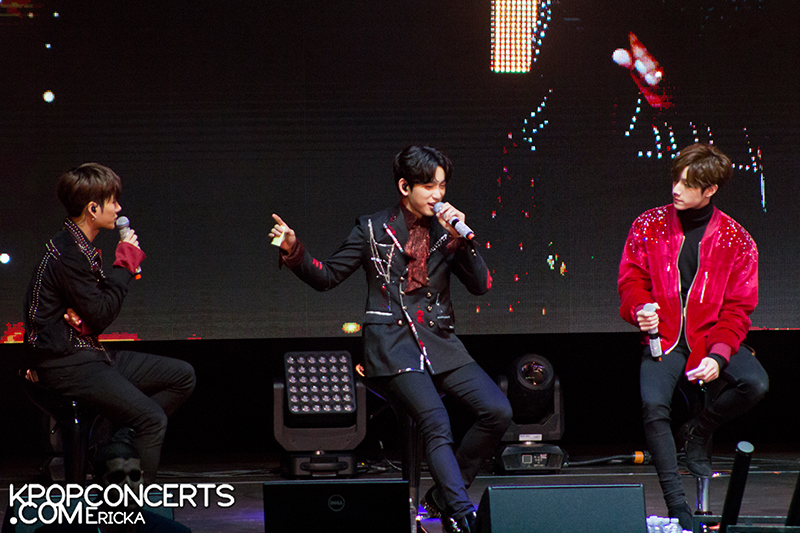 Once the Q&A session wrapped up, the boys stood up from their stools and performed “Boom x3” and “Just Right,” showcasing their sleek dance moves and synchronization. They then went right into their next segment, “Guess That GOT7 Song.” The members were given a few seconds to listen to the songs and had to be the first to yell out the correct song title in order to receive a point. Those who give an incorrect answer would have to perform squats. After several competitive rounds, Youngjae won the game while BamBam and Yugyeom received the lowest scores and had to inhale helium and sing one of their songs with their high pitched, altered voices. BamBam, being one of the most playful members, took the punishment with ease. He even inhaled more helium and said, “I sound like Silento!”and proceeded to sing and dance Silento’s “Whip (Nae Nae).” 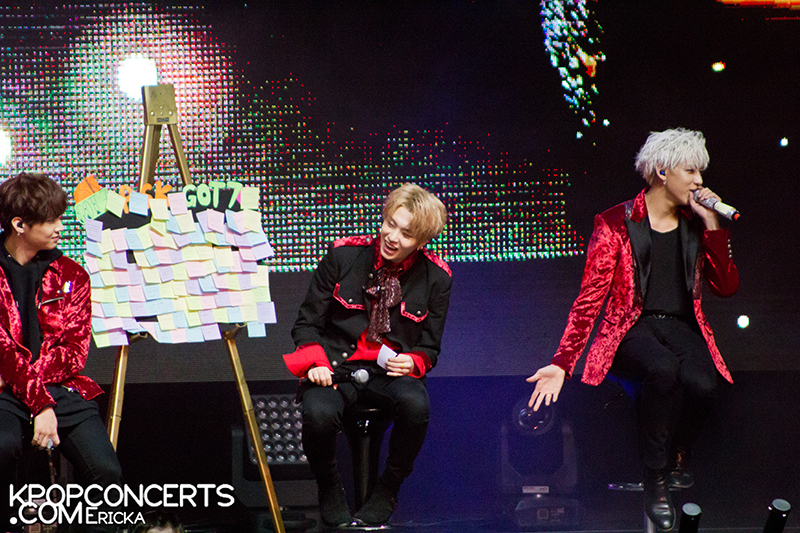 The final game involved seven lucky raffle winners who joined GOT7 onstage for a fun game of jegichagi, a traditional Korean game similar to hacky sack. BamBam’s partner, Holly, shared her experience being his partner, “He repeated my name sweetly and then asked for my age in which I replied ‘24’. Then he goes, ‘Oh, Noona!’ and I was totally in pain from his cuteness. But Jackson decided to kill me further by yelling, ‘Aegyo, Aegyo!’ So Bambam leaned into me and murmured “Noona’ into my ear…I was SO DEAD!” The teams were given less than a minute to practice and perfect their skills before the competition started. The whole segment was filled with laughter as the members goofed around with their partners onstage. Mark and his partner ultimately won the game with 16 points, just a few points ahead of Jinyoung and his partner. After the game, everyone left the stage and the audience was shown exclusive, behind-the-scene footage from the “Hard Carry” music video shoot. The boys quickly made their way back onstage and performed their hit songs, “Fly” and “If You Do.” 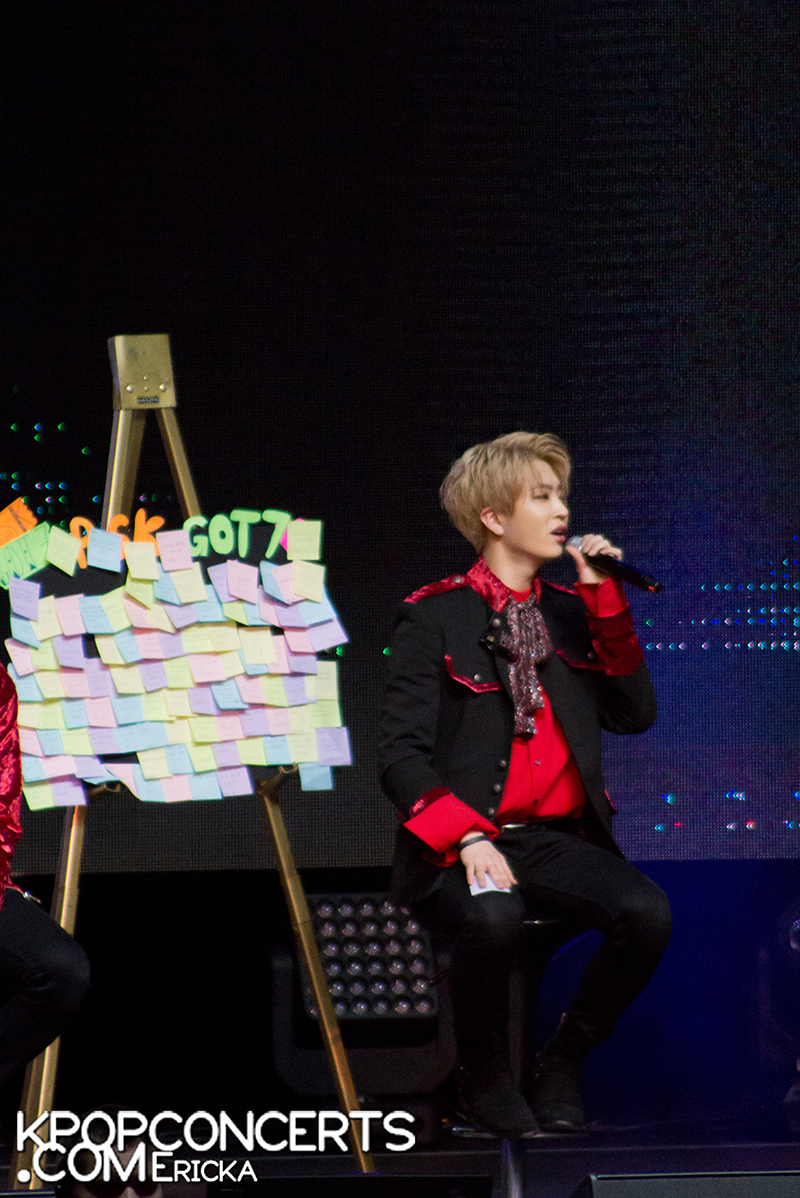 The night was coming to the end and the members took the time to speak to their fans and expressed their gratefulness for their never-ending love and support throughout the years. During Youngjae’s speech, he excitedly announced that there was a special guest in the audience and gestured towards the balcony. In the dead center, R&B singer and former American Idol contestant Elliott Yamin and music producer Sanjoy stood up and greeted everyone. Youngjae had always admired Elliott Yamin’s music and had sung his song “Wait For You” when he auditioned for JYP Entertainment. Knowing it would mean the world to Youngjae to meet his idol, Aghases took to Twitter and tweeted Elliott, explaining that his biggest Korean fan was in town and would love to meet him. The fans’ overwhelming messages caught Elliott’s eye and led to the two artists meeting at the fanmeet. Youngjae expressed his immense gratitude by singing a small snippet of “Wait For You” in front of the fans and Elliott himself. 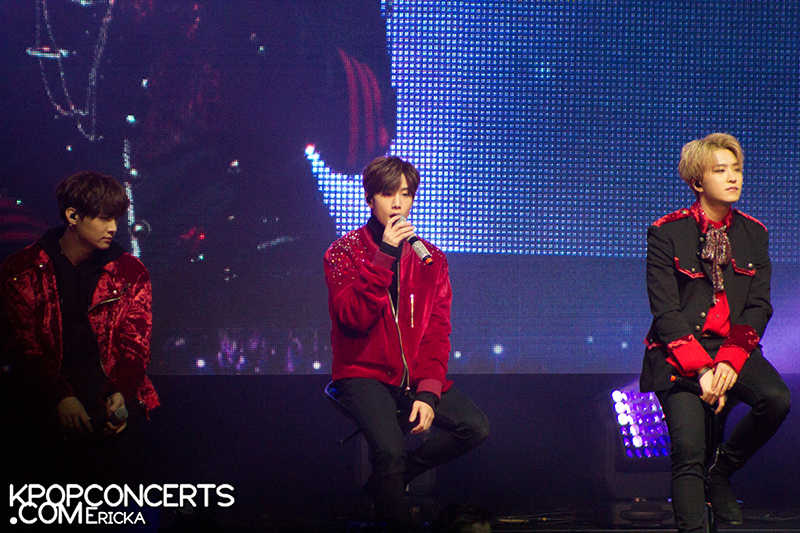 Mark’s closing speech, however, caused the biggest stir of the night. After he thanked the fans for making this event happen and allowing him to see his family again, the LA native let slip that they may be back sooner than expected. “We will come back this year. Hopefully….maybe for KCON or something. We’ll have new songs by then.” Whether it was an actual hint, a slip up, or just a teasing remark, Mark definitely knew how to keep everyone on their toes!

For their final set of the night, GOT7 delivered a high energy performance of “Hard Carry” that had the whole crowd turning up in their seats and wrapped up the night with “Home Run.” As they made their way around the stage, they serenaded fans, threw towels, and even took selfies to ensure that Aghases would leave with lifelong memories of the magical night.

Special thanks to SubKulture Entertainment for allowing Kpopconcerts to cover the event.