On Sunday, October 14th, DPR Live wrapped up the North American leg of his 2018 ‘Coming To You Live’ Tour at The UC Theatre in Berkeley, California. DPR Live debuted under Dream Perfect Regime as their first official artist on March 14, 2017 with Coming To You Live, a full-length album consisting of seven tracks including “To Myself,” “Laputa” and “Know Me.” Before his official debut, he released singles such as “God Bless” and “Thirst.” Despite it being his first album and world tour, DPR Live sold out almost every single show and Berkeley/San Francisco was no exception.

DJ DaQ opened up the night with his set where he mixed fan-favorite Korean tracks such as “Mic Drop” by BTS and “Okey Dokey” by Mino and Zico with popular American songs like “Havana” by Camila Cabello and “Lean On Me” by DJ Snake and Major Lazer. Starting the show with an opening act seemed a bit foreign to me since it isn’t too common for Korean concerts but DJ DaQ definitely warmed up the audience because when DPR Live finally came on stage, we were more than ready.

DPR kicked off the main show with “Know Me” and although he does not have official fan chants for his songs like most idol groups do, the audience sang along to all the “killing parts” (essentially all the English parts). The DJ did an amazing song on fading out the music at certain parts so all you heard were the fans singing in a way that did not ruin the flow or mood of the song. DPR’s smile when the entire room knew his lyrics made fans sing even louder and the mood even brighter.

Next, was “Cheese & Wine.” Now, artists often have bottles of water on the edge of the stage to get a sip in between songs. I lost track of how many bottles of water he went through because the water was not for drinking. He takes one sip and then uses the rest to spray the pit audience members. He even took a sip of a bottle, closed the cap, and then threw it into the audience as a fan service gift. “Laputa” followed with even more waterworks as he ran around the stage, making sure to not leave a single side of the audience unattended. He pointed his mic at fans in the front row and even sat down on the edge of the stage, giving lots of fan service throughout the night.

Three songs in, DPR then took the time to talk to the audience where he gushed about his gratitude for his fans and how he likes to take moments like this to soak it all up because he gets too into the show and blacks out from all the excitement. He then prefaced his pre-debut songs by saying “If you know it, turn the **** up. If you don’t know it, turn the **** up.” Although not as many people knew the lyrics, it was touching seeing how he wanted to share his older songs with us.

The excitement continued as DPR Live performed “Right Here Right Now” and “Movie Shoot.” Cline joined DPR Live on stage for “Please” after a little dance break. Then it was time for “Jasmine,” a crowd favorite. Everyone turned on their cell phone lights and the entire venue looked dazzling.

And if you are a fan of DPR Live, you cannot forget the man behind the scenes–Christian Yu. When he emerged from backstage, the crowd went absolutely wild and audibly cheered his name. He came out with the purpose of filming but I found myself staring at him as much as I stared at DPR Live.

DPR Live then teased fans by asking what our favorite songs are. Many people shouted “Jasmine” and “Text Me” but he said he wasn’t hearing the answer he wanted and proceed to ask us “Is You Down?” before launching into the song. After “Text Me,” he again took the time to have a heart-to-heart with us about how he’s been doing this for around three years and how him and his crew has come so far despite all the doubts and negativity people threw at him.

He then went into the “last song” of the night, “Martini Blue.” When he exited the stage and the lights blacked out, the entire crowd seamlessly began chanting “DPR we gang gang” over and over for a few minutes before the lights went on again the “DPR” sign on the DJ table lit up and we knew he was coming back out soon.

DPR Live finished the night with his trademark song “To Myself,” complete with multiple water bottle sprays, and every single person in the room shouted along to “DPR we gang gang.” 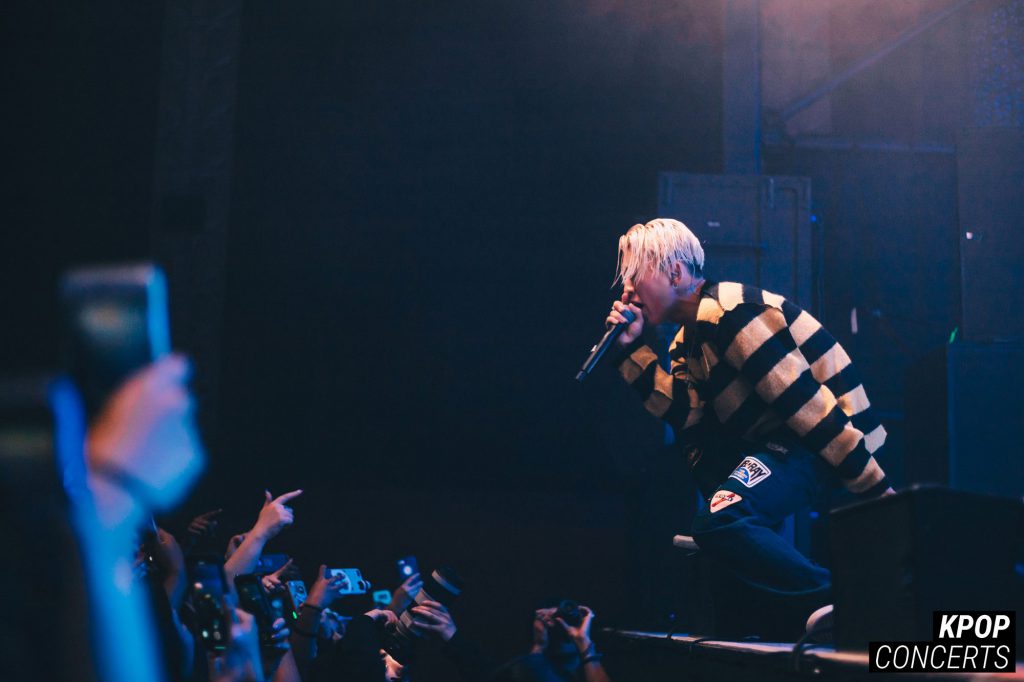 DPR Live is one of those artist where he does not need back up dancers and multiple costume changes for you to enjoy his live performance. He had amazing stage presence, he knew exactly what to do to hype up the audience and the DJ and sound crew did a great job, cutting off the music so that the audience would be the sole voice during memorable parts of the song.

Although this is his very first world tour, the fact he can sell out shows after shows is a testament to the hard work him and his DPR gang has put in. Like he mentioned in his closing, he has worked so hard and there has been so many roadblocks and people who told him he could not achieve his dreams. I am happy to say he proved all those haters wrong and that I am helping to support his dreams by going to his concert and sharing my experience with you all. I am hopeful that he will be back soon with more dope tracks and another amazing tour!

[GALLERY] DPR 'Coming to You Live' in Berkeley

BTS and Steve Aoki Announce New Collaboration "Waste It On Me"