This year, KCON hosted the first US edition of the #1 K-chart show in Korea, “M COUNTDOWN What’s up LA!” With spectacular performances by K-Pop idols F(x), Dynamic Duo, 2AM, Henry, Crayon Pop, Yu Seung Woo, Teen Top Exo, and G-Dragon along with special guests, DJ Koo and American rapper Missy Elliot, it’s fair to say that the second KCON concert outdid itself and was truly a musical extravaganza.

F(x) kicked off the night with a club remix of “Electric Shock“, courtesy of DJ Koo. Being this their third time in Los Angeles, the girls were charismatic as ever as they performed their newest song “Rum Pum Pum” accompanied by fanchants. The girls finished off their performance with the song suitable for the California weather “Hot Summer“. 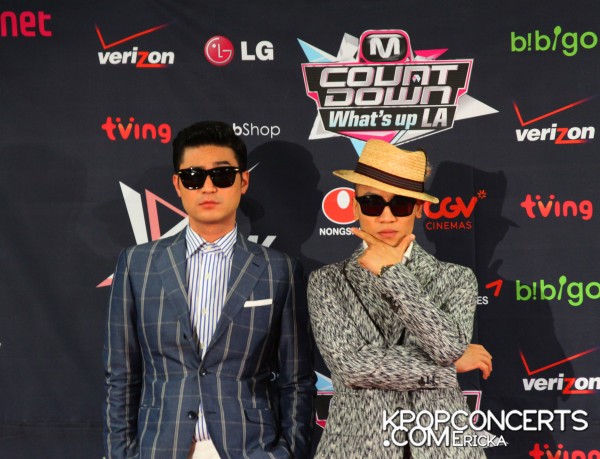 Dynamic Duo were up next and delivered an energetic performance. Dynamic Duo’s performance for their latest song, “BAAAM” had the whole crowd chanting along with the lyrics “Bad girl gone badder.”  Afterwards the duo performed their other hits, “Audience Check” and “Friday Night“.  With their smooth rapping, catchy hip-hop beat, and explosive personalities, Dynamic Duo made sure everyone in the audience were jumping along with them. 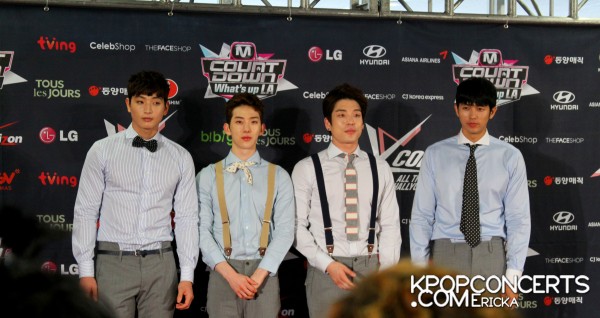 The crowd was shocked upon hearing the recognizable harmonies of Bruno Mars‘ “Just the Way You Are“. 2AM thus made their entrance with their rendition of the hit song, winning over hearts of their international fans. Afterwards, the boys reappeared atop rose-covered platforms as they sang “One Spring Day” and finished it off with “I Can’t Let You Go Even If I Die“. The amount of soul and passion they delivered with every word had the fans melting, it’s no wonder that 2AM are known as the songbirds of Korea. They are definitely a must-see live, videos and fancams don’t do their vocals justice.

Super Junior-M turned solo artist Henry took the stage and performed his latest track, “1-4-3″, featuring F(x)’s Amber. At the press conference, Henry explained that “1-4-3” depicts the struggle of a foreigner who moves to Korea (like himself) and is unable to express his feelings to his crush. “Because of the language barrier and culture barrier I had some difficulties.” Henry then gifted the attendees by singing the English version of his debut single, “Trap“.

Next up to take the stage was Super Star K finalist Yu Seung Woo! At the tender age of 16, Seung Woo wowed the crowd with his sweet yet powerful vocals. The young singer-songwriter started off with a K-Pop medley featuring American Idol finalist Heejun Han. Both having been finalists in their singing competitions, the duo sang sang an acoustic mashup of Psy‘s “Gentleman“, 4Minute’s “What’s Your Name“, SHINee‘s “Dream Girl“, and Sistar‘s “Give it to Me“.  Afterwards, Seung Woo performed his first single “Hello” which had all the girls squealing at the overwhelming amount of cuteness Seung Woo emitted with his flower boy charms.

Teen Top made their US debut at KCON and left fans with an unbelievably memorable experience. The group treated attendees by revealing their newest single “Rocking” at KCON. The arena went insane as the boys performed the song for the first time, complimented by lots of shuffling and c-walking type moves. The boys then followed the jaw-dropping performance with “Crazy” and “To You“. Teen Top put 110% into each and every move. After each song their exhausted pants echoed throughout the venue. Teen top gave it their all to leave a lasting impression, and boy did they do just that and beyond.

Cue the ear-piercing fangirl screams! Exo popped up from all corners of the stage accompanied with visually stunning displays that highlighted each member’s “powers”. The group then immediately took their places and created the infamous tree pose, signalling the start of “Wolf“. The fans went crazy for the boys, the best was hearing the fans’ howl back at them during the chorus. Following “Wolf” the group performed their latest track, “Growl” and showcased their shownmanship with the continuous switching of members. Not one missed a beat! Finally Exo finished it off with loads of fanservice while singing “365“.

One would think Exo drained everyone’s voices, however, another loud roar erupted for the final performer, G-Dragon. Joined by famed American rapper Missy Elliot, east met west for a spectacular hip-hop collab. First, Missy brought us back to the ’90s with “Get Ur Freak On” accompanied with her hip-hop entourage. G-Dragon then made his grand entrance with “Shake Up the World” atop an elevated platform. He dropped the beat with “One of a Kind” and then turned the arena into a club with “Crayon” and “MichiGO“. Missy rejoined G-Dragon to perform a special collab of “Drop it Like“, making the crowd go insane! As if that wasn’t enough, G-Dragon also performed “Niliria“, an intense hip-hop track off his upcoming album Coup D’etat ft. Missy Elliot.

Although the two and a half hour concert went by fairly quickly, the fans were left with vivid memories of one of the greatest K-Pop concerts ever held.  If you attended KCON only knowing one or two artists, you’d definitely leave with new-found admiration for each and every one of them.  Overall, KCON delivered an astounding two-day event that brought thousands of people together to celebrate their love for “all things Hallyu”.