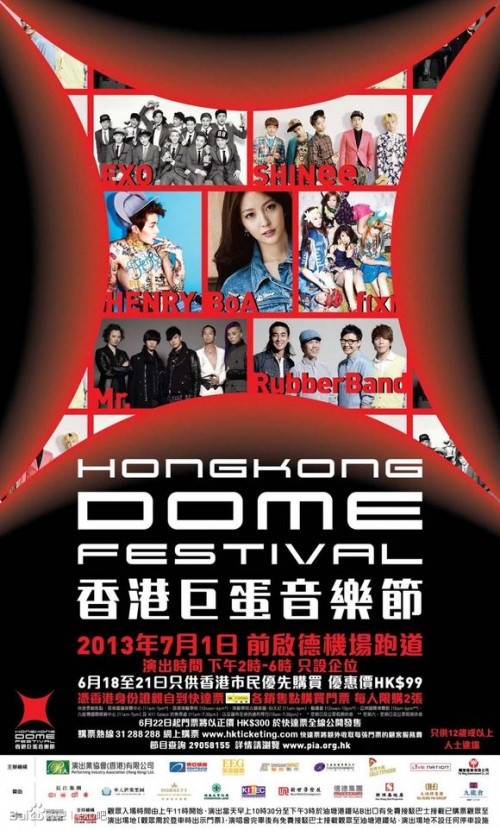 K-pop fans in Hong Kong were delighted to hear that some of the biggest K-pop idols would be attending and performing at the ‘Hong Kong Dome Festival’ on July 1.

The outdoor concert will be four hours long with BoA, SHINee, EXO, f(x), Super Junior-M’s Henry, as well as local bands Mr and RubberBand performing. The concert is due to be held at the Kai Tak Development Site.

However this concert is now shrouded in controversy in the run up to the concert.

Due to this arrangement fans have been asking K-pop artists to boycott their performance.

One BoA fan wrote, “I love your songs and dance, but please do not go to Hong Kong on 1/ 7. BoA, please DO NOT make the show in HK on July 1. The government wants to use your fame to sidetrack the democratic event. Please consider, you are living in a country WITH democracy while we are not.”

A SHINee fan wrote, “”The concert you are attending is held at the same time as the march and I would really hate to see that you will be involved in some devious plot to try to undermine the Hong Kong people’s will to say No to a government which was not chosen by its people. Please rethink your decision to attend this concert,”

Organisers of the ‘Hong Kong Dome Festival’ have tried to play down the controversy. PIA chairwoman Florence Chan said to South China Morning Post (SCMP), “July 1 has become a day for Hongkongers to express their demands to the government. We picked this day because we wanted to show the government that we need a mega venue in Hong Kong so that we can stay competitive in the region.”

Tickets for the ‘Hong Kong Dome Festival’ were set at a cheaper rate because the organisers want to show the government that there is a need for a larger venue.

Jackie Hung Ling-yu from Civil Human Rights Front says that “the ploy would be in vain and protesters would take to the streets as usual (SCMP)” referring to what she believes as a distraction created by property developers.

There has been a Facebook Page set up already to support the boycott, so far gaining nearly 6,000 likes.

SM Entertainment has not said that it’s artists will pull out of the event and local acts Mr and RubberBand have announced that they will still be going ahead with their performance. But they will donate their earnings to charity.

RubberBand posted online, “We offer our sincere apology to fans who are disappointed in us. After a few days of consideration, we have come to the conclusion that we can voice our opinion on any stage, wherever it is (SCMP).”

“After the event, we will [join] the march. We call upon all those who care about Hong Kong’s freedom and political development to take to the streets and express their views on that day (SCMP).”

Ladies Code to Make Their Comeback in July