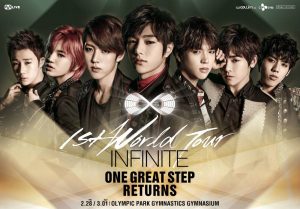 Infinite will reveal 3 new songs at their encore concert ‘One Great Step Returns’ although the boys haven’t released their comeback plans yet. Their label said, “At INFINITE’s Seoul world tour encore concert on February 28th and March 1st, 3 new songs will be revealed.” Infinite haven’t been able to release new songs since August of last year due to their world tour.

B.A.P To Keep Their Promise To Do Volunteer Service