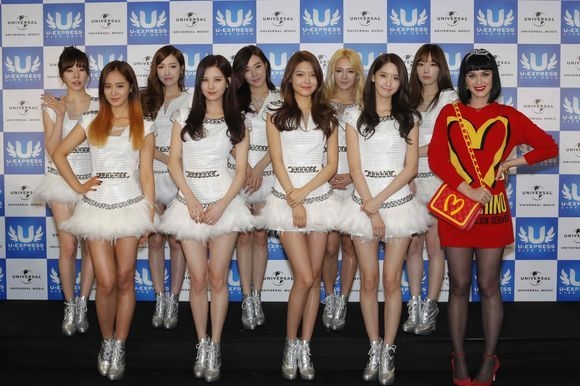 Girls’ Generation performed at Japan ‘U-Express Live 2014′ concert. This event was held from March 1-2, and was hosted by Universal Music. This year is the 4th year doing this event and gained much attention with the attendance of Girls’ Generation, Katy Perry and others. Girls’ Generation shared their thought, ” We were so happy to be able to attend this concert. It was such an honor to perform on the same stage as Katy Perry as well.”

Otherhand, Katy Perry also commented, “I’ve never performed as a team before and it was interesting and fun to meet Girls’ Generation. We had a great time talking before the press conference.”

Girls’ Generation performed “Mr. Taxi” and continued with “LOVE&GIRLS”, “Galaxy Supernova” and more for a total of 6 songs. The group will be making their comeback performance on March 6 on Mnet “M! Countdown” and kick off their 3rd Japan arena tour starting this April.