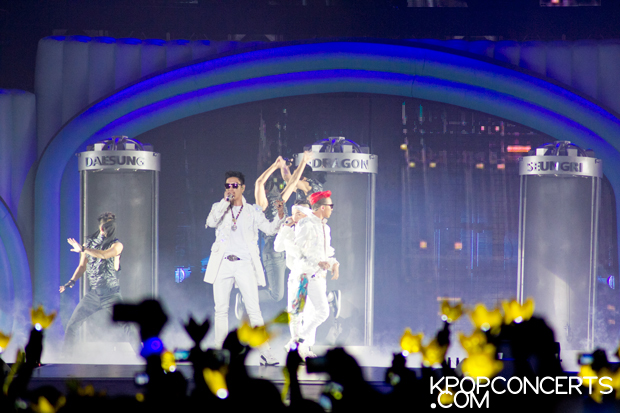 It seems like a long time ago since Big Bang played out their first concert in the UK as part of their Still Alive world tour.

Big Bang performed a range of songs as a group and solo such as “Haru Haru” and “Blue”.

See what our editors thought about the concert:

The 15th started out unlike any other day that week, the sun was shining and butterflies building in my stomach.  After hearing countless excited comments about how the first night of the Big Bang Galaxy ALIVE concert went, I could not wait for the day to get started.

The day went by quite quickly and at around 6 PM the doors to Wembley Arena were opened and the place was flooded by squealing fans. Fans gathered were made to sit down in the standing area in order to create some kind of organization; however that went out of the window when the MC announced that the start of the concert was approaching. The standing area turned into a frenzy zone as fans pushed to get as close to the stage as possible in order to see to their favourite stars. That was probably the only down side to the concert, as that frenzy turned a little dangerous with some fans choking, fainting and being pulled out by security guards.

The actual concert itself, well that was just out of this world! Big Bang kicked off their concert with ‘I’m still Alive’ sending the crowds’ screams into supersonic heights all while rocking the stage like the true performers they are. They carried on and transitioned effortlessly through their set list that featured solo performances from GD , Seungri, Daesung and Taeyang as well as the joint stage of TOP&GD.  Every couple of performances, Big bang took the opportunity to interact with their fans; Seungri attempting a british accent, Taeyang telling the girls in the crowd how beautiful they were and Daesung smiling endlessly and thanking fans for the love. Every single performance was absolutely fantastic; it made the crowd feel alive!

Some of my highlights were when Big Bang sang Haru Haru, the crowd fully joined in and sang the song word for word making the atmosphere around so electrifying. Other songs that were resonating through the arena were Fantastic Baby and GD’s Crayon. All I felt at that point was utter awe at the love and affection that was given to the boys on stage on top of the endless sea of crown shaped light sticks that were raised as high that they could go. Lastly not forgetting the encore performance which was just EPIC!

Overall, I could say that the BIG BANG ALIVE concert was probably one of the best concerts I had been to…ever!

After seeing the flash mob on 9th July 2011, G-Dragon was so grateful and said he would really like to come to London to perform and share a stage with the British fans. On 14th December 2012, BIGBANG kept the promise by performing at Wembly. Even though GD was ill, he performed a fantastic solo stage, Seungri spoke with a terrible British accent, and TOP did his special Bingu dance. The fans sang until they no longer could and everyone danced, sweating just as much as the members. The concert was simply perfect.[/box_light] [box_light]

The 2 Bigbang concerts in London were something that I, like other VIPs in the UK, had been hoping would happen for years. I went to both shows and can honestly say bigbang do not dissapoint, their performance was fantastic baby. It was definatelty worth the long wait.[/box_light] [box_light]

To summarize my Big Bang’s concert experience in one sentence, it was fun-filled craziness, upbeat vibe, fantastic performance and ever-lasting memories. I must admit that, before the concert, my ultimate K-pop bias was TOP and seeing him perform was my top priority. But the boys really made it impossibly hard for me to focus just on TOP!

After the concert, I love all five members. I normally prefer the MVs over Live performances but their LIVE performances were awesome and kept the crowd being on the high throughout the night. Three hours couldn’t go quicker than it did! Seungri’s English accent and his jokes were unstoppable throughout the night; he really is the president of fan service in Big Bang!

Taeyang’s sexy R&B accent and his fan service were not to be beaten by Seungri’s.

Daesung’s English speaking was so sweet, he said that he has been waiting to come to UK and he told the fans to enjoy the show. I must say he looked rather hot in purple hair! When he threw his jacket to the crowd, everyone in that area dived to the floor and there was a war! What can I say about the leader? GD was overloaded with swag, the highlight for me was when he rapped a few sentences of “Crayon” in English.

Last but not least, my bias, TOP, he didn’t speak much English during the concert but when he did, e.g “We’ve gotta a party going on,” the crowd went wild. He definitely got the loudest scream. He also performed a “dougie” dance, which was so cute! It must have taken him a long time to practice knowing he doesn’t like to dance!
Overall, I’m really impressed with all the members and feel so touched by all the efforts they have put into learning English and the fantastic concert! I will buy their concert ticket again without a doubt![/box_light] [box_light]

There are not a lot of words you can really say to describe the BIG BANG ALIVE GALAXY concert, but if you do get the chance to go to one then there I will be a 99.9% that you will be speechless. This is because it is not a lie when someone says it is one of the best concerts ever. Throughout the whole concert I was standing therefore I was dying throughout the whole thing. There was so much pushing that I have bruises on my body and there were times when I was about to faint but despite that I was in third row and the things that I saw was amazing; in the end it was worth it.

Each song they did was just breathtaking and their voices and dance moves were just like out of the music videos. “Haru Haru” is a very special song, so when it came on all the VIPs was singing it, there was no slurring or mumbling of the words; shows that VIPs knew the lyrics which touched the Big Bang members and VIPs hearts as you can see tears forming. The fan service made the fans scream as it was priceless; the things that come out of the member’s mouths just brighten your day. I can say so many more things but that could last pages but in honesty I am just thankful and honoured that they came here I am able to say I was part of the yellow sea.
BIG BANG ALIVE CONCERT is truly OUT OF THIS WOLRD![/box_light] [box_light]

Best concert I’ve ever been to, this being my favourite band kpop or no kpop and seeing them live in concert lived up to every expectation i had. I was privileged enough to be able to experience sound check,though if im honest it was too short for the amount spent (20-30mins) but I got to see them up close so I have no regrets. The concert itself was jammed packed with their biggest hits Big Bang sure did live up to their name with their amazing stage present,live singing and energetic dance moves.

Highlight: TOP solo dance near the end and Seungri trying to do a British that left the crowd in stitches….overall my experience was wow fantastic baby.
[/box_light]