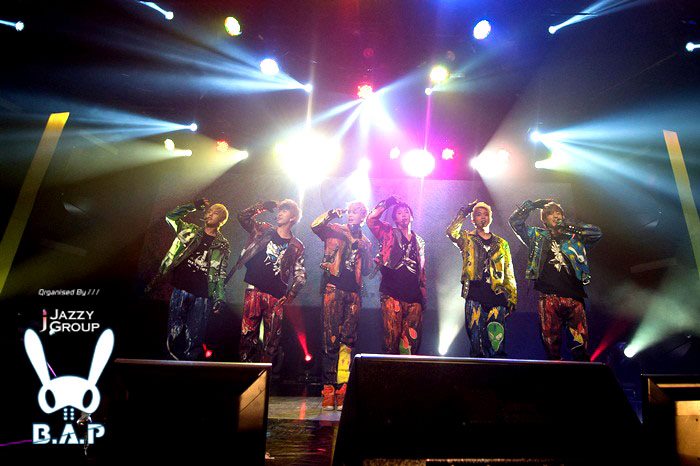 B.A.P(BEST ABSOLUTE PERFECT), consisting of 6 members which are Bang Yongguk, Kim Him Chan, Jung Dae Hyun, Yu Young Jae, Moon Jong Up and last but not least the youngest in the group, Zelo! B.A.P is a new rookie group which just debuted not a long ago back in January 26, 2012 with their debut single ‘Warrior’.

B.A.P had just successfully completed their showcase in Malaysia which was held at KL Live, Life Centre, Kuala Lumpur.  The showcase started at 8.30p.m. sharp with the intro of a video of each of the members name, and some cuts from the Warrior MV. Babys began chanting to each of the member’s name as all of the fans can’t wait to see them on stage. After the intro, 6 members of B.A.P started off performing their hit song ‘Power’ as the video shown below. Fans were chanting even more loudly this time. This showcase attracted fans from Thailand, Germany and Indonesia too!

After performing ‘Power’, B.A.P also performed another 2 tracks from their ‘Power’ album which is ‘Unbreakable’ and ‘What The Hell’.

Next, B.A.P starts off with their solo stages. Bang Yongguk and Daehyun performed the song “I Remember”, Jong Up performed a dance medley, Zelo performed ‘Never Give Up and last but not least that makes all Babys high were when Him Chan, Young Jae and Daehyun performed “Baby”. BABYs sang along with Daehyun, Him Chan and Youngjae. Three of them were really happy while performing this song as all BABYs sang along to the song too.

Each of the B.A.P members picked a question that were asked by Babys during the Q & A session with Babys. Daehyun was asked to show his abs, but he refuses to show it because he said his abs were not ready yet. He promised us that he will show us one day soon. Instead, of showing his abs, he did a cute dance to the song “Baby” that he performed earlier. Every members fulfilled the questions that were asked by fans. Jong Up showed some of his Bboy Skills too.


B.A.P continued performng “It’s All Lies” and “Secret Love”. Right after the Q & A session. They were wearing white suits while performing these 2 songs.

The showcase ended with B.A.P performing their debut single “Warrior”. The fanchants were really loud this time. After the showcase, a fansign event was also held for only 100 VIP ticket holders. While they did their fansign event, all Babys sang a ‘Happy Birthday’ song in Korean for Daehyun, as his birthday pass few weeks ago. Daehyun was surprised, and thanked us. Daehyun was really happy that we sang for him, and Yongguk also showed a good sign to us.

B.A.P pictures can be viewed at this link : http://tinyurl.com/7ve2h2o