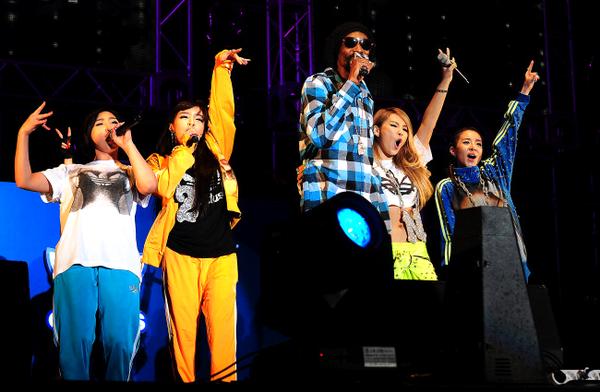 American hip hop legend Snoop Dogg did his first concert in Korea over the weekend in Seoul.

Snoop Dogg played out to a packed audience at the Olympic Park in Seoul. His first concert, “Unite All Originals Live with Snoop Dogg” was on May 4. 2NE1 joined him on stage during his performance of “Drop It Like It’s Hot”.

Snoop Dogg also performed “Here Comes the King“, “Gin and Juice“, “Nothing But A G’ Thang“, “I Wanna Love You“, “The Next Episode“, “Signs“, as well as other hit tracks.

He commented later on his impressions of 2NE1 saying, “2NE1, I love you. It was an honor to have performed with you girls. While practicing together I noticed that this group has such chemistry.”