After a month of waiting KBS have finally released a still from their upcoming drama “Dream High 2” with all 6 leading members. 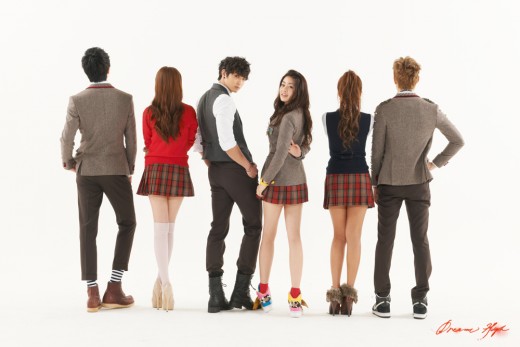 It was revealed earlier this month that Jung Jinwoo, Kang Sora, (who are seem facing the viewer in the still above) Jiyeon (T-ara) and Hyorin (SISTAR) will be 4 of the main 6 lead actors, however identities of the other 2 male actors have not been revealed as of yet.

Producers are purposely keeping their identity a secret to exclusively reveal at the drama’s production conference. In addition to that producers have mentioned that the original cast will be making appearances in some of the upcoming episodes.

KBS have also revealed BTS pictures and footage of the cast filming their scences.

Check out the BTS picture and video that features JYP, Jinwoo, Sora, Kahi, Yoo Soyoung below.

Miss A Performs Goodbye Baby in Chinese For The First Time