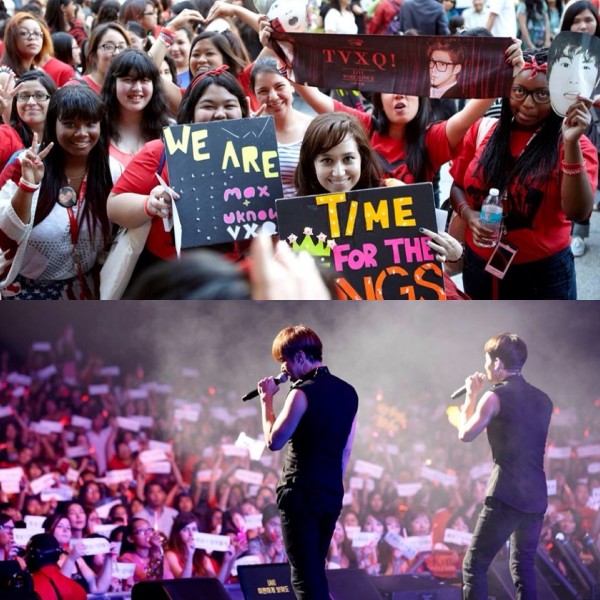 Wish come true!  With over ten years of waiting, US Cassies‘ wish was finally granted – the first US solo concert tour of TVXQ called Catch Me World Tour.   Its latest pit stop was at the Nokia Theater in Los Angeles last July 5.

Hours before the concert, thousands of Cassies congregated outside the venue in Nokia Plaza.  While waiting, TVXQ’s official fanclubs FYTohoshinki and DBSKnights handed out glow sticks and hand banners with the words “항상있어줄게“ (“We will always be there“) which were to be held up when TVXQ sings “I’ll Be There.”

Also prior to the concert, KCON surprised fans by hosting a TVXQ “Catch Me” Flash Mob!  The flash mob was a success as over a hundred participants jumped in and gave it their all.  The rest of the attendees formed a large crowd around the group in middle of the plaza, syncing a resounding fan chant with the beat of the mixed songs of the group.

Having only come face-to-face with their US fans for SMTOWN concerts, TVXQ pulled out all the stops at their LA concert.  As soon as the lights dimmed signalling the start of the concert, the entire venue was lit up with a red glow from the glow sticks given to the fans earlier.  Yunho and Changmin made their grand entrance suspended up in the air trailed by two red orbs, hinting at their opening song, “Rising Sun.”

Numerous fan accounts had stated that TVXQ sounded better live than in their recordings… well, they’re not joking.  The group’s rendition of the “Rising Gods of the East” definitely did just that.  What a phenomenal show!  They also performed their hit tracks like “Humanoid,” “Why? (Keep Your Head Down),” “Catch Me,” “Before U Go,” as well as tracks such as “Like A Soap” (where their backup dancers were dressed up as insects and pestered the duo onstage), “Destiny,” “Getaway,” “I Don’t Know,” and more.  TVXQ also treated fans with earlier hit songs from back when they were the original DBSK, such as “Mirotic,” “Wrong Number,” “Purple Line,” and many more.

The Kings of K-Pop did everything they can to be “one” with their fans.  During their introduction, Yunho and Changmin were greeted with high-pitch screams as they spoke in English and Korean. Changmin particularly had the fan girls worked up when he said, “I didn’t realize how beautiful California girls were,” which raised the scream-0-meter to an even higher level at the maknae’s fluent English.  Changmin showed off his English by serenading fans with his cover — Maxwell‘s “Wherever Whenever Whatever.”  Not to be outdone by his partner,  Yunho also showed off his natural charisma through a sexy dance routine to“Hunny Funny Bunny.”

Not part of the show, however, was the minor mishap with Yunho.  During one of their songs, the duo were so energized and hyped up, playing around with their backup dancers and having water poured on them in response.  Yunho attempted to do a back flip set up by one of his dancers, but lost his footing, and hit is head.  Everyone gasped and screamed.  Fans in the pit section heard the painful impact and were very concerned.  But being a great showman that he is, Yunho was quickly back on his feet, shook it off, and jokingly yelled, “WOW, I almost died!”  Like all live performances, the show must go on.  Yunho showed great showmanship as he finished the song, but also bravely walked through the crowd!

To further bring fangirls closer to the brink of insanity, Yunho and Changmin walked through the audience – TWICE.  The boys (oh how courageous they were) slowly made their way through the Orchestra sections and all the way back to Loge while being surrounded my masses of fangirls reaching out for them and the security guards who tried their very best to fight off the mob.  Through both chaotic events, the boys made it out fine without any incidents whatsoever.  Once on stage, they stated that this was their first time walking into the audience and were glad they could be “one” with Cassies.

Their overwhelming amount of endearment for their fans were returned tenfold during “I’ll Be There.” As they serenaded the fans, Yunho and Changmin were greeted with thousands of the “항상있어줄게” banners swaying to the beat. Staring back with awe and happiness, the boys poured out their hearts for the rest of the song.

The boys had earlier stated that they were surprised by the number of fans they had in America.  The turn out at the concert proved just that and more, a concert experience that will always be remembered by both the fans and TVXQ.

Check out the official photos from the concert below! (credit: TVXQ’s official Facebook page.