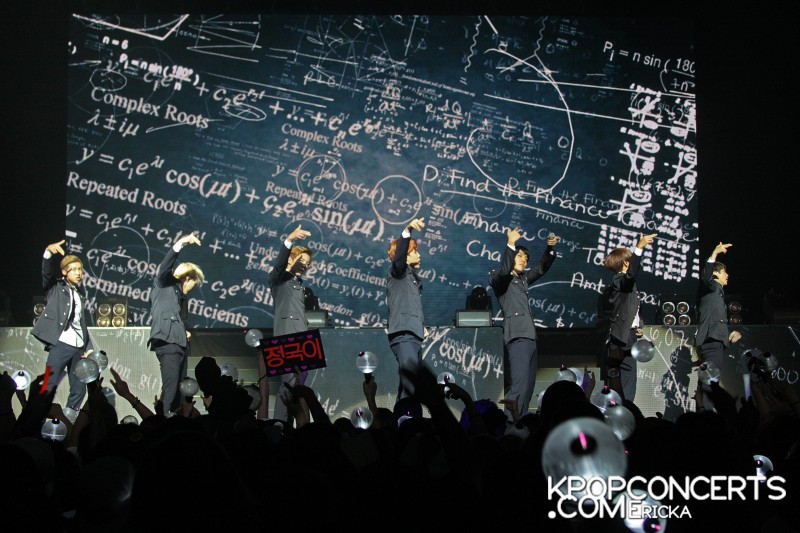 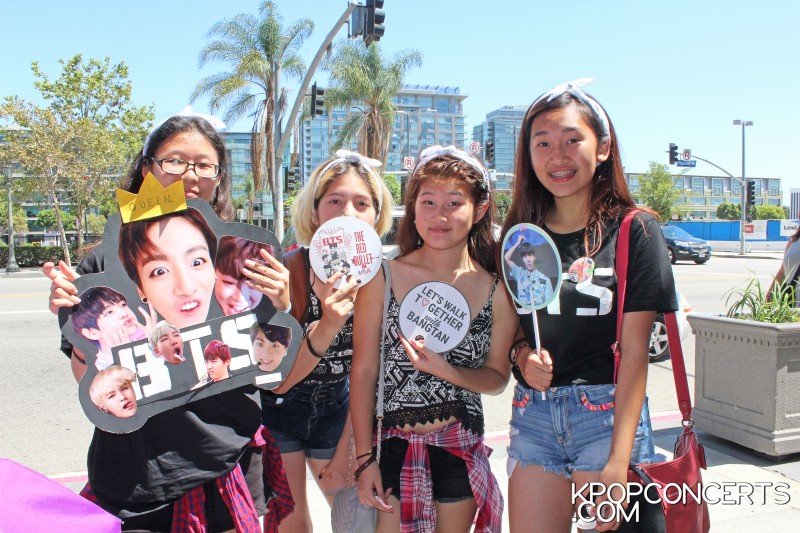 Eager fans queued up outside Club Nokia as early as 10PM the night before in order to guarantee a great spot at the sold-out show. By the time the hot summer’s blazing sun reached its peak the following day, hundreds of LA ARMY were camped out and sprawled across the Nokia Plaza, winding as far back as the neighboring Microsoft Theatre.  Confused passersby asked what the huge line was for and were surprised to learn that it was a “Korean hip-hop group.” A priceless reaction. 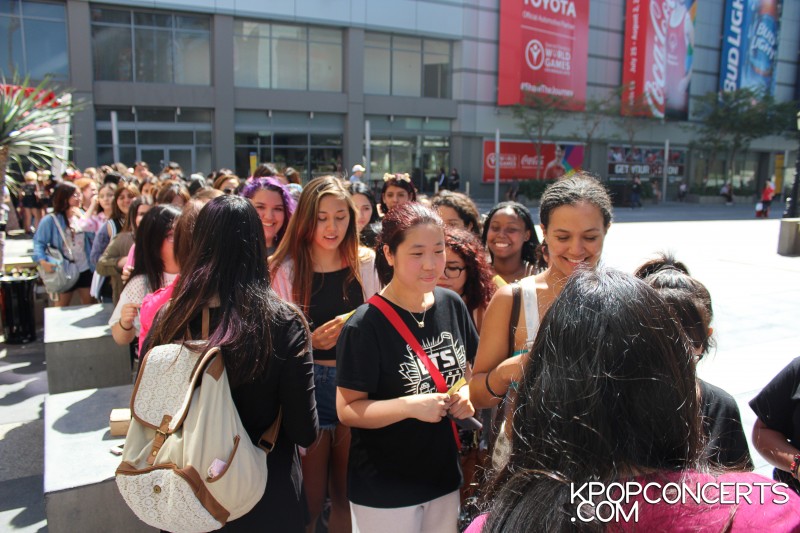 So how do fans keep busy during the long, restless hours? Freebies galore! A handful of BTS fan clubs passed out freebies throughout the day that resulted in a large scavenger hunt. Once the fan clubs posted their exact locations, ARMY searched the entire Nokia Plaza in order to get their hands on fansite photo cards, stickers, banners, and even BTS CDs and other merchandise for a few lucky giveaway winners. One fanclub came prepared and packed snacks in their goodie bags that included Choco-pie and Jin Ramen (yes, pun intended). Attendees bonded over their favorite members, performed their favorite BTS choreography, and even started singing fanchants in line. 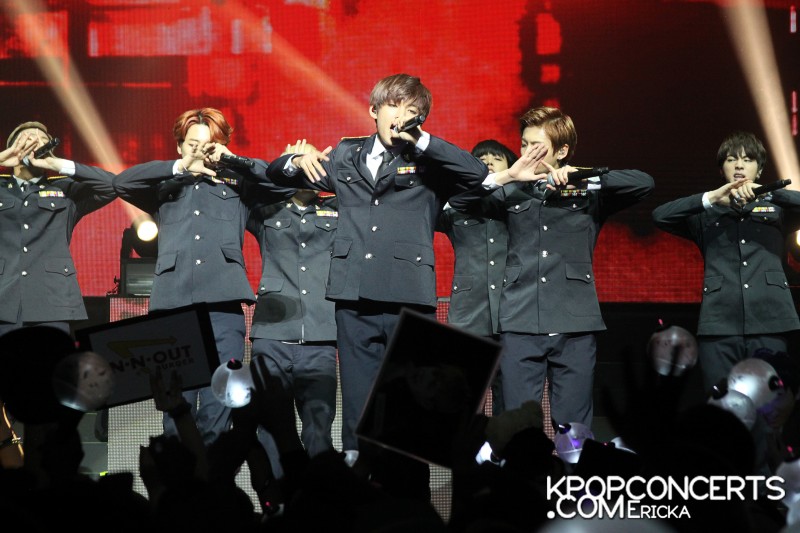 Even with their tight, exhausting tour schedule, BTS was nothing short of outstanding.  Once the show began, the whole venue was lit by the sea of official Army Bomb light sticks. The members showcased their unmatched teamwork and professionalism as they sang, rapped, and danced almost non-stop. They kicked off the night with “N.O” and “We Are Bulletproof Pt. 2,” both powerful hip-hop tracks from their early debut that had ARMY up and jumping, literally shaking the floor of Club Nokia. They continued with their hip-hop streak and performed “We On” and “Hip Hop Lover.” 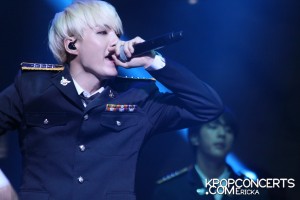 BTS then took their places around the stage and poured their hearts out with an emotional rendition of  “Let Me Know” and “Rain.” As much as fans loved listening to BTS’ hip-hop and R&B tracks, the septet changed it up with their even sweeter songs “Blanket Kick” and “Just One Day.” Their soothing vocals and adorable dance moves had all the fans smiling and singing along as the boys danced around a makeshift bed, couch, and chairs. A highlight from the show was how actively engaged the crowd was. During “I Like It” and “Miss Right,” the romanization of the Korean lyrics were displayed on the LCD screens (although ARMY already knew all the Korean lyrics and fanchants by heart.)

The bulletproof boys even had cute fanservice prepared by playing a game of rock, paper, scissors and having the losing member perform aeygo for the fans during “Look Here.” Much to his dismay, fans were able to see Jungkook perform a cute, yet dorky dance and a dash of Suga’s aegyo that was encouraged by the other members.  The vocal line (Jin, Jimin, V, and Jungkook) serenaded the crowd with “Outro: Propose,” while the rapper line (Rap Monster, Suga, and J-Hope) turned up the heat and roused the crowd with “Cypher Pt. 3: Killer” and “Cypher Pt. 2: Tripytch.” 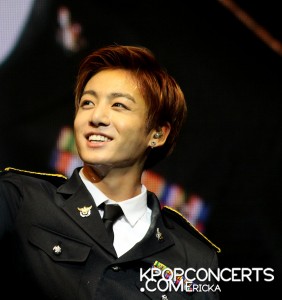 The boys were extremely considerate of their audience and went the extra mile by speaking entirely in English throughout the concert. All seven members expressed their gratitude to be able to return to Los Angeles, the city they love, and for all the fans’ support over the past two years. J-Hope kept the crowd laughing and cheering when he repeated his favorite catchphrase, “I’m your hope! I’m your angel!”and demonstrated his joy through his animated movements and gestures.  V, being the jokester as he is, fake cried to show how touched he was to see the support they had received from LA ARMY. Suga got personal with fans as he mentioned that he considered L.A. his “second home.”

BTS pumped up the crowd once again with their top hit and fan favorite songs accompanied with their acrobatic, intricate choreography.  In “No More Dream,” Jimin lifted up his shirt and flashed the crowd with his toned, choco-abs that have to be seen to be believed.  When “War of Hormone” came on, fans held up fan banners that said “Bangtan is the best present!“, a pun on the song’s lyrics.  “I Need U” had the fans singing in sync with the boys as well as doing some of their signature dance moves.  However, it was when BTS performed the fast paced choreography from “Dope” that fans completely lost it and went crazier than ever before.

During their encore performance, Jin playfully took a fan’s light stick and started waving it around. Much to his surprise, the top broke off and dismantled parts flew in every direction. Embarrassed and shocked,  Jin awkwardly returned the handle and repeatedly apologized to the fan and pointed to where the parts landed throughout the remainder of the show. To make up for it, Jin gave her his towel he had been using. (He also accidentally threw the towel over her head, but a kind ARMY gave it to her). 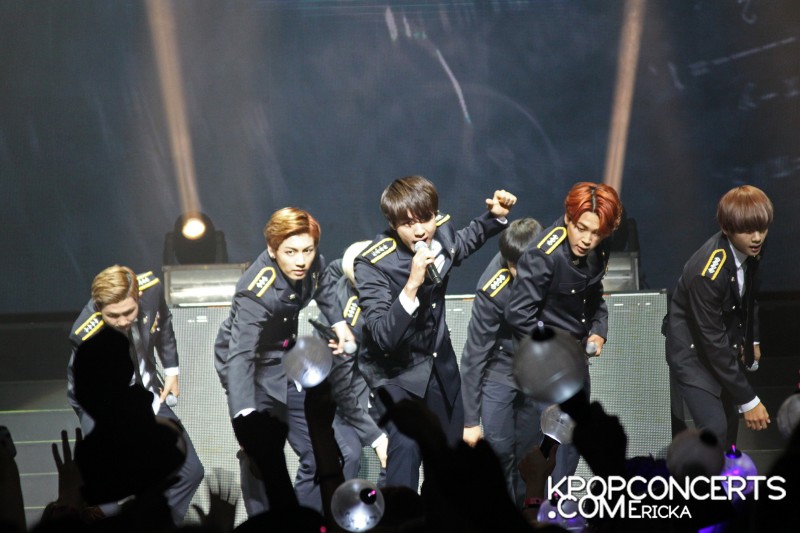 Overall, the last U.S. leg of  The Red Bullet World Tour in Los Angeles blew everyone’s mind.  BTS gave their 110% throughout the show and the LA ARMY gratefully reciprocated the energy by giving the boys a white ARMY ocean, adoring screams, and word-for-word fanchants.  The show was sold-out so fast that many ARMY missed the phenomenal experience. But don’t fret! The boys hinted of an Episode III in the U.S. in the future – hopefully in the very near future. Click the link below to see our exclusive photos from the show!