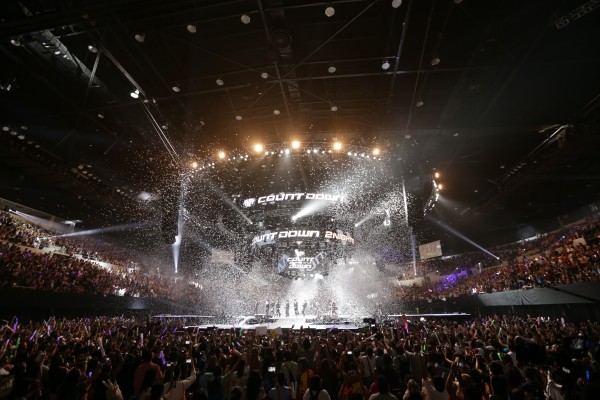 KCON veterans VIXX opened up KCON 2014 with a bang! The group was one of the first artists to be invited to perform at the first KCON convention back in 2012.  Happy to meet their fans once again, the boys performed their hit songs “Eternity,” “Only U,” “Voodoo Doll,” “Light Up the Darkness,” and “On and On.” 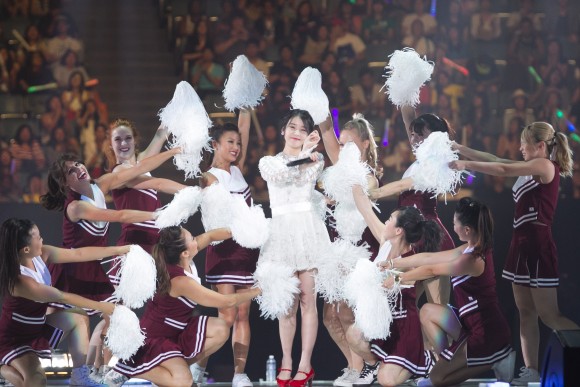 Second artist to grace the stage was Korea’s songbird, IU.  The angelic singer kicked off her first ever performance in L.A. with “Red Shoes,” “You and I,” “Friday“ (accompanied by Teen Top’s Niel), “Good Day,” and “Hey (You Know).”  Exhibiting powerful yet effortless vocals, the dainty singer blew the audience away with her infamous 3-octaves. 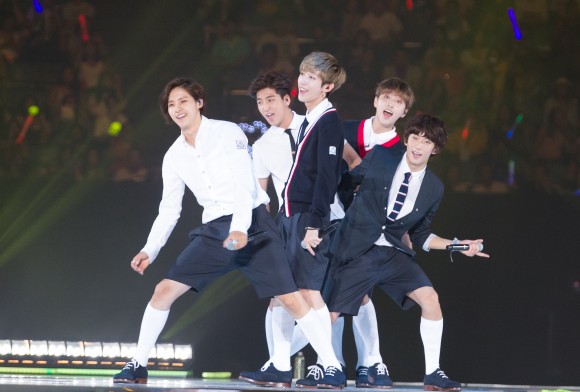 The ever-charismatic members of B1A4 then pumped up the crowd with “What’s Going On?,” “Lonely,” “Solo Day,” “Baby Goodnight” and closed off their set with “A Glass of Water.” Keeping up with the theme, each member armed himself with a water gun and pelted fans with a cool spritz. 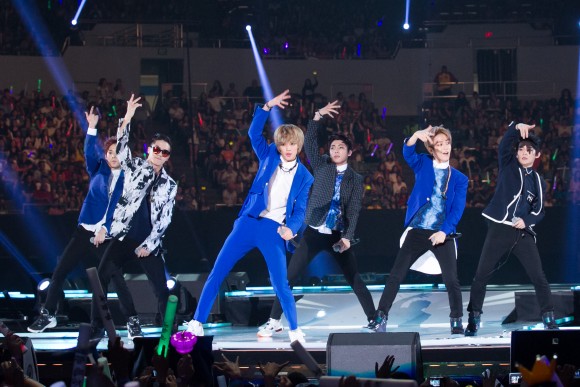 To heat things back up, Teen Top started off with “Rocking,” the electro-dance track that was first revealed to the world back last year on the KCON stage. The group exhibited precision and punctuality as they performed their other upbeat tracks, “Crazy,” “Miss Right,” “To You,” and “Rock Star.” 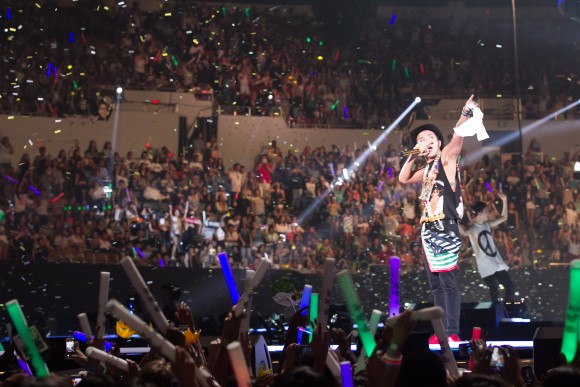 Wrapping up the night was none other than the charismatic G-Dragon.  The whole arena erupted in ear piercing screams as everyone rose and chanted his name as he performed his killer tracks, “One of a Kind,” “Crooked,” “Who You?,” “Crayon,” and “Michigo.”  The influential rapper undoubtedly commanded the stage with his swagger and showmanship, ending Day 1 of KCON 2014 and leaving fans asking for more. 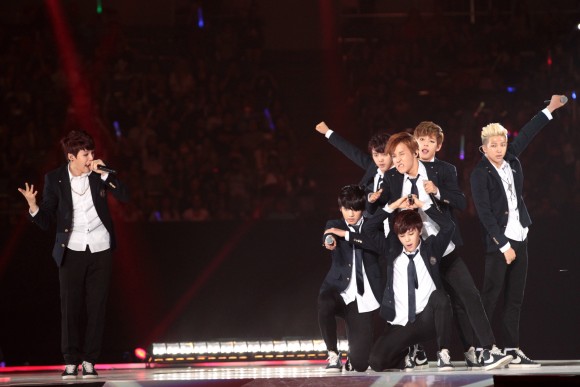 BTS set the bar for Day 2 with their stellar performance.  The hip-hop rookie-dols showcased their synchronization and versatility while faithful A.R.M.Y.s sang along to ” Boy in Luv,” “No More Dream,” “We are Bulletproof (Pt. 2),” I Like It,” and “Rise of Bangtan.”  This marks the group’s second time in L.A. after coming here last month and unexpectedly filmed their own reality show, American Hustle Life, which is currently airing on MNET. 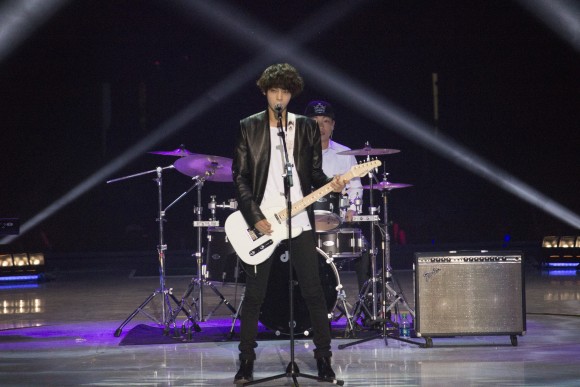 Next, Korean rocker Jung Joon Young belted his heart out with “Teenager,” “The Sense of an Ending,” “Hold On,” “From Me to Me,” and a special rock cover of the legendary Michael Jackson’s song “Black or White” alongside BTS’ leader, Rap Monster.  While most rockers would just stay by their mic stand and strum their guitars, Joon Young and Rap Monster got down and shimmied around the stage, showcasing their best Michael Jackson moves they could muster up.

Up-and-coming girl group, Spica, wowed the crowd with their amazing vocals while performing “You Don’t Love Me,” “Tonight,” “Painkiller,” a cover of Backstreet Boys’ “No Diggity,” and their new U.S. single, “I Did It.”  The girls have caught the attention of many top American producers and have big plans in store for them in terms of international promotions.  Definitely keep an eye out for this talented group! 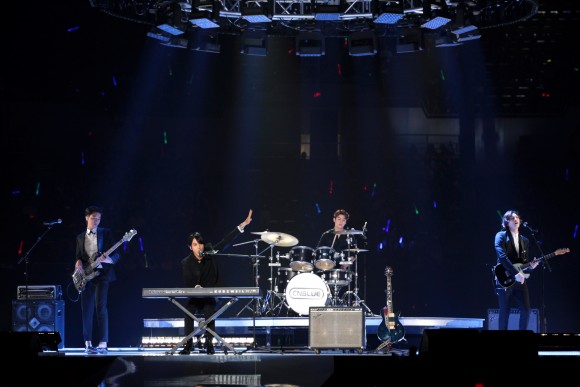 Following SPICA’s performance was one of Korea’s most beloved bands, CNBLUE! The boys had flown into L.A. from Kuala Lumpur, Malaysia only hours before their performance yet showed no signs of fatigue or jet lag as they rocked out onstage.  The band had BOICEs jumping up and down for their favorite songs such as “Can’t Stop,” “I’m a Loner,” “Intuition,” and “Love Love Love.” 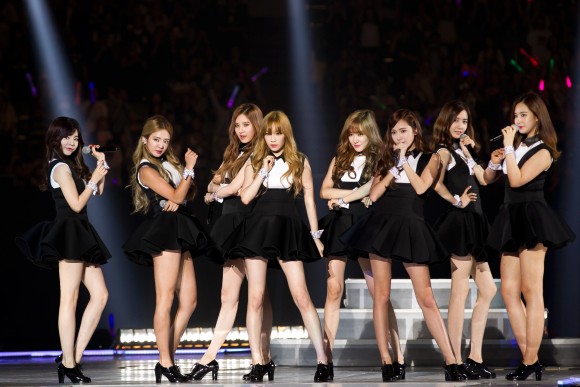 Finally, what many SONEs had been waiting all throughout the night for, Girls’ Generation sparkled and shined onstage while performing Kpop’s game-changing songs like “Genie,” “Mr. Mr.,” “Mr. Taxi,” “Hoot” and everyone’s favorite, “Gee.”  The girls’ (sans Sooyoung) had recently celebrated their 7th year anniversary and expressed their gratefulness to their fans by treating them with an acapella version of their debut song, “Into the New World.”

What made KCON amazing for many was the diversity of artists.  Some fans attended KCON with only knowing one or two groups, but by the end of the night, became a fan of all of them.  “I honestly came only for G-Dragon.” said one fan, “But, wow, after watching everyone else perform, I’m gonna go home and look them up!”  KCON brought together fans of all ages and delivered another phenomenal event that any K-pop fan could ask for.