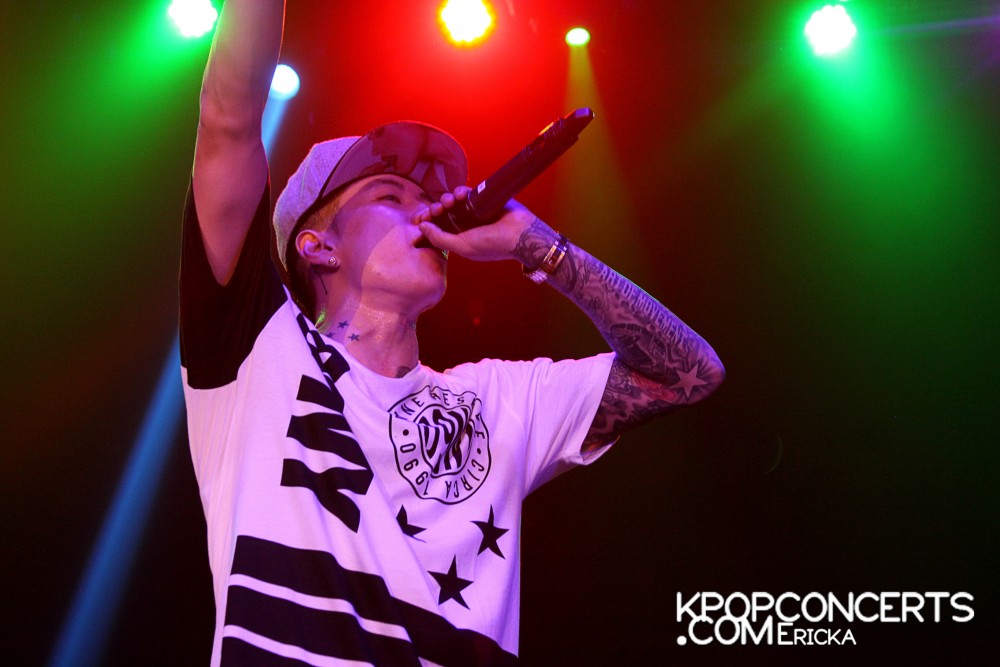 On November 14th, popular Korean hip-hop record label AOMG (Above Ordinary Music Group) commenced its three-city US tour in Los Angeles, at the Belasco Theater.  AOMG was founded in late September 2013 by former idol-turned-solo-artist Jay Park who aspired to create Korea’s most distinguished hip-hop and R&B record label.  This being their first family concert in the States, Jay, Loco, Gray, Simon D, and DJ Pumkin made sure it would not be a day to be forgotten. 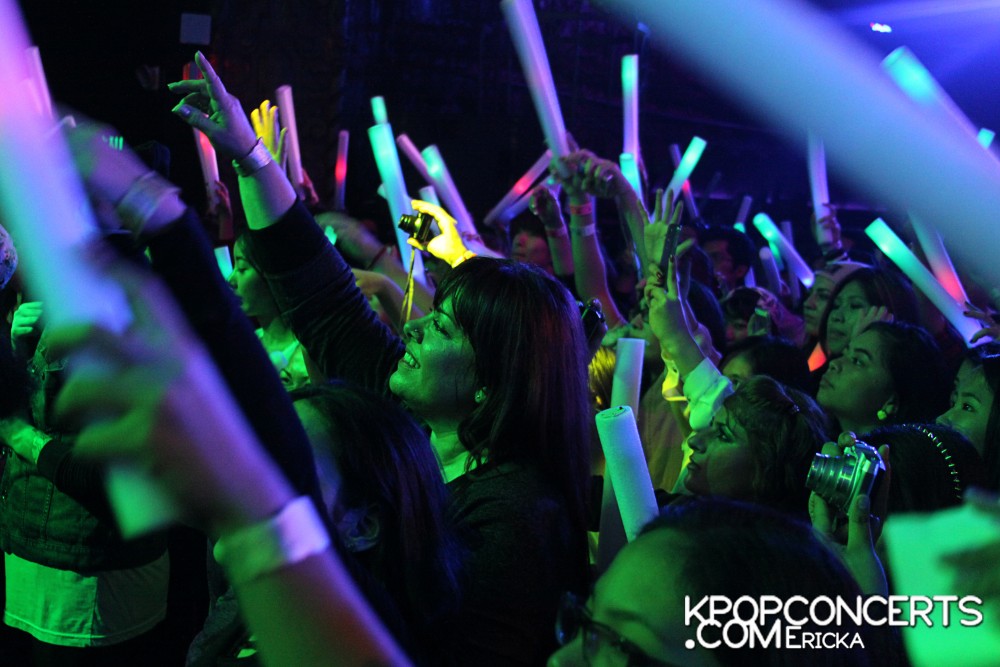 Hip-hop fanatics from different parts of the West Coast flocked to the popular downtown venue that has previously hosted the successful Asian Music Festival back in May.  Lucky VIP holders were able to not only take a spot by the stage, but also were invited backstage for the meet-and-greet with the artists .  After the meet-and-greet, AOMG’s DJ Pumkin took his place behind his sound mixer and the roar of eager screams and hollers blasted throughout the venue – the show was about to begin. 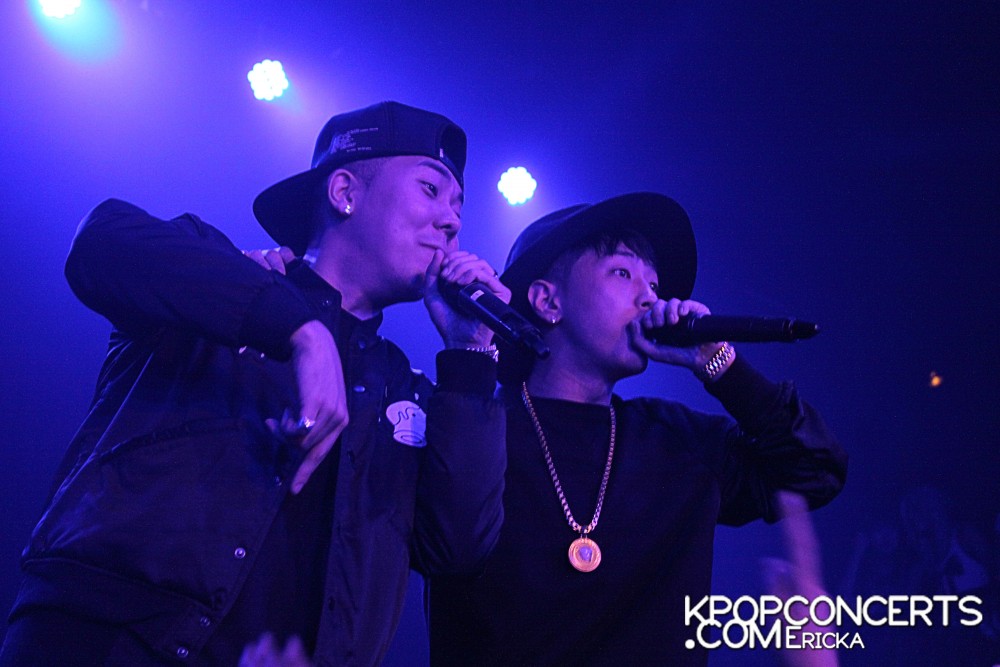 First to greet the anxious fans was Loco.  The rapper made his big break when he won the first season of Korea’s popular hip-hop talent show Show Me the Money and has established a strong fan base ever since.  Loco jumped on the stage and had everyone put their hands in the air as Belasco staff launched hundreds of light sticks into the crowd.  Armed and pumped, the crowd was well-equipped for the long show ahead of them.

Joining him on the stage was AOMG’s producer and artist, Gray. 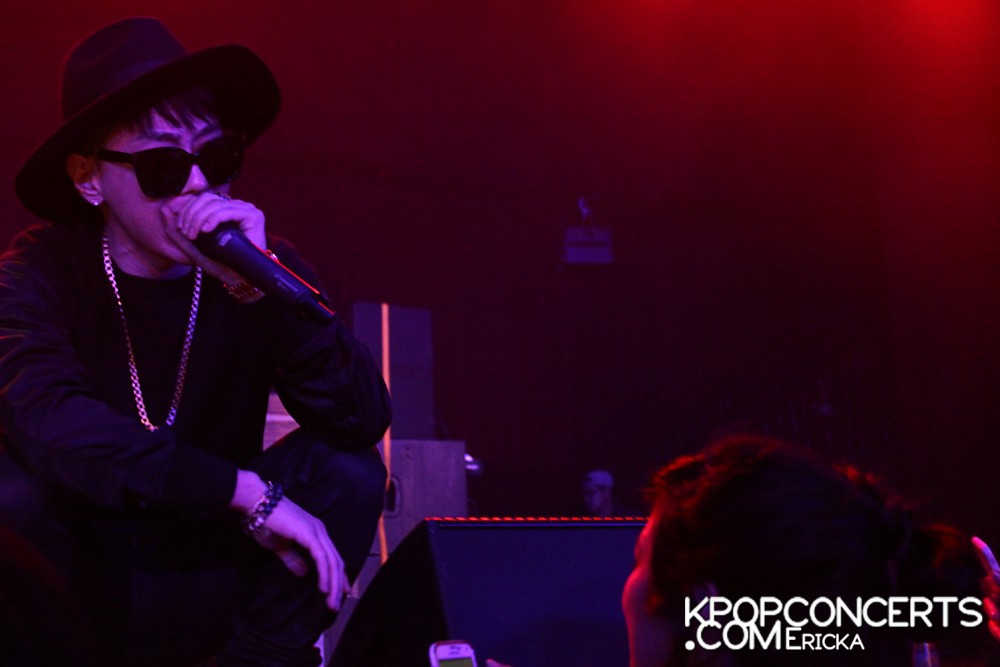 The charismatic rapper was one of the first artists signed to AOMG and regularly produces hot tracks for the label as well as other hip-hop artists such as Dok2 and Swings.  Together, Loco and Gray performed an array of their hit songs including “Dream Chaser,” “Hold Me Tight,” “Dangerous,” and “In My Head.”  In the middle of his performance, Gray knelt down on the front of the stage, singled out a young woman in the front, and personally serenaded the lucky fan with his rapping.

One of the most touching moments was when Loco performed “Home,” an emotional track first performed on Show Me the Money.  The song was dedicated to the rapper’s late father and the lyrics expressed his vow to repay his parents and make them proud. Less than an hour into the show, everyone in the theater were all wired up and ready for more. 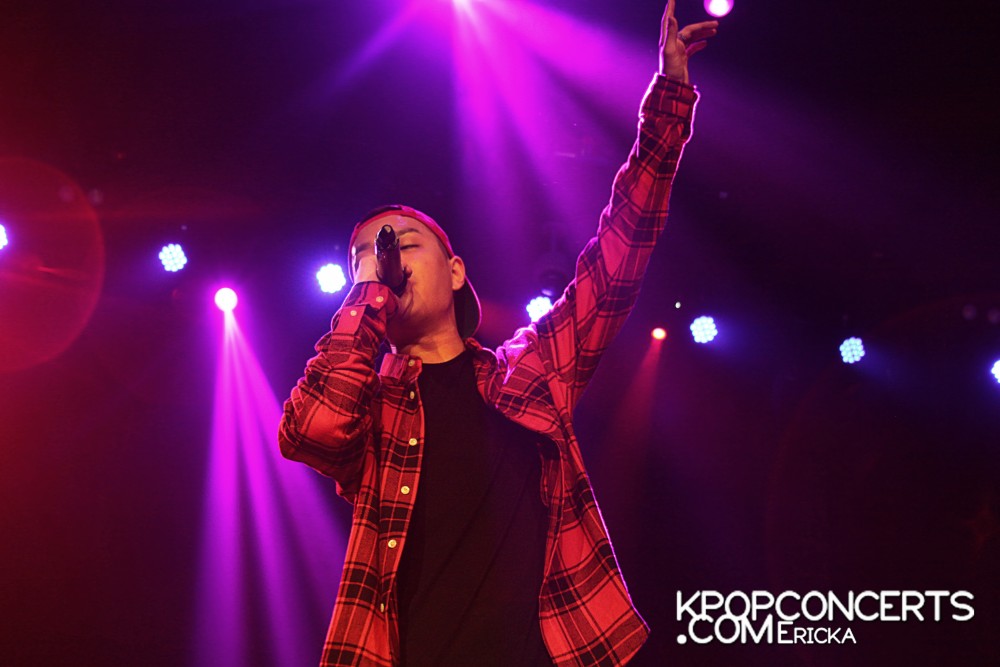 Next to heat up the stage was the O.G. himself, Simon D.  No stranger to the music scene, Simon D debuted back in 2009 in the hip-hop duo Supreme Team before going solo and eventually becoming the co-CEO of AOMG. 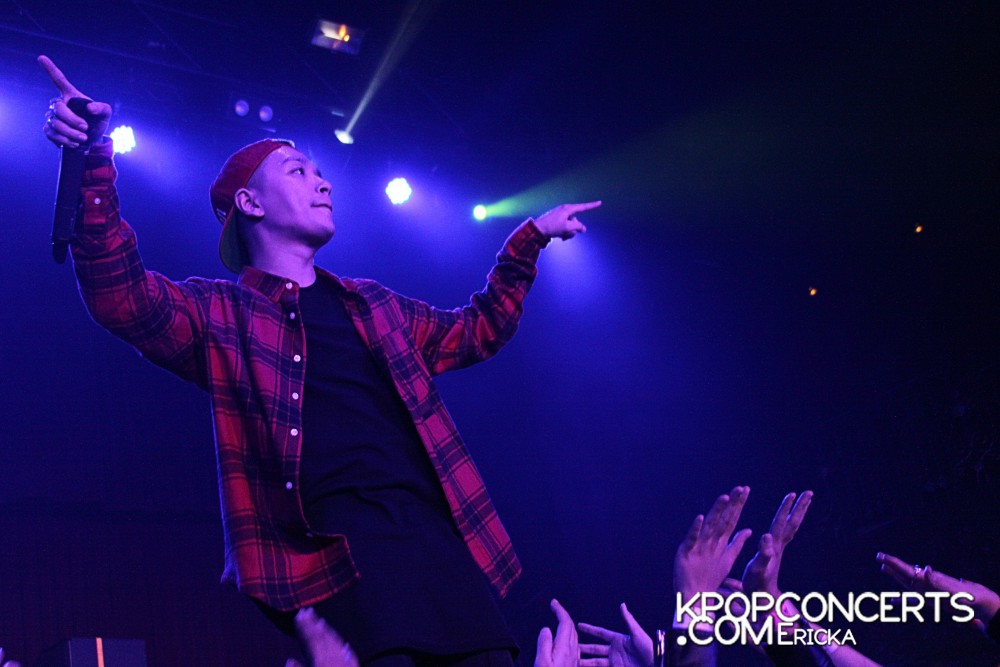 He was welcomed by ear-piercing screams as soon as he got on stage.  Fans “got down” to the crowd favorite, “Simon Says” and were mesmerized by Simon D’s sick raps in “Stay Cool,” “Money Don’t Lie,” and “Where U At.”  In between songs he conversed with his fans in English, introducing himself, belting his Busan pride, and claiming that “LA is like my second home.”  One fan repeatedly begged him to take his shirt off, to which Simon D comically replied, “T-take it off!? No, I’m not Jay,” earning giggles from the crowd. 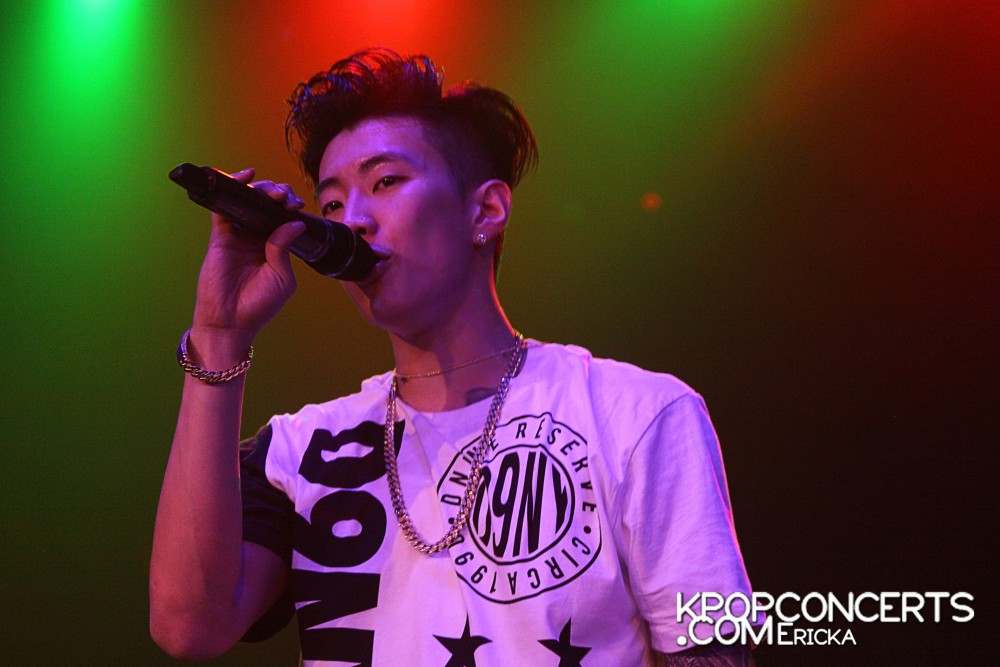 Speaking of the star, Jay Park was up next and the whole venue erupted in a chorus of fan-girl squeals as he and two backup dancers took to the stage.  Since he went solo, the singer has proved to be one of the most dedicated and hardworking artists around. 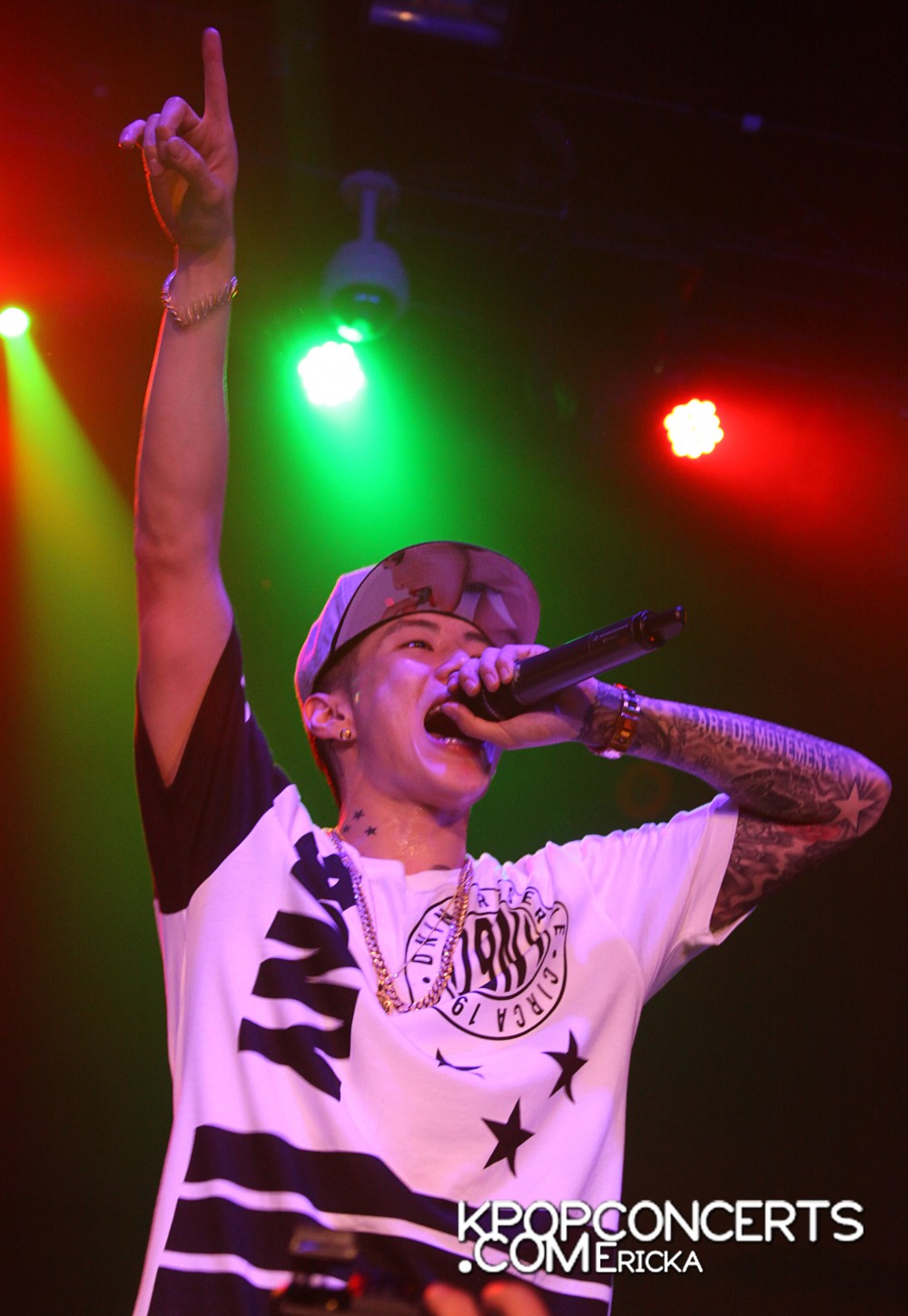 Jay was a nonstop fan-service machine, showcasing his intricate b-boy tricks that had the fans swooning as he performed with a medley of “Know Your Name,” “Body2Body,” “I Got Your Back,” and “So Good.”  Then he took it down a notch and serenaded fans with “Star.”  Before jumping into his next song, he teased and stated that he was looking for a “Girlfriend” (cue the uproar from hundreds of more-than-willing fan girls.)  As if the screams could not get any louder, the fans went absolutely nuts as Jay stripped, taking his sweater and shirt off and showing off his infamous choco-abs.

Jay mentioned that he had been working on a mixtape with the intention of performing it for the first time for his LA fans.  Unfortunately he was unable to finish it on time due to his tight schedule, along with a severe case of jetlag.  To make up for it, he treated fans with “Count on You (Nothing on You),” his Korean rendition of Bruno Mars’ infamous song. 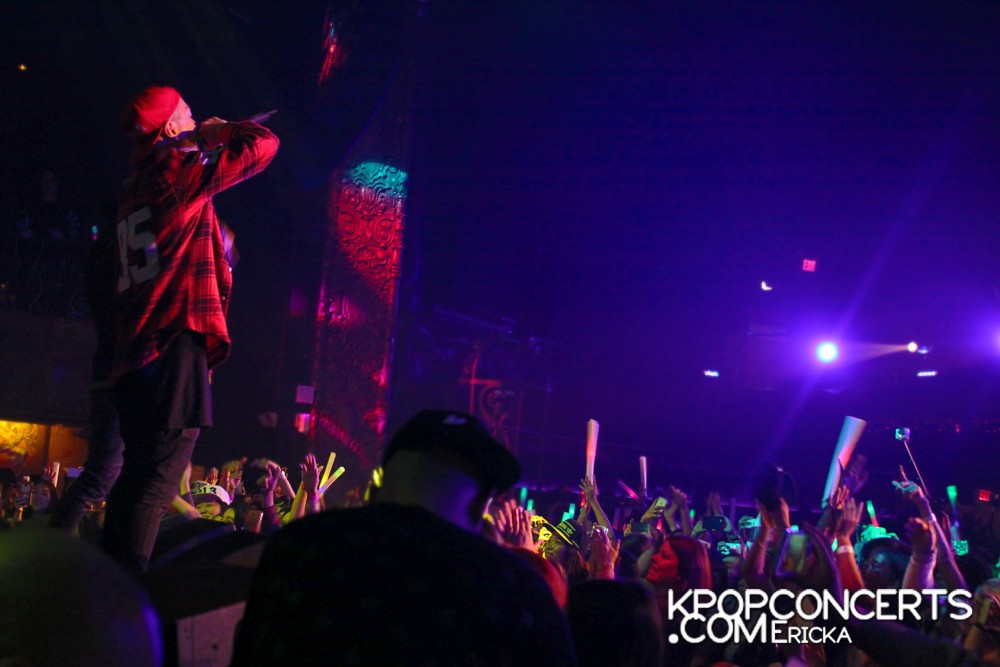 Finally, with the show coming to an end, the whole AOMG family (and friends Ben Baller and Chacha Malone) came back onstage to make sure it went out with a bang.  At this point, all the performers let loose onstage and had the whole venue up on their feet as they sang/rapped to Jay Park’s “Metronome.”

T-ara to hold their first Korean concert on Christmas Day